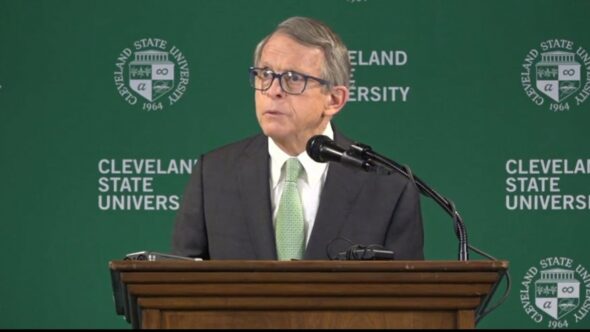 COVID-19 update— Vaccine eligibility for all to open March 29

On Monday, March 29, all Ohioans 16 and older will be eligible to receive a COVID-19 vaccine.

DeWine made the major announcement on Tuesday after dropping the age limit to 50 the week prior. Before that, the governor moved more slowly to expand access to the vaccine, which has been limited in supply.

Meanwhile, anyone 40 and older and people with several additional medical conditions will have a shot at booking a vaccine appointment starting this Friday, March 19. The newly eligible medical conditions are cancer, chronic kidney disease, chronic obstructive pulmonary disease, heart disease and obesity.

The latest expansion adds 1.6 million more Ohioans to the list of who is eligible.

“It’s a moral imperative that we move as quickly as we can to vaccinate all Ohioans who wish to be vaccinated,” DeWine wrote in a Twitter post on Tuesday. “We expect a significant increase in vaccines coming to Ohio soon, so we will expand vaccine eligibility.”

Those ages 16 and 17 will receive the Pfizer vaccine, the only one the FDA has permitted for that age group.

So far, one in every five Ohioans has received a vaccine shot, just shy of the national average. That means 2.4 million Ohioans who have received one dose, and 1.4 million are fully vaccinated.

About two-thirds of all Ohioans 70 and older have received at least one vaccine dose, according to state figures.

Last week, the state set another one-day vaccination record on March 11, when 78,347 people received a shot.

The rest of the 15 mass sites across the state will open “in the coming weeks” as more vaccines become available in a partnership with FEMA, it was announced this week.

In other COVID news—

• In-person visitation began at Friends Care Community this week one year after it was halted to slow the spread of the novel coronavirus. The local nursing and assisted living facility was one of only a handful of such facilities in the Miami Valley that emerged from the pandemic with no resident cases of COVID-19. It was the only facility in the county with no cases, and one of only four in Greene, Clark and Montgomery counties to have no cases, out of 111 such facilities. Nearly all residents and the majority of staff were vaccinated in January and February. Nationwide, nursing homes, due to the age of residents and close quarters, became a significant site of viral spread and COVID-19 deaths.

• Friends Care’s new visitation policy comes on the heels of federal guidelines stating that all federally designated facilities should allow responsible indoor visitation at all times for all residents, regardless of vaccination status of the resident or visitor. Exceptions include when a facility is located in a county with a positivity rate of more than 10%, or if less than 70% of residents are vaccinated. For the two-week period ending March 9, Greene County’s positivity rate was 7.5%. Assisted living centers, which are regulated by the state, are also permitted to start indoor visitation, and in-room visitation is also allowed.

• Ohio added 155 cases per 100,000 over the last two weeks, a decline from 186.5 last week. All state health orders will be revoked once the state falls to 50 cases per 100,000 people over a two-week period. DeWine called it “great progress” but added that cases were “still at a highly elevated level.”

• Nine more counties moved from “red” to “orange” on the statewide heat map, bringing the total of counties in orange or yellow to 22. That threshold is largely defined by 100 new cases per 100,000 residents over two weeks. Greene County remains “red” with a figure barely over that threshold at 107.73 per 100,000 for the week ending March 10. If current trends hold, Greene County will likely drop to orange next week for the first time since October 2020.

• This week, the state issued guidance for county fairs. If state health orders are still in effect, masks will be required and grandstand seating will be reduced to 30% of capacity. DeWine said guidance will be issued soon for proms, graduations, parades and festivals.

• Regarding spring sports, DeWine announced that student-athletes will no longer have to be quarantined from playing sports if they were exposed to someone with COVID-19 at school. Previously, DeWine lifted the requirement that students quarantine from school, but it remained in effect when it came to refraining from athletics.

• DeWine announced last week that the state was making rapid tests available to K–12 schools in the state. No local testing plan has been announced at Yellow Springs Schools yet.