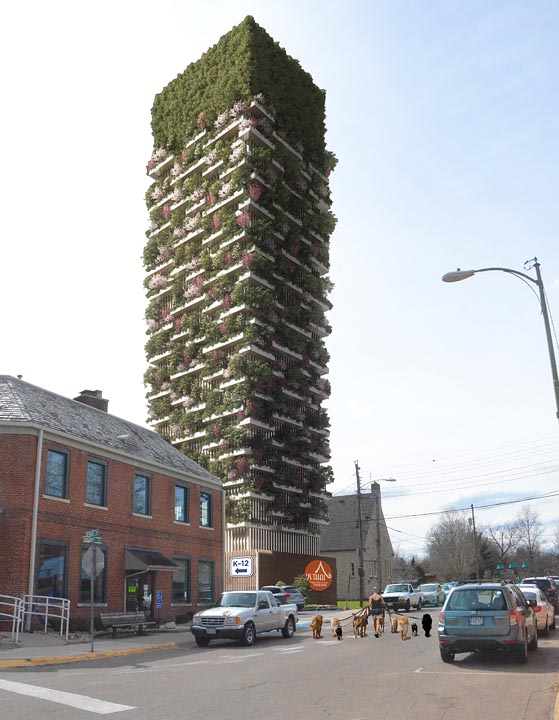 The multi-purpose tower slated for construction on Short Street this summer promises to be the be-all, end-all answer to pretty much every bee in anyone’s bonnet. As of this writing, all names under consideration are way too long for any signage. (Architectural rendering by Intersectional Architects Unlimited)

One size fits all— Building slated for Short St.

At a recent meeting of Planning Commission, Amalgam Development presented the first rendering of its new energy-coherent, hybrid-concept, collective-purpose complex, which the company aims to open by April 1 of 2022.

The new build, planned for Short Street, was originally slated to be a modest block of apartments, but Amalgam changed course after asking for community input.

“And, uh — boy, did Yellow Springs come through!” Amalgam spokesperson Getty R. Dunn told the Snooze after the meeting, pulling at his collar and sweating slightly. “There are a lot of good ideas out there.”

Dunn leaned in close to this reporter, who observed what was perhaps a look of desperation in the spokesperson’s eyes.

The new complex will feature the originally planned apartments, but also a performing arts center, an indoor sports arena, a Thai food restaurant, a medical marijuana dispensary and a dog park. In addition, the entirety of the building’s bottom floor will be a bank of public restrooms.

“We’re hoping this new build will be the fulfillment of a lot of local wishes,” said Dunn. “Or, if not wishes, per se, then certainly a lot of conversations on Facebook and at the YS Brewery.”

“Which reminds me,” Dunn added. “There will also be a brewery.”

The Short Street lot is small, so Amalgam has chosen to build up rather than out in order to conserve space. Even so, Dunn said, the development company was inspired by the space-saving solutions commonly used in tiny homes, like adding lofts and hidden storage.

“So we decided to go ahead and throw a couple of tiny houses in there, too,” Dunn said. “At this point, what’s it going to hurt?”

“There’s even talk of putting a senior housing complex and the schools in there, too,” he said, and turned to walk away.

“Sure,” he added loudly, as though speaking to himself. “Why not?”

At press time, Amalgam had no plans to add additional parking.