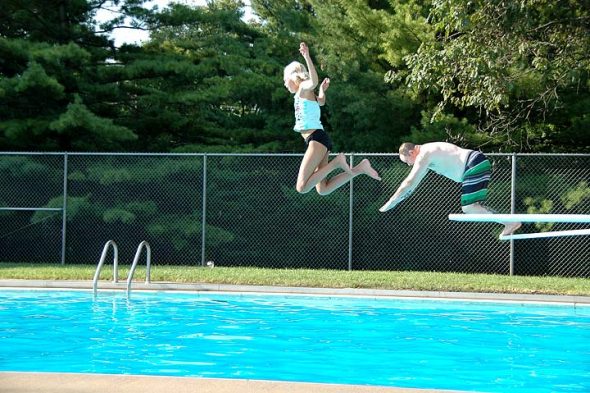 When the Gaunt Park pool opens on May 29, it will look, in many ways, similar to last year. Masks will be required, and the grassy area will be marked to designate socially distanced seating areas.

But there will be some changes. Gone are both the two-hour session limits and locals-only days. And higher prices will be charged across the board in the first pool rate increase since 2009.

Council passed the first reading of an ordinance amending pool rates at its March 15 regular meeting. A second reading and public hearing for the measure is April 5.

The largest cost increases will affect nonresidents. In another change, there are no longer lower rates for Miami Township residents.

The Village originally proposed a rate adjustment for the 2020 season to deal with several years of declining pool revenue, but changed course after the COVID-19 pandemic.

Village Manager Josué Salmerón justified the increase as needed to cover the rising cost of operations at the pool, which typically runs at a loss. Specifically, pool chemicals and staff costs are consistently increasing.

“The rate adjustment … will allow us to increase the revenues, but not at the sacrifice to affordability and access to our community,” Salmerón said.

Last year, the Village decided to reopen the pool in early June, a decision that caused some controversy. Despite a petition signed by some 200 to keep it closed, the Village stayed the course.

This year, most COVID protocols will remain in place, Salmerón asserted.

“We expect to follow all of the COVID guidelines and take the most precautionary approach to opening the pool,” he said.

However, limiting pool attendance based upon whether one was a Yellow Springs resident is not planned for the 2021 season, at least not during weekends, Salmerón said.

“Limiting the weekend, our busiest time, to just one group of people didn’t work for us last year,” he said.

Regarding the price hike, this year’s daily admission fees for both residents and nonresidents are set to rise from $5 to $8.50 for adults and $3.50 to $4 for children. Admission for children 3 and under remains free.

Though Miami Township residents have previously had a special rate lower than other nonresidents, this year they will pay the same fees as nonresidents.

The Village will also continue to offer discounted passes to low-income villagers through its “Swim for All” program, and grandparents will still be permitted to add grandchildren to their pass, according to the ordinance.

Over the last decade, the Village has spent close to half a million dollars to subsidize the pool, the last remaining municipal pool in Greene County. Last year, the Village spent $84,709 to run the pool and took in $24,399 in admissions and other revenues, for a loss of $60,311, according to figures shared by Salmerón with the News. That was after about $13,432 in pool attendant wages were reimbursed with federal relief funds through the CARES Act.

• Salmerón said that there is new funding coming available to municipalities in the recently passed $1.9 trillion federal relief bill. The Village expects “a few hundred thousand dollars,” he said. Council will soon discuss ways to use the funds. Options include replacing revenue losses, infrastructure spending and continuing to fund COVID-19 safety measures.

• Council President Brian Housh said the Village is looking to do a COVID-19 precautionary “downtown signage refresh,” with more signage for the heavy traffic areas, including more “Be Kind” mask signs.

• Council discussed but ultimately denied a request from KellyAnn Tracy, of a new local organization called Holding Space, to give a donation for a planned Community Easter Egg Hunt on Saturday, April 3. Some of the opposition came due to the concern that the government would be funding what might be seen as a religious event, while others wanted a request for funds to be vetted through a commission first.

• Salmerón announced that the administration is excited to “take a deeper role” with regard to neighborhood gardens. He said the Village is planning “hearing sessions” to listen to the needs of local community gardeners. Started by villager Doug “Thor” Bailey in 2010, the gardens allow local gardeners the opportunity to tend plots on Village-owned land in various locations throughout town.

• Council member Laura Curliss gave an update on decriminalizing minor misdemeanors in the village. Curliss reported that YS Police Chief Brian Carlson has already directed officers not to stop drivers for such issues as loud music or exhaust noise, or for such mechanical failures as a broken taillight, as a primary reason for the stop. YSPD will begin keeping statistics on such stops on April 1. Carlson called it a “great start, a great plan.” Curliss said moving violations will be the next area of focus.

• On a related issue, Council member Lisa Kreeger said progress has been made in drafting a plan for a Citizen Review Board to handle complaints against police officers. The matter is currently being considered by a Justice System Collaborative Committee subgroup. Housh emphasized that work to reform local policing has been going on since at least 2015, with the development of guidelines for Village policing.

• Salmerón gave a presentation on the Village’s potential sale of renewable energy credits in 2021. Last year, the Village’s electricity was 80% renewable, and the credits are worth close to $150,000. The money could be used to fund new solar generation, invest in electric infrastructure, provide energy-saving rebates and incentives and fund the utility round-up program, Salmerón said. Council members briefly discussed whether to sell all of its credits, or sell them and then repurchase other green credits at a lower rate, for a net of around $112,000.

• The Village will host a Virtual Town Hall on Wednesday, April 15, to update the public on the sidewalk project slated to get underway this year, Salmerón said. The sidewalk will run along Limestone Street from Xenia Avenue to Dayton Street and was largely funded  through a Safe Routes to School grant.

• Prior to the meeting, Council met for an executive session for the purpose of discussion of a complaint against a Village official. Present for the session were all five Council members, Salmerón, Village Solicitor Breanne Parcels and Council Clerk Judy Kintner.