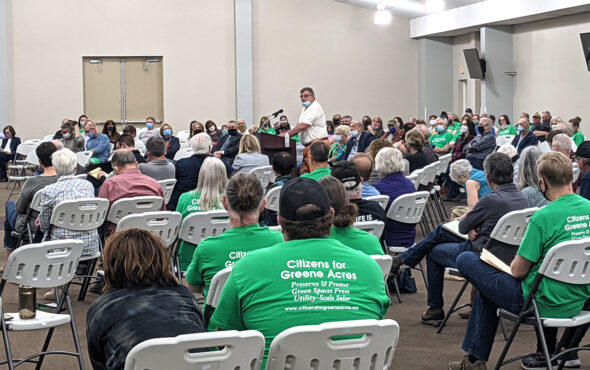 A Texas company looking to build a 1,500-acre, 175-megawatt solar power project in Greene County has applied for a permit.

On Friday, April 16, Vesper Energy of Houston, Tx., submitted its 136-page application, with 1,055 pages of additional figures and appendices, to the Ohio Power Siting Board, a state office with the authority to approve or deny the project.

Since 2017, the company, once part of the Australian-owned Lendlease, has been seeking leases and preparing studies in the project area, located just southeast of Yellow Springs in portions of Miami Township, Xenia Township and Cedarville Township. The company now has 43-year leases on close to 1,300 acres from 17 landowners.

According to the company’s application, Vesper would spend between $144 and $171 million to build the local project, known as Kingwood Solar. Construction could start as soon as summer 2022, with green energy produced around the fall of 2023. They plan to erect 410,000 solar photovoltaic panels over 1,200 acres, along with a substation, utility switchyard and other infrastructure.

Once the Ohio Power Siting Board, or OPSB, accepts the company’s application, a 60- to 90-day period of application review begins, culminating with a public hearing and an official adjudicatory hearing. Vesper has already applied for the public hearing to be held virtually, and expects it to take place in late summer or early fall.

But some are hoping that the project is not built at all. One such group, Citizens for Greene Acres, consists of neighbors and other area residents who suggest the project would change the area’s agricultural character, with potential negative impacts to wildlife, water runoff, and property values. There are 159 residences within 1,500 feet of the project, according to the application.

Citizens for Greene Acres has hired an attorney and applied for what’s known as “intervenor status” to testify to the OPSB as part of the process.

Other groups who are intervening are Miami Township, the Greene County Commissioners and the Tecumseh Land Trust. Yellow Springs Village Council decided not to intervene after advice from the local solicitor that the Village lacked standing to do so.

In other recent developments, more than 200 people attended a town hall organized by the Greene County Commissioners on Tuesday, April 6.

Most of the approximately 40 people who spoke — including several with ties to Yellow Springs — expressed opposition to the project. Present were a slew of local elected officials, including the commissioners, the county prosecutor and sheriff and trustees from Miami and Xenia townships. 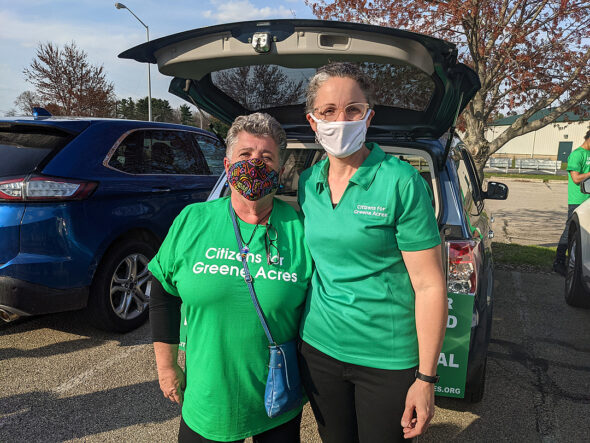 Karyn Stillwell-Current, left, and Nicole Marvin were among the many participants in a county town hall earlier this month to wear ”Citizens for Greene Acres“ shirts. Both are area residents and spoke in opposition to the project, citing concerns about wildlife, property values and economic impacts. (Photo by Megan Bachman)

Greene County Commissioners organized the April 6 town hall in order to hear from residents about the solar development. The elected officials did not speak themselves or respond to the comments. The event was held in person at the Greene County Fairgrounds’ Assembly Hall.

Many in attendance wore green Citizens for Greene Acres T-shirts with the message, “preserve & protect green spaces from utility-scale solar.”

Bob Huston, a lifelong resident of Miami Township, criticized the siting of an industrial project in an agricultural area.

“I think that the proposed solar project of an industrial nature is far outside the reach of an agricultural district,” he said.

Shep Anderson, owner of Yellow Springs Hardware, who lives on Tobias Road, was critical of the company’s limited experience in large-scale solar projects. Lendlease’s solar energy division was created in 2015, and spun off into a new company last year.

“Fifteen-hundred acres for 30 years. That’s a lot to hand over to an outside corporation,” he said.

Krista Magaw of the Tecumseh Land Trust said the nonprofit has applied to be an intervener. The issue was important to the nonprofit because of its role in protecting farmland and prime soils and strengthening the agricultural economy at the state and local level, she said.

Susan Jennings, of local nonprofit Community Solutions/Agraria, shared her concerns about the loss of prime agricultural soils, wondering if the land would ever be returned to farming in light of evidence that most solar sites become brownfields.

“We need to think about how to support our farmers so they don’t turn to solar and turn it into an industrial site,” she said.

Bill McCuddy, who lives on Wilberforce-Clifton Road, aired his worries about how the project might affect the aquifer recharge rate, as many area residents rely on private wells.

Karyn Stillwell-Current, owner of Current Cuisine and a Bradfute Road resident, said she is concerned about the project’s impact on wildlife migration and property values, and wondered about potential storm damage.

“We are in tornado alley,” she said. “Who is going to clean that up, when that company sells to another company?”

Terry Fife, who lives on Clark Run Road, said she doesn’t think the OPSB will consider the project’s impact on the “heart and soul of the neighborhood.” She believes the project only benefits a small number of leaseholders and a private developer, to the detriment of the rest of the area’s residents.

“The Clark Run and Massie’s Creek neighborhoods will be radically transformed, not just for 43 years, but forever,” Fife said.

But not all who spoke were opposed.

Scott Fife, who lives in Yellow Springs and owns property in the area, shared that farming is “incredibly difficult,” while the economic benefits of the solar farm are “nothing to be sneezed at.” He said he found it ironic that the same property owners who sold off land for residential development now oppose the solar farm, which is a partial solution for climate change.

“If we are concerned about global climate change, is there not a value to doing the right thing?” Fife said. “Seems to me a little bit of ‘not in my backyard.’”

Another Yellow Springer speaking in favor of the project was Wilford Simon. Simon said it would benefit the land for it to “lie fallow” under the panels for 30 to 40 years, and argued that solar is the “wave of the future.”

“As far as being an eyesore, it’s not cows and corn … it’s just different,” he added.

Others who spoke in support included Jane Sweet, one of the leaseholders, who said the project would lead to fewer pesticides and fertilizers being applied and more pollinator habitats, and another woman who said if the company planted native plants for pollinators it could be a “win-win” for clean energy and ecological health. A speaker who introduced themselves as a member of the International Brotherhood of Electrical Workers emphasized the possible education and apprenticeship opportunities at the site.

Other speakers raised questions about the reduction of property values, the proliferation of weeds at the site, the environmental impacts of recycling the panels, the negative impact on state historic sites and nature preserves, the harm to bees and birds, the likelihood of the land’s return to farming, the project’s electricity being sold out of the area and the decision being made by the OPSB in Columbus, instead of locally.

Reached for comment this week, Dylan Stickney of Vesper Energy addressed some of the concerns raised at the meeting, and other aspects of the application.

“I’ll be the point of contact in helping to push things along, engaging with the OPSB staff and county officials and talking with community members,” he said of his role.

Stickney, who is based in Boston, Mass., said he has been working in the energy and utilities industry since 2014 and has managed other solar developments, including in Ohio. He visited the area for the first time to attend the April 6 town hall.

In response to concerns that the project’s leadership has changed numerous times since its inception in 2017, Stickney said that there has been the “same executive leadership team” overseeing the project from the beginning. Lendlease’s solar energy arm was spun off into Vesper Energy last year, with funding coming from private equity.

“Our team has held on to this project since the beginning. It’s a great project, it has tremendous value, not just for us, for everyone,” Stickney said.

However, ownership changes are likely in the project’s future, he said, which is typical for the energy sector. Kingwood is actually its own LLC, he added.

“It’s really common for projects in this industry — renewables and just power generation in general — for projects to be bought and sold,” he said.

Asked whether he has managed energy developments that have faced organized opposition similar to Citizens for Greene Acres, Stickney said he had not, but that other opposition groups have formed in response to solar projects in the state.

Stickney said he tries to answer community member’s questions, but that it is unlikely everyone will ultimately support the development.

“I will say it is rare to have 100% of community members embrace and support a project of this size,” Stickney said, “whether it’s a subdivision or a shopping mall … anything that is new, that is going to change anything in a community.”

Stickney said the company tries to address major concerns, specifically with regard to protecting neighbor views by planting vegetative screening.

“We’ve taken a very aggressive stance to protecting the viewshed,” he said.

Stickney confirmed that the company would still move ahead with the project, even without its preferred PILOT tax abatement. He said the project wouldn’t necessarily incentivize other solar projects in the county, although it might spur other projects in the state. He argued that company research has shown that property values do not decline adjacent to solar projects. And in contrast to numerous statements at the meeting, the proposed project is not “industrial,” he said.

“I understand that it’s not a field of crops or a pasture. What it is, is a low-impact way to create income on private land,” he said. “It might be different but we hope it can be a quiet neighbor.”

“We hope to do our part in this community to introduce a clean energy economy, both at the local and the state level,” he added.

Other aspects of the application and specific concerns from neighbors about its contents will be covered in a future article.