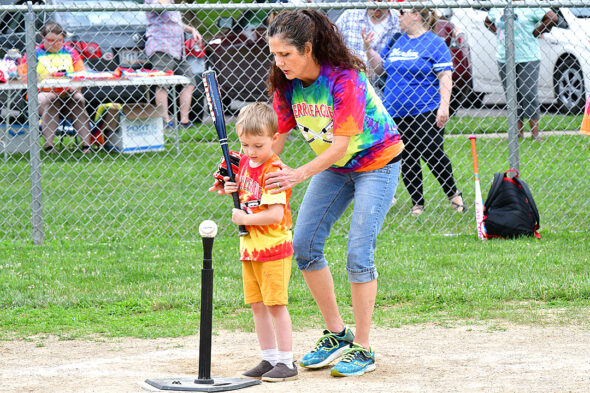 Love and energy at Perry League

They just show up: children you’ve known, children you’ve loved, children you want to see again. Like Ella Bistline, 5, and her twin brother, Parker. Ella looks at you with love and an expectation of the same in return — and by golly she gets just that, all of my T-ball love. Their big brother Brody, 8, has come to work, to run the show. He swings in front of me, making sure I know he’s here, and then he goes directly to the growing line of children on the first base line where they join David Draper, 3-year-old George’s father. David and a dozen children will throw balls out to the kids in the field after the batter hits her ball off the tee.

George is so cute it makes my face hurt.

“He just turned 3,” says his grandfather Rob Gay, our lead infield volunteer who has stationed himself at the pitcher’s mound. Later, when George comes to bat for his fourth or fifth time, Rob has us freeze at the tee as he kneels in the dirt of the diamond to snap George’s picture on his cellphone.

I got the Deal part — he is one of Jennifer Deal’s kids.

“Shiloh,” Jennifer tells me when I see her taking his picture. Ah, yes, thank you.

Evelyn Schmidt, 5, has a serious, studious demeanor. She’s like a staid businessman you’d see in a 1950s movie. She holds her bat carefully and swings it thoughtfully. It thrills me to see this unique child making her unique approach to hitting the ball. Which she does quite swiftly — only two swings needed — hitting it quite soundly.

Elijah Schaffnit, 5, beautiful in a deep forest green T-shirt, is another young professional, like Evelyn. He is very attentive, following every ball coming his way — this is another careful young fellow — and scoops them up quite easily using his glove to do so, which is quite a feat in this T-ball game. Those beautiful, 100% genuine cowhide leather gloves are gigantic and unwieldy. Scooping up a ground ball with such a glove is a little like trying to pick up a ping-pong ball with a full-sized pillow. Then, as often as not — and this is one of the marvelous, miraculous things about our T-ball kids — Elijah gives the ball he’s just scooped up to the empty-handed, and slightly heartbroken child standing next him. Elijah is generous, thinking of and caring about others. And he’s only 5. It is too wonderful.

Louise Camard, 9, tells me she is going to work, not play in the field as she had done in the past. She is going to help me and Margi Gay at home plate.

“Oh, OK,” I say, surprised, delighted. She gathers balls and hands them to me or puts them on the tee, then tells kids what to do after they hit the ball.

“Put your bat down, put it down, then run to first,” she says, pointing to first base, often taking the little ones by the hand, leading them to first. And she does this with every kid and turns out to be a delightful companion to boot.

Her little sister Julia, 7, is all about fielding and catching and throwing balls. She’s in the infield most of the evening, only coming in to bat in the last 10 minutes of our T-ball time. She is especially animated, unusually enthusiastic and excited, and seems to be brimming over with some ineffable confidence and joy — it’s like she is an actor on stage who knows she is as good, if not better, than anyone sharing the stage with her. It is thrilling to witness. It’s not conceit. It’s not showing off. It’s simply the most unadulterated joy of a 7-year-old girl loving herself and everything she could do.

Rocket Cowperthwaite, 9, is back being very cool, as he always was, being wildly athletic, and being proud and protective of his little sister, Imogene, 4, who though shier than Rocket, more sedate than he, is another naturally gifted Cowperthwaite.

Laurelai Myers, 5, told me: “I did a lot of things tonight.” We were on the first base line where she was throwing balls out to kids in the field.

I am impressed by her thinking about her activity, evaluating it, appreciating it. Then she says she was confused about where all these balls were coming from. Oh? Then she explains to me where they came from, clarifying her own confusion. It is Rob Gay throwing the balls at them, she said. He has all the balls, and he throws them three at a time, which thrills and baffles and animates us all.

Dahlia Espinosa, 7, with her long beautiful tresses falling well below her shoulders, her dark eyes shining, is a stand-out beauty on this field of dozens of beautiful children — and she is an easily competent hitter and runner. It’s as if she’s been playing T-ball all her life.

Rowan Arthur, 8, is an athlete par excellence. He runs well, he runs fast, catches 50–60 grounders, throws the ball like a much older kid and is quite handsome to boot. I tell him this and he says, “Yeah,” that he is going to grow up like me.

He nods — yes — and we both have a nice little laugh.

And you might have a nice little laugh, too, and maybe a bit of fun, a few moments of joy, should you join us this coming Friday, July 16, at Gaunt Park, from 6:30 to 8 p.m. These kids and their families are terrific people full of love and energy, goodness and grace — so why don’t you treat yourself? Come on out. We’d love to have you.

One Response to “Love and energy at Perry League”