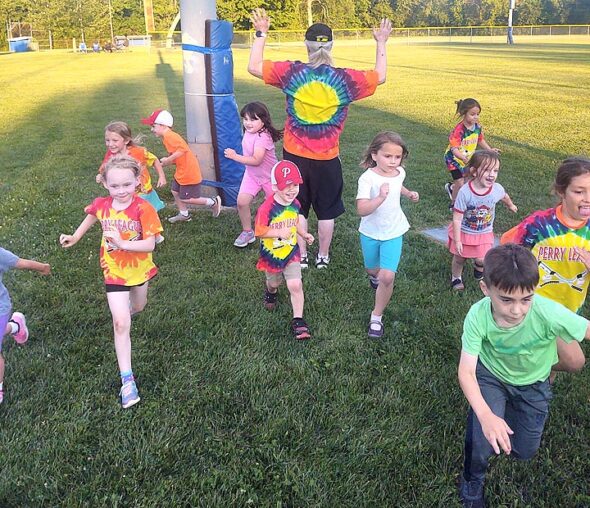 Tie-dyed T-shirts and joyfully shrieking kids can only mean one thing: Perry League T-ball, with Coach Jimmy, is back again after a year’s absence. Above, as pre-game warm-ups concluded, Perry Leaguers rushed to the diamond on Coach Jimmy’s signal on July 2. T-ball continues every Friday at Gaunt Park from 6:30 to 8 p.m. through the summer until Labor Day weekend. (Submitted photo by Chris Triplett)

Perry League — Bright-eyed and back at the tee

After a 24-month lay-off — our entire 2020 season was canceled because of the coronavirus — Perry League was back in glorious, uproarious action last week. We were thrilled by the turnout: 42 kids showed up — those we managed to officially count, by getting their names, ages, parents’ names. Bright-eyed, enthusiastic, eager to play. Even a bit impatient: we were doing our traditional warm-up exercise in the right field at the beginning of the evening. We did arm rolling and toe touches when the handsome, athletic — with his own new glove — Owen Botkin, 5, called out, “When do we play ball?”

Fiona Garcia, 6, with a phenomenal explosion of ebony hair, was quick to hit and quicker getting to first base. Amandine Bouquet Saber, 7, is so smart, her beautiful brown eyes penetrating you — you can see how thoughtful she is by how closely and carefully she watched you and everything around her.

Simon Devine, 4, was introduced to me by his grandmother, Callie Cary.

“You see that?” Cary said as Simon turned to look up at us. I was delighted and stunned: Simon looked like a 4-year-old angelic version of his late grandfather, Bob Devine.

Thomas Stratton, 8, again displayed his wonderfully impressive athletic ability — he comes to the plate with the ease and confidence of a pro like the Red’s Joey Votto. Two boys, Evan Botkin, 9, and Sebastian Valdez-Malishenko, 9, volunteered to assist me and Margie Gay helping kids at the plate; we show them how to hold the bat, how to swing, where to stand in relation to the tee, what to do after they hit the ball, etc. Evan showed Thomas where the sweet spot was on his bat and then Thomas took one of his measured, perfectly timed power swings and sent the ball sailing over everyone’s head.

Violet Ficke, 4, and her little sister Amber, 3, came to bat carrying baseball bats that were longer than they were tall. Violet swung hard and fast, missing the ball completely two, three times, connecting on her fourth mighty swing, sending the ball skittering to and through the legs and feet of kids in the infield. Amber was brave, swinging a bat seemingly heavy enough to swing her, but she persisted — these T-ball kids are determined, not easily discouraged — and Amber pushed on and hit a nice grounder. As she raced to first, her dad, Kyle Vicke, filmed her as he had done with her older sister, Violet. After Kyle filmed them a couple times, he pocketed his phone and then, from where he stood along the first base line, he threw balls out to the kids in the infield.

Sarah Fink, one of my favorite human beings, was back for her fourth season as a Perry League champion. Sarah is one of those kids who quietly goes about their business — and with Sarah it’s the business of being a superior athlete — hitting, fielding, running, helping others, this year with an extra touch of beauty, wearing a long, lovely tail of hair that reached straight down her back to her waist.

We had a couple of Ronans — Ronan Triplett, 3, who came with his sister Zaria, 7, swung the bat so hard he spun himself around and down to the ground. And without batting an eye, he stood back up and smashed the next ball right into the wonderful mass of children standing near and around the pitcher’s mound. The other Ronan was Ronan Byrne, 7, a sophisticated T-ball player. Like many of the older kids — the league is open to kids 2–9 years of age, with an occasional 10-year-old slipped in — his hitting, running and fielding were quite accomplished, always a thrill to witness, giving me faith and hope for our often-troubled species.

Our youngest players — one of Perry League’s unique features, having kids so young — Tatum Drew, 2, Ash Husk, 3½, Martin Burns, 3, Emberlee Deal, 2, River Brevik, 2, Willa Ewalt, 3, Thea Schmidt, 3, Jack Snyder, 2, Josie Boyer, 3, and Mia Stratton, 3, confirm my belief that this T-ball business is perfect for such young participants. They run, they cavort, they cluster up, they play ball, and they race to and about the long grasses of our outfields. And they run with us in our final race to the light pole in right field at the end of the evening, where I ask the assembled gang, “Did you have fun tonight?”

And then I ask, “Are you coming back next week?”

And so, I hope, do all of you, our T-ball friends and supporters. We will be out there at Gaunt Park, next Friday, July 9, from 6:30 to 8 p.m. These kids and their families are aces, one and all. So do yourself a favor, come on out and enjoy the show. We’d love to see you, blankets, chairs, drinks and snacks in hand.