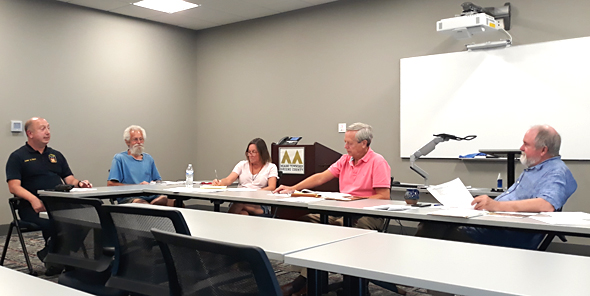 At both of its July meetings, Miami Township Trustees Chris Mucher and Don Hollister discussed the possible use of nearly $130,000 in federal funds coming to the township through President Biden’s American Rescue Plan, or ARP.

The township’s ARP funds are to be distributed in two installments of about $65,000 over the next two years. Previous pandemic-related funding, which was distributed through the CARES Act, legislated during the Trump administration, went to fire-and-rescue personnel costs tied to the department’s pandemic response.

The meetings took place on Wednesday, July 7, and Monday, July 19. Trustee Mark Crockett was absent July 7 and did not have a comment during the Rescue Plan conversation on July 19.

Hollister said that he would like to consider a broader use of the new funds, but he didn’t have a specific idea to recommend.

“I want to look at what other townships are doing, what the Village is doing,” he said July 7.

At the second July meeting, the trustees had more clarity on how the funds can be used. They noted that ARP funds can go toward economic development and infrastructure, including water, sewers, roads and broadband.

Hollister suggested the township collaborate with the Village in hosting a public meeting to get community feedback.

“It makes sense to solicit ideas,” he said.

Mucher, however, said he was reluctant to host a meeting without “knowing what we’re talking about.”

They agreed to talk more about the matter at their next meeting, Monday, Aug. 2.

“I will have a written proposal [for a public meeting] or I will drop it,” Hollister said.

In other Township business at its July meetings:

• Zoning Inspector Richard Zopf reported July 7 that in the prior month he had issued one zoning permit — for the construction of a personal solar array on a Clifton Road property. He also reported that the Zoning Commission had completed its final draft of the zoning code’s chapter on Planned Unit Development, or PUD, and was looking for feedback before a public hearing is held.

“The reason is public safety,” he said about the restriction against private roadways. If the property owner does not maintain it well, then safety services would be hampered, he explained.

• Zopf also reported on the June 30 hearing by the Board of Zoning Appeals, or BZA, on two requests related to proposed activities at the Agraria farm property. The BZA upheld Zopf’s original decision that Agraria can not rent out its historic barn for weddings and other community events, and it modified his determination against renting the office conference room to other groups, ruling that Agraria could rent it a maximum of 12 times a year.

Zopf said that BZA Chairman Richard Silliman and Stephen Haller, of the Greene County Prosecutor’s Office, which serves as the township’s counsel, are preparing a resolution statement to release publicly about the BZA’s conclusions.

Noting that the BZA has had several high profile hearings with large turnout over the past year, as opposed to some years where no hearing is requested, Zopf said he anticipates that questions about agricultural zoning uses will continue.

“The Board of Zoning Appeals has agreed that they need to have a meeting that isn’t a hearing to discuss how to handle these new kinds of meetings that are coming up,” he said. “We’re working on making this run more smoothly in the future.”

Securing a large enough space with adequate parking is also a consideration for the higher profile hearings, he said.

• On July 7, the trustees and Miami Township Fire-Rescue Chief Colin Altman discussed hosting an open house for the new firehouse, located at Xenia Avenue and East Herman Street. Although the department moved into the station in November 2020, the COVID-19 pandemic prompted an extended delay in celebrating the facility’s opening. The event has been set for Saturday, Aug. 14, 10 a.m. to noon.

• Chief Altman reported that the local annual stair-climb event commemorating the 9/11 terrorist attacks would be held this year — the 20th anniversary of the tragedy — at the University of Dayton Arena. Part of a national initiative, the local stair climb took place in years past at Antioch College’s Main Building.

Altman said that uncertainty about the college’s plans for that building prompted the change in venue. Last year’s event was held virtually because of the pandemic.

• Mucher reported on July 7 that the contractor responsible for stone work on the outside of the new firehouse had agreed to refund $5,000 to the township because of cracks in 18 of the stones.

Mucher said the issue was visual, not structural.

“There is no structural integrity involved in these,” he said.

• On July 7, Marilyn Moir, who has declared her candidacy for Trustee in the November general election, asked the Trustees about the accessibility of Township public records, particularly minutes of the trustee’s meetings and copies of the zoning code. Moir expressed having difficulty finding up-to-date information on the Township’s website. Obsolete sections of the zoning code also became an issue of confusion during the recent Board of Zoning Appeals hearing about the Agraria property.

Fiscal Officer Margaret Silliman said that Moir could call her for whatever documents she wanted and Silliman would retrieve them and bring them to Moir’s house. Moir asked how others should find public documents. Silliman and Mucher both said anyone calling the Township office would get a response.

Mucher announced on July 19 that the copy of the zoning code on the Township website was being updated to reflect the most current information.

The next township trustees meeting is Monday, August 2, at 5 p.m., at the new fire station.

Topics: Miami Township Board of Trustees