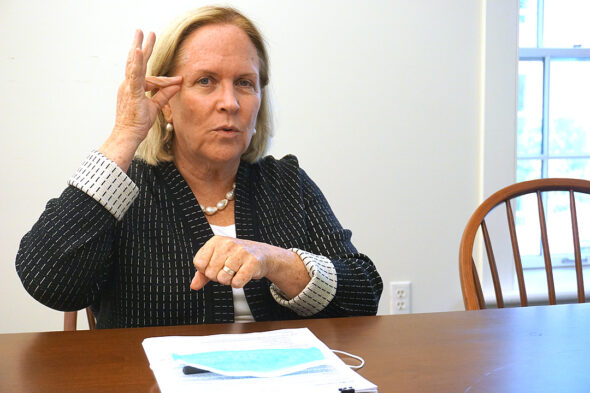 New Antioch College President Jane Fernandes, who is deaf, sat at a small conference table. With an American Sign Language interpreter present to help ease the conversation, she shared some of the life and professional experiences she anticipates will inform her presidency as well as her thoughts on higher education and Antioch’s place as a liberal arts institution. (Photo by Carol Simmons)

Jane Fernandes likens her position as the new president of Antioch College to that of an orchestra conductor, with the school’s faculty, administrators and staff filling the musicians’ chairs.

“All the musicians know their music. They know their instrument. They’re practicing at home. But I’ve got to get them together and learn how to play with each other,” Fernandes said during a recent interview on campus.

Amid floral bouquets of welcome decorating her new fourth-floor office in the college’s South Hall, Fernandes continued the orchestra analogy.

“There’s a trust relationship between the conductor and the musicians,” she said, identifying trust as a cornerstone of an orchestra’s success. Similarly, building and sustaining a trust-based relationship on the Antioch campus is among her goals as the institution’s new head, she said.

“The audience is important, too,” she added, referring to the surrounding community. The well-being of an orchestra — or college — requires a partnership with the community, she said.

“Without the audience, we wouldn’t be able to play.”

Fernandes, who is deaf, sat at a small conference table. With an American Sign Language interpreter present to help ease the conversation, she shared some of the life and professional experiences she anticipates will inform her presidency as well as her thoughts on higher education and Antioch’s place as a liberal arts institution.

On the job since mid-August, Fernandes is the college’s second female president since its founding in 1850 and its third president since reopening in 2011 after a three-year closure. She comes to Antioch after seven years as president of Guilford College, a Quaker-affiliated school in Greenesboro, N.C., where her placement as top administrator made her the first deaf woman to lead an American college or university.

“The transition’s going well,” Fernandes said of her first week. “I’m thankful for all the work of the community in welcoming me.”

She said she had spent much of her first days on campus getting acclimated and meeting faculty, staff and students.

This weekend will offer a chance for local residents to meet her also, when the college hosts a town-gown ice cream social Sunday, Sept. 26, 1:30–3 p.m. on the Antioch Horseshoe.

Fernandes, 65, said Antioch and Yellow Springs feel like a good fit for her personally and professionally. The college’s history of social justice action was a particular draw, she said.

A native of Worcester, Mass., Fernandes was raised by her deaf mother and hearing father to navigate the hearing world without accommodations. She attended public schools, where she learned to read, write and speak English, and she didn’t begin to study American Sign Language until she was in graduate school.

Her learning experiences as an undergraduate at Trinity College in Hartford, Conn., and subsequently as a graduate student at the University of Iowa, as well as the guidance of mentors at both institutions, served as inspiration for pursuing a career in academia, she said.

“I have a commitment that no student is so limited by their circumstances that they don’t have access to all the support and encouragement possible,” she said. She found that kind of support through a handful of individuals whose impact was life-changing.

“My advisor at Trinity was the first person to sit down and ask who I am and who I wanted to be,” she said. “That was an amazing relationship that propelled me to graduate school.”

Also important for her development was coming to the understanding that her deafness was “not something to be overcome,” she said. “That’s what I was. I don’t have to overcome that; I have to help the world around me give me accessibility.”

She learned that the onus of successfully navigating the world wasn’t necessarily hers alone.

“Maybe my environment could have changed to make things easier for me.”

Fernandes said she seeks to apply that mindset to the educational environment of the students with whom she interacts.

Having attained her undergraduate degree in French and comparative languages, she turned her focus in graduate school to American Sign Language.

“Iowa was where I first saw and understood that sign language was a language,” she said.

She learned by immersion, visiting a deaf club in Cedar Rapids, where she also became aware of a rich story-telling tradition within deaf culture.

Exploring that literary world became the subject of her thesis, for which she traveled by Greyhound bus out into the countryside to visit with deaf families and gather their stories.

She said she believes her experience of leaving the classroom to engage in real-world interactions is similar to the kinds of learning experiences fostered at Antioch, which combines an academic course of study with periods of off-campus work.

Fernandes said she sees an Antioch education as three-fold, involving “classroom, experience and action in the world.”

In announcing Fernandes’ hire, the board of trustees said they had assigned the new president two immediate tasks: increase enrollment from the current approximately 200 students to 500, and increase fundraising.

Fernandes said her experiences, especially at Guilford, have shown her that the two goals are tied together. When more students enroll and are excited about their programs, more donors give to keep those programs viable. More funding strengthens programming, which in turn attracts more students.

The challenges facing Antioch are shared by other institutions of higher learning, and one of the biggest is that “fewer and fewer high school students are going to college,” Fernandes said.

At the same time, those who are going represent a more diverse population of students, including a larger number of first-generation students. Fernandes was recognized by Guilford for increasing diversity on that campus and is a founding member of the Presidents’ Alliance on Higher Education and Immigration, where she advocates for a permanent legislative roadmap to citizenship for Dreamers. Meeting the needs of all students is imperative, not only for the future of Antioch, but more importantly for the well-being and success of the students and the ultimate strengthening of the communities in which they choose to live and work, she said.

Fernandes believes firmly in the power of a liberal arts education to create a better world.

But she sees a trend in the U.S. that “challenges the credibility, challenges the validity, of higher education and especially the liberal arts.” That skepticism is unwarranted and detrimental to the country, she said.

“All the issues the world is working to address — disease, poverty, lack of food, racism, gender oppression, the list goes on and on — our response will be strengthened by the liberal arts.”

Graduates, who have had “access to the accumulation of human knowledge” gain the competency “to go out and become change agents,” she said.

But the skepticism can’t be ignored, she continued. “We have to respond to the concerns.”

At Guilford, the school implemented an advising program that, in addition to the traditional work of making sure students took all the classes they needed to complete their majors, also made connections with real-world applications for classwork. Fernandes said students found the additional information helpful, while parents expressed less stress about their children’s future.

Fernandes said that while a variety of life and professional experiences helped bring her to this new chapter at Antioch, one experience in particular helped shape her worldview.

“I was young, maybe 7 or 8, and my mother asked me to go to the drug store. She had a list,” Fernandes recalled. The mother’s instructions were to purchase everything on the list without anyone in the store knowing her daughter was deaf.

“My mother was thrilled. … She was teaching me how to live in the hearing world.”

And Fernandes was happy to have pleased her mother. But as she got older, she began to recognize “the complication of being happy that no one knew who I was.”

“For my mother, her life was better if nobody knew.”

But for Fernandes, hiding a piece of herself — an important piece — didn’t feel right as time went by. She also came to see that many people feel they need to hide something about themselves.

“They try to cover up and not be vulnerable. I’ve learned it’s more important to show vulnerability and not hide who you are.” She wants students to feel their campus is a place they can seek and show their full selves.

In considering Antioch’s future, her basic goal is simple:

“I hope we will grow and thrive while I am here. And after that — forever.”