Many regular subscribers to the News over the last several decades have probably read the work of Diane Chiddister more than just about any other writer — local or otherwise. In her roles as columnist, reporter and editor at the News, Chiddister dedicated hundreds of thousands of words to the rhythms of village life.

This year, Chiddister offers readers a different rhythm in the form of her debut novel, “One More Day,” which was released earlier this month by publisher Boyle & Dalton. An author reading for “One More Day” will be held on Friday, Oct. 29, 7–9 p.m., at the Senior Center.

Chiddister came to the village in 1981 after receiving a graduate degree in writing from the prestigious Iowa Writers’ Workshop. She told the News in a recent interview that her intention, after graduating, was to “live the life of a writer and teach creative writing.” She did so for a couple of years as an adjunct at the University of Dayton, until an ad in the Yellow Springs News seeking a reporter caught her eye in 1983.

“I thought, ‘Ooh, I love the Yellow Springs News — I wonder what that’s like?’” Chiddister said.
Chiddister was hired by then-editor Don Wallis, who told her that five people had interviewed for the job.

“[Wallis] would always say that four of [the applicants] had journalism degrees and one had a creative writing degree — and he took the creative writer,” she said. “And then he taught me what I know about journalism.”

Chiddister worked part-time at the News, off and on, for nearly the next two decades, reporting and writing a regular column, “A Walk in the Village.” Her own creative writing, she said, continued in the form of short stories, her preferred medium at the time; some of her work was published in the Iowa Journal of Literary Studies and The Beloit Fiction Journal.

“There was a period just before my daughter [Hallie] was born when I was writing more stories,” she said.

Laughing, she added: “And, of course, motherhood shot that to hell — just for a couple of years!” 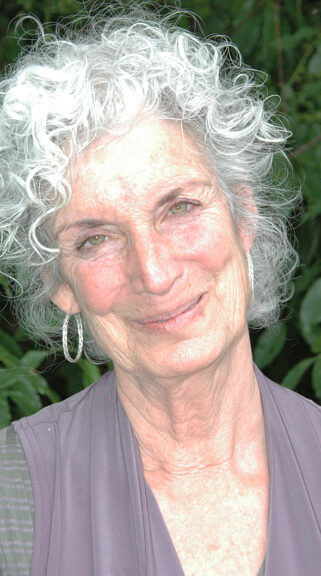 Chiddister acknowledged that, in addition to being a parent, writing for a newspaper also sometimes made it challenging to focus on her own writing, particularly when she became a full-time reporter in 2000 and editor in 2006. But she also pointed out the ways in which writing against a deadline every week, without fail, was a boon to her craft.

“Being a journalist, you can’t be precious [about your writing] — you just have to fill up the page,” she said. “It makes you believe in the process of writing — you just do it. Sometimes it’s good and sometimes it’s not, but you do it and then you make it better.”

Though she had continued to write short stories over the years, she said she hadn’t really considered writing a novel during that time.

She added: “Until I was 68, and suddenly there was time.”

After 12 years as editor of the News, Chiddister retired in 2018. Following years of regular writing, it was a big change, she said — and one she felt she should meet with a challenge.

“I quickly realized I needed a project, something big — and a novel was what came to mind,” she said.

Chiddister decided to try her hand at National Novel Writing Month, or NaNoWriMo, an event held each November since 1999 that challenges writers to produce at least 50,000 words in just 30 days. At the end of the month, NaNoWriMo participants who finish the task have a completed novel in their hands — or, realistically speaking, a rough draft.

“So I went through that process — and it worked in that I got a really, really bad first draft of a novel — but it wasn’t this novel,” she said.

Chiddister’s first draft of a novel was spurred by her experiences during 9/11 — she had been staying in New York City on Sept. 11, 2001. The images from that day were “seared” in her mind, she said — but after the draft was finished, she said she realized she should perhaps aim for “something a little smaller.”

“So I thought, ‘OK, I need another novel — and then I discovered that National Novel Writing Month can be not only any month, but any day,” she said. 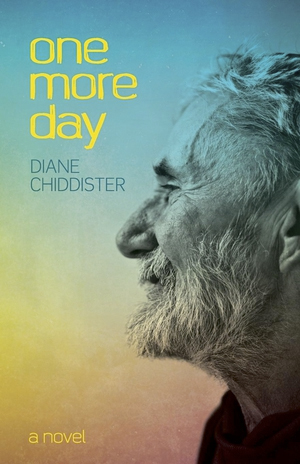 “One More Day,” by Diane Chiddister was published through Boyle & Dalton Publishing.

“Another novel” eventually became “One More Day,” which focuses on the residents and employees of Grace Woods, a long-term care facility, and deals with aging, dementia and death among the particularities of life and work there. Chiddister said the novel came from “a place, emotionally, that was really hard” — she had just experienced the death of a dear friend, villager Mary Donahoe.

“It was sort of like I had to dig myself up out of this hole,” she said. “I think fiction helps you to maybe come to terms with things that are hard, and I felt like I was trying to come to terms with Mary’s death, a little bit.”

The novel’s choice of setting was inspired by Chiddister’s own life: her first job out of college was as an aide in a care facility, and her mother lived at Friends Care Community for a few years. She said that, despite the sometimes negative associations people make with long-term care facilities, they’ve long been of interest to her.

“There’s no denying the heartbreak, and yet they’re fascinating,” she said. “There’s so much love there — to me it kind of buoys everything up.”

Chiddister writes Grace Woods Care Center’s residents and staff to the tempo of their daily patterns: from meals to visits from family, from break room gossip to visits from corporate suits. Crucial to this daily flow is Sally, an aide who Chiddister said was based on one of her mother’s caregivers at Friends Care.

“The aides are really the people who give the most care, and this woman was so full of joy and love and she was just an interesting person,” she said.

Another of the book’s focal characters is Lillian, and the chapters dedicated to her point of view are shaped and colored by the onset of dementia. Though fear and confusion sometimes accompany Lillian’s perspective, there is also room for some wry humor — which Chiddister said was inspired by her mother’s own brush with dementia. Though Lillian isn’t a straight facsimile of her mother, Chiddister said, the character’s experience mirrors her mother’s in that it’s multi-faceted.

“A new side of [my mother] was coming through — dementia opened her up a little bit,” she said. “The heartbreak was there, but it wasn’t only bad.”

Chiddister said this understanding was at the heart of her approach to the book as a whole: A more finely wrought look at aging and death beyond just fear and grief.

“I don’t have an easy view of death, but I wanted to find some moments of grace,” she said.
She pointed to another of the novel’s main characters, Thomas, a curious and intelligent resident of Grace Woods in his 80s who meditates on his life and inevitable death. Writing Thomas, she said, has helped her understand that aging is a time of emotional richness.

“There is so much of everything — more of loss and sadness, yes, but also surprise and joy and forgiveness, and more,” she said. “It’s just such a rich and intense time of life. Thomas … is feeling this, and it’s something I hope to convey.”

An author’s reading of “One More Day” will be held Friday, Oct. 29, beginning at 7 p.m., in the Senior Center great room, with discussion to follow the reading. The novel is available at Epic Books and Dark Star Books and Comics in Yellow Springs.