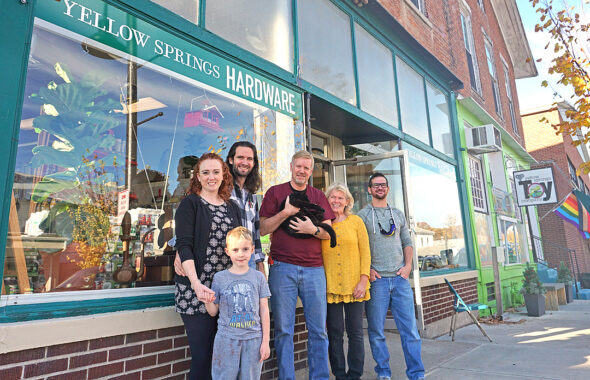 As the landscape of small-town Ohio continues to evolve with the ever-shifting trends of commerce, Yellow Springs has had the good fortune to retain its own downtown hardware store for close to a century. Whether villagers know it as Deaton’s, Downing’s or by its current moniker, Yellow Springs Hardware, it continues — at the corner of Xenia Avenue and Short Street — to keep customers outfitted with building materials, bathroom fixtures and birdseed, among other things.

This year, Yellow Springs Hardware will change hands for only the fourth time in its 94-year history: Shep Anderson and Gilah Pomeranz, who purchased the store from the Downing family in 2017, announced last month in a letter in the News’ Community Forum section that longtime villager Dan Badger has taken the reins as its new owner.

“We’ve really enjoyed our time here, and really, it’s been an honor to be part of the Yellow Springs hardware history,” Anderson told the News in a recent interview.

Pomeranz and Anderson cited several reasons for their decision to pass the torch to Badger: the opening of mega-store Menards on Y.S.-Fairfield Road, just eight miles away, as well as the continued threat of online retailer Amazon to small businesses, were considerations. Add to these the ongoing pandemic, Anderson said, and it became clear to the pair that a shift was imminent.

“All of that really changed the game for us, and we knew that, for this store to be successful, it had to change — it had to be reinvented,” he said. “And we knew that probably wasn’t going to be us.”
Pomeranz said the two of them took a long weekend away from the store to discuss its future — during which, discussions included talk of closing the store altogether. By the time Pomeranz and Anderson returned from their weekend away, however, Badger had contacted them about his interest in the store.

Badger said his decision to buy the store — like Anderson and Pomeranz’s decision to sell it — was based partially on the pandemic. Like many, because of the pandemic, he spent more time at home with his wife, Sarah Badger, and his son, David.

“We realized how much we enjoyed and appreciated that time together, and it made me think about ways to continue that after COVID,” Badger said, citing the store’s proximity to Mills Lawn, where David is a first grader.

Badger previously worked in antique car restoration, and most recently cared for the collection at America’s Packard Museum in Dayton. After his wife moved into a new job with health benefits, Badger said he was “freed up to consider a lot of possibilities.” He said he wanted to work toward re-engaging with and strengthening the community of Yellow Springs.

“I thought, ‘What would bring me the most joy and bring the community the best use of me?’” Badger said. “When you lay out those parameters as your starting point, you whittle down the options to a very short list, and the hardware store was sort of a natural fit — it’s really a foundational element of a small town.”

Badger has long been an element of this small town himself; he was born in Cleveland Heights, but moved to The Vale when he was very young after his parents, Jim and Christiane, read about the intentional community just south of town in a magazine article. His own family now lives in The Vale in his childhood home.

Badger said his work with maintaining and repairing antique cars was spurred by his youth in the village. As a Cub Scout, he and his fellow den members were given rides in an antique airplane by villager Jim Hammond.

“And I just started showing up over at his place constantly after that,” Badgers said. “He taught me how to build model airplanes and fly airplanes and restore airplanes.”

Badger worked for Hammond for about a decade after graduating from high school, which not only prepared him for the particulars of antique restoration, but taught him how to develop a workflow for problem solving. He said this foundational learning, attained in his youth, is part of what fuels his resolve for the continued life and success of Yellow Springs Hardware.

“I have a lot of passion for making sure that we aren’t raising a generation that doesn’t know how to do things,” he said. “This seems like the best anchor point to get involved in doing that work and creating those opportunities.”

To that end, Badger’s own young son can occasionally be seen helping out at the store; Pomeranz and Anderson, who are staying on at the store for a time to help with the transition, said young David Badger is already something of a customer service whiz.

“Just the other day, he showed someone where the sandpaper was, and after they got it, he asked, ‘Do you need anything else?’” Anderson said. “Which is something you often need to train people to do, and he just did it naturally.”

Aside from young David, Badger’s father, now retired from academic advising at Sinclair College, is going to help out at the store. He’ll join employees Tammy Duncan and David Cowan, who are staying on at Yellow Springs Hardware after being hired by Anderson and Pomeranz. Also remaining on staff will be Wilbur, the store’s resident feline and occasional front window decoration.

Upstairs in the office at Yellow Springs Hardware, Badger keeps a collection of books against one wall. Among the tomes are a Valspar paint catalogue and books on inventions and aircraft, right up against works that consider social psychology and racism. Anderson said this broad interest is part of the reason he and Pomeranz believe Badger is the right person to carry on the mission of a community hardware store.

“We knew that if someone were to keep the store at status quo, it wouldn’t work, and spending time with [Badger] — getting to know his vision for the store, his passion for Yellow Springs and his skill set — he’s the perfect combination,” Anderson said.

Also among Badger’s interests is the history of the hardware store itself; he said he’s delved into News articles and other archives to shore up his knowledge on the subject.

“This business was first Anderson Hardware,” he said, pointing out the synchronicity of two former owners named Anderson.

“Anderson Hardware existed in the space that AC service now occupies, and Glenn Deaton … bought that business from the Andersons in 1927 and moved it into this space,” he said.
Badger said his knowledge of the hardware store’s history has informed his approach to moving forward with his vision for the store — namely, to remain flexible and to listen to the community.

“If you look back through old photographs of this store over time, every few years it had to reinvent itself to remain relevant and to meet the needs of the community,” he said.

Badger said one way he’s responding to those needs is by exploring the possibility of offering home delivery. For example, he said, one of the store’s biggest sellers is birdseed, and many of the store’s customers are not only older but often travel there by walking.

“To expect an 80-year-old to find a way to get a 50-pound bag of birdseed back to her home is illogical,” he said.

“I already have a well-equipped shop with a mill and a lathe and a welder — all of the tooling required to build and maintain and restore most things,” he said. “Making those capabilities available to the community seems worthwhile.”

Pomeranz added: “And that’s the stuff you’re not going to get at Menards.”