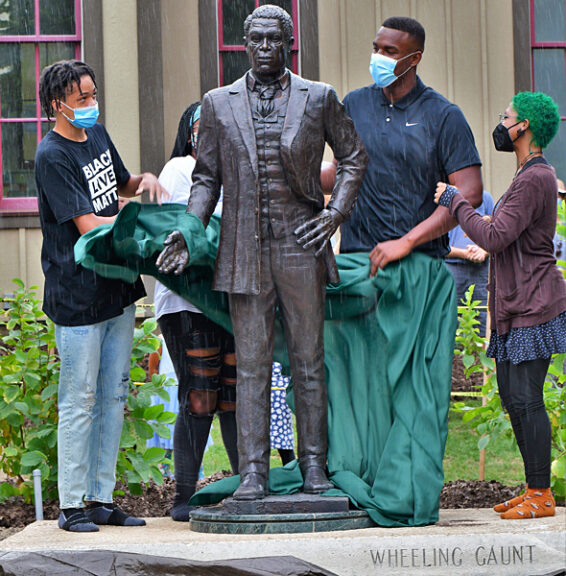 Villagers kicked off the new year differently as they moved into 2021; with the annual ball drop canceled due to the ongoing pandemic and a state-mandated 10 p.m. curfew, Dayton and Short streets were empty. However, folks still found ways to celebrate: with hoverboards, online karaoke and by dropping gourds from roofs, among other activities. Resident annual ball-dropper Lance Rudegeair made sure the local tradition continued, this time dropping the light-covered disco ball in his own front yard.

Several local writers, filmmakers and artists were profiled by the News over the course of the year: artists Anna Mullin and Seth Ratliff were recognized for their illustration and wood and steel work, respectively. Writers Gabby Loomis-Amrhein, Brenda Jean Hubbard, Diane Chiddister, Rebecca Kuder and Robert Freeman Wexler all released new books in 2021, and Catherine Roma and Dawn Knickerbocker were featured writers in a pandemic-themed collection. A new album and film were debuted by arts collective Toadstool Shadow.

Local playwright Bomani Moyenda debuted a new play, “What’s Done in the Dark.” The play, which centered on racism and police violence as its themes, was directed by John Fleming, with video production by Elias Kelley.

The 10-Minute Play Festival returned for outdoor performances in June.

Theater in the schools continued with “Please Stand By” in May, “Talking With…” in September and “The Stinky Cheese Man and Other Fairly Stupid Tales” in December. 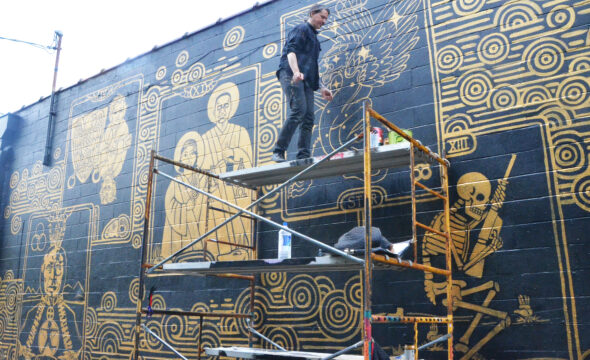 Local muralist Pierre Nagley worked on his tarot-inspired mural on the “free wall” of Kieth’s Alley last month. Lindsay Burke also collaborated on the mural, “The Tarot of America,” which is now complete.(Photo by Megan Bachman)

Muralist Pierre Nagley unveiled a new mural, “The Tarot of America,” in Kieth’s Alley. The mural, which features social justice themes, was in part a response to the vandalism of Nagley’s nearby George Floyd mural in March. Nagley also completed the mural “The People Could Fly,” based on the work of Virginia Hamilton, on the side of the YS News building in early 2021.

The annual Winter Solstice Poetry Reading held its 10th anniversary event in December, gathering online for the second year because of the pandemic.

After four years of planning, the Wheeling Gaunt Sculpture was unveiled in early October. The statue of the 19th-century villager, philanthropist and formerly enslaved man stands in Hilda M. Rahn Park.

The News reported in April that Glen Helen had launched a $3.5 million capital campaign. The local nature preserve reopened in September of 2020 after six months of closure and after being purchased from Antioch College by the Glen Helen Association. The preserve cited increased accessibility as a goal moving forward.

In May, the Glen sought to demolish the Antioch College power plant, which was built in 1929 and used until 2007. When the Glen Helen Association bought the Glen, it also assumed responsibility for the defunct plant, which Glen leadership have determined is an environmental hazard.

In August, the college announced that it had hired Jane E. Fernandes as its new president — the third president to serve since the college’s relaunch in 2010, its second female president and its first deaf president. Fernandes replaced Tom Manley, who stepped down in late 2020, citing health issues.

In October, the Wellness Center reopened to Antioch College students after being closed for more than 18 months, with Trevor Lowe named as its new director.

Yellow Springs native Tracy Phillips, a longtime librarian in the Dayton Metro Library system, returned to the village library as its new head librarian. She replaced Connie Collett, who retired in September 2020, after 31 years.

Caroline Mullin took the helm as executive director for the YS Senior Center in June, replacing Karen Wolford, who retired after eight years.

On July 30, Jimmy Chesire — who had both coached village kids in Perry League T-ball and chronicled its adventures in the pages of the YS News — retired after 35 years at the tee.

Several staff changes were announced at the YS News near the end of the year: Cheryl Durgans was named the new editor of the paper when Megan Bachman left the position after three years.

Jessica Thomas joined the staff as a reporter. Advertising and Office Manager Suzanne Szempruch was replaced by Tim Walker and Lynda Highlander. Szempruch’s ownership shares were bought by Lauren (Chuck) Shows, who joined Durgans and designer Matt Minde as a co-owner.

Krista Magaw retired as executive director of Tecumseh Land trust after 20 years, handing the reins to Michele Burns, who was formerly associate director of the nonprofit.

Bomani Moyenda was the 2021 recipient of the Community Peacemaker Award at the annual Martin Luther King Day event. Moyenda was recognized for his work on behalf of social justice. The award was presented during a virtual program.

In late February, the News was awarded the Osman C. Hooper Newspaper of the Year award in its division for the 11th year in a row at the annual Ohio News Media Awards ceremony.

The Senior Center honored its founder, the late Rev. Wesley Matthews, with an online ceremony and the installation of a plaque on the center’s building in June and July. 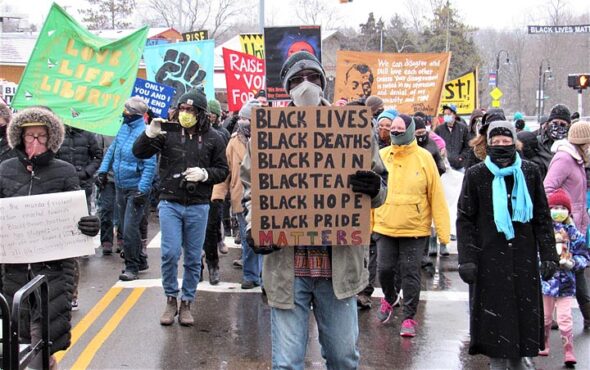 Martin Luther King Jr. Day was celebrated this year, as it always is, with a march through downtown followed by a spirited program. In this pandemic year, however, marchers wore masks, and gathered virtually for the annual program. Above, Cyprian Sajabi shared his message about what really matters. (Photo by Malaya Booth)

Halloween trick-or-treating returned to the village this year after being canceled in 2020, as did the annual downtown holiday tree lighting ceremony.

In and around the village

Rumpke announced in January that it had expanded its recycling program, accepting some #5 plastics.

After nearly four years of effort, Citizens Against Mining, or CAM, celebrated a “significant step” in their battle against mining company Enon Sand and Gravel after the Clark County Common Pleas Court ruled that the company’s mining practices would damage property values and private wells of five nearby neighbors.

The News reported that Dan Robrish, who moved to the village in 2020, had started a local affiliate of the civic club The Rotary in March.

Professional mediator Jay Rothman led a two-part conflict engagement workshop in April and May. Organized by the Village Mediation Program, the free event was held via Zoom.

The 365 Project’s Young People of Color and YS Speaking Up for Justice announced a Reparations Fund in June that had been initiated by seed funds donated by villager Susan Harrison. In 2021, the fund made grants of over $38,000 to several local residents. 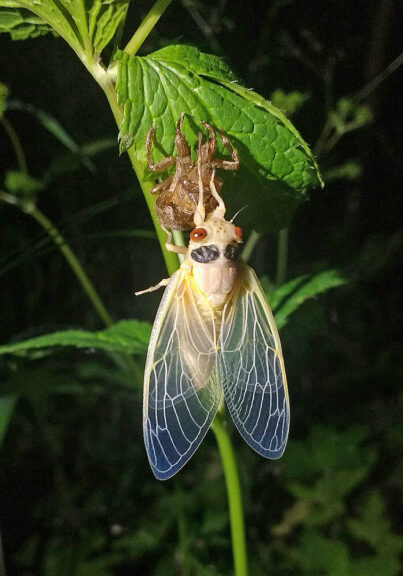 WYSO launched a new series, “Loud as the Rolling Sea,” which profiled Black elders in the village, in July.

In June and August, Inclusive and Resilient Yellow Springs and Home, Inc. hosted the Virtual Cost of Poverty Experience, which was free to villagers through a grant from CareSource.

Clifton Resident Piper Fernwey drafted a Climate Action and Sustainability Plan for the Village of Yellow Springs in August. Fernwey was contracted to draft the plan in July.

Glen Cottages, a pocket neighborhood built by Home, Inc., was completed in August. The neighborhood, which features 12 permanent residences, including six rentals, broke ground in November of 2020.

After Category 4 Hurricane Ida hit Louisiana in late August, the News reported on the story of Vale resident Khara Scott-Bey, who offered housing to a Louisiana family who was displaced. The family had previously done the same for Scott-Bey when she was living in Louisiana.

After more than a year of planning and work, the YS Dog Park in Gaunt Park had its soft opening in early October.

The 365 Project hosted a virtual “Elders Speak” panel in late October, which featured local Black elders speaking on their experiences growing up and living in Yellow Springs and elsewhere.

In late October, a large buck caused quite a scare when he crashed through the front window of Current Cuisine and ran through the store, escaping out the back of the restaurant. The window was restored in early December.