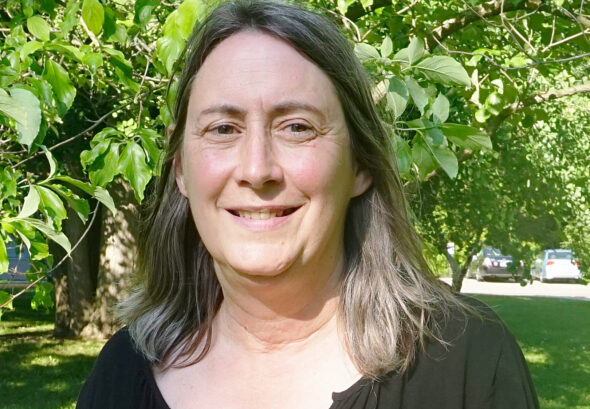 Marilan Moir became Miami Township’s first female trustee — at least in recent memory — when she took the oath of office at the start of the three-member board’s meeting on Wednesday, Jan. 5.

Elected in November, Moir’s four-year term began with the start of the new year. The Jan. 5 meeting also marked the beginning of a second term for Don Hollister, who was re-elected this past fall.

As the first meeting of 2022, the business began with annual organizational matters.

In other appointments, Mucher will continue as the Township representative to the Miami Valley Regional Planning Commission, on which he also serves as chair of the executive board; the Greene County Regional Planning Commission, where he is vice-chairman; and the Grinnell Mill Foundation. Hollister will continue as liaison to the Clifton Union Cemetery board and Yellow Springs Development Corporation, or YSDC. Moir will represent the Township with the Yellow Springs Action Climate and Sustainability Group, a new affiliation for the Township.

In addition, Mucher is president of the District Advisory Council for Greene County Public Health, and Hollister serves on the Solid Waste District Policy Committee as a representative of the Greene County Township Association, though neither position is a Miami Township appointment.

Trustee meetings will continue to be held at 5 p.m. on the first and third Monday of the month, except if the Monday is a holiday, when the meeting moves to Wednesday of the same week.

Hollister reintroduced a suggestion he made when first elected four years ago, recommending that all meetings be held on Wednesdays, but got no agreement. Because the village councils of both Yellow Springs and Clifton meet on Mondays, he said he thought that holding Township meetings on a different day would relieve some time challenges for residents, staff and officials.

Mucher noted that the trustees had changed their meeting time to 5 p.m. four years ago to avoid the direct conflict, and Zopf pointed out that other groups meet on Wednesdays, creating other possible conflicts.

In approving the year’s schedule, the trustees also added Juneteenth, June 19, to the official holidays.

Turning to employee pay, Mucher noted that the trustees typically approve a 2% cost-of-living increase each year, but with inflation rates “close to 6% for 2021,” he suggested considering a higher amount. The trustees agreed to a 4% increase for the new year, retroactive to Jan. 1.

Despite an increase in expenses over the past two years related to zoning matters, particularly in terms of several high-profile hearings before the Board of Zoning Appeals, which involved the hiring of court reporters, the trustees voted to keep zoning fees the same for now.

“Let it ride a year and see what happens,” Mucher said.

“We can always change [the fees later],” Hollister added.

Mucher said he “seriously doubts” that zoning issues will maintain the level of interest raised in recent cases, which included shows presented by comedian Dave Chappelle at the Wirrig family pavilion and use of facilities at the Agraria Center for Regenerative Practice.

In other Township business Jan. 5:

Chief Altman reported that over the two previous weeks, the department had responded to 38 emergency medical service calls and seven fire reports, two of which involved small blazes. One was a stove-top fire on Rice Road and the other occurred about 1 a.m. Christmas morning in a small barn on Fairfield Pike. He said both fires were extinguished quickly, and the barn fire was being investigated as suspicious.

Thomas DeWitt as a new part-time paramedic, filling two positions that have been vacant for several months.

He reported that the department is applying for a $40,000 grant from FEMA to repair aging “turnout” gear, the protective clothing and equipment firefighters wear. He noted that an individual set is about $2,600. The department is also applying for a $20,000 grant from the state to replace its hydraulic rescue set, familiarly called the “jaws of life.”

In addressing department needs and possible costs, Mucher said he would like “to think ahead” about replacing ambulance 81, which has had a series of mechanical issues over the past several years. Mucher also noted that the department’s oldest fire engine is currently out of service because of a transmission issue.

“Do we spend three-quarters of a million dollars on a backup?”

Hollister said he would like to see an inventory of all the department’s vehicles, including the year purchased and estimated life, “so we can look ahead and have a capital plan.”

Zopf gave a summary of zoning activities in 2021.

He told trustees that he issued 18 permits for a total building value of $2,538,500 and accepted permit fees totaling $1,449.25. The permits represented five new homes, five residential additions and eight accessory structures, including four storage buildings, one solar array, one barn and two garages.

The previous year’s number of new home permits totaled two, compared to four the year before that, according to Zopf’s data.

Also in 2021, Zopf signed five survey records, which created six new potential building lots.
In turning to the new year, Zopf told the trustees that he had issued no new permits in the past month, and that the BZA has scheduled a hearing for Thursday, Jan. 13, concerning a setback variance request.

• Mucher reported on the Township’s grant application to the state seeking $125,000 to resurface the road in Glen Forest Cemetery. Noting that the state has received 1,300 requests for funds, he concluded that a successful outcome “might be a difficult row to hoe.” He suggested that if the application is turned down, then the trustees consider directing $60,000 toward resurfacing the worst areas of the road. He said the money could come out of the cemetery fund, which currently has an $85,000 balance.

The next meeting will be at 5 p.m. Wednesday, Jan. 19, because of Martin Luther King Jr. Day that Monday.