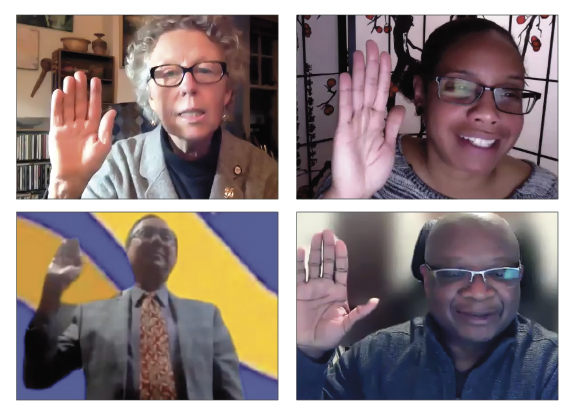 Council aligned their goals with established Village values and were drafted in tandem with the 2022 budget; additionally, each goal has three action steps to be taken in 2022. Some of those steps include forming a task force to review the zoning code, developing and implementing a body camera usage policy for the YSPD, creating a master parks plan that includes maintenance and forming a finance committee to track spending.

Housh said that he was impressed with the work that the Village is going to undertake in the coming year.

“It’s an amazing statement for our village and really continues our action around improving quality of life and delivering on our Village values,” Housh said.

The passage of the resolution does not mean the goals will not be amended throughout 2022, Housh added.

“It’s a living document,” he said.

To that end, Council member Marianne MacQueen suggested an additional goal: to create a closer working relationship with the Miami Township Board of Trustees. She said there used to be a partnership between the two entities prior to the creation of the Comprehensive Use Plan in 2010.

“I’m not suggesting that we do the big visioning process that we did, but I am suggesting that when we are thinking about sustainability — economic and environmental — that we really need to be engaging the township,” MacQueen said.

Housh said that he liked the idea of collaborating with the township to achieve the Village’s 2022 goals.

“It was a 360-degree, full-circle feedback on performance,” Kreeger said.

Council members praised both Salmerón and Kintner for their service over the past year, especially in light of the pandemic.

“I cannot imagine anyone else being at the helm during COVID-19,” Housh said in praise of Salmerón. “Your navigation over the past two years has been incredible.”

“I think our village recognizes how much [Kintner] gives to the community,” Housh said. “I can’t imagine another Council clerk to work with.”

Council passed a resolution to extend a contract with Piper Fernwey to complete the Climate Action Sustainability Plan, or CASP. According to Parcels, the contract ended on Dec. 31. The extension will give Council more time to provide feedback on the CASP draft that Fernwey submitted.

Council also passed a resolution allowing the Village manager to sell Village property that is no longer suitable for use, such as old vehicles and equipment.

“We have a following of people that buy government equipment,” Salmerón said.

According to Salmerón, the Village makes every attempt to use vehicles before selling them, giving examples of two decommissioned police vehicles that he and the police chief use.

Salmerón gave an update on several meetings scheduled regarding the Oberer PUD proposal.

The first meeting, a Council work session with Oberer representatives, is slated for Jan. 10 from 11 a.m. to 1 p.m. The meeting’s purpose is for Council to ask questions and talk through the project with the developer. Salmerón said there will be “a select number of participants invited to weigh in on matters.”

Following the Jan. 12 Council work session, a virtual town-hall-style meeting will be held at 7 p.m. where Village administration and the Oberer team will present the project to the wider community and elaborate on the process and the alternatives to the PUD.

Council will hear readings of the rezoning ordinance at their next two regular meetings, scheduled Jan. 18 and Feb. 7.

In other Council business, Jan 3:

Council heard a first reading of an ordinance that would adopt regulations to help avoid damage from floods. The ordinance is in accordance with recommendations from the Ohio Department of Natural resources and Federal Emergency Management Agency.

Council heard an update from Susan Jennings, a representative of Agraria, who shared successes such as the Big Map Out program, skill-sharing activities, conferences and learning camps for school-aged children. She also noted progress on the Jacoby Creek re-meandering and the construction of a bike path between Agraria’s property and the village.

Lisa Abel of the Yellow Springs Development Corporation gave a year-end report for the group, noting accomplishments, initiatives and goals for 2022. Abel said that she was working on a timeline of business development in Yellow Springs that will give YSDC members a better understanding of the village’s economic needs in the future.

Council heard comments about the Oberer development from Matthew Kirk and Sarah Sinclair-Amend. Kirk spoke in favor of more single-family homes, and Amend opposed the development as proposed. Both Sinclair-Amend and Kirk are Village Planning Commission members, but spoke as private citizens.