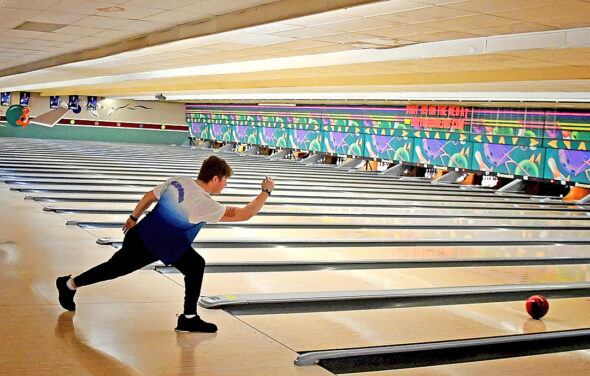 The Yellow Springs High School bowling team advanced as a squad during the district postseason tournament Wednesday, Feb. 23 — a first for the school. Senior Max Sturgeon, above, bowled a 686 in three games (256, 249, 181), giving him a sixth place among the 162 participating players and qualifying him for the state tournament Friday, March 4. (Photo by Michael Knemeyer)

As the first Yellow Springs High School bowling team to advance as a squad from the sectional round to the district matchup of the Ohio High School Athletic Association’s annual postseason tournament, the boys broke the school record for a single game score with 961 pins during the district competition Wednesday, Feb. 23.

Senior Max Sturgeon bowled a 686 in three games (256, 249, 181), giving him a sixth place among the 162 participating players and qualifying him for the state tournament Friday, March 4.

Yellow Springs finished 21st as a team among the 24 competing schools. Juniors Krishan Miller (29th place) and Luka Sage-Frabotta (98th) each scored over 200 points in one of three games: Miller, 185, 214, 198; Sage-Frabotta, 142, 215, 136. Also contributing to the team’s finish were junior Lucas Tomblison and sophomore Eli Matteson.