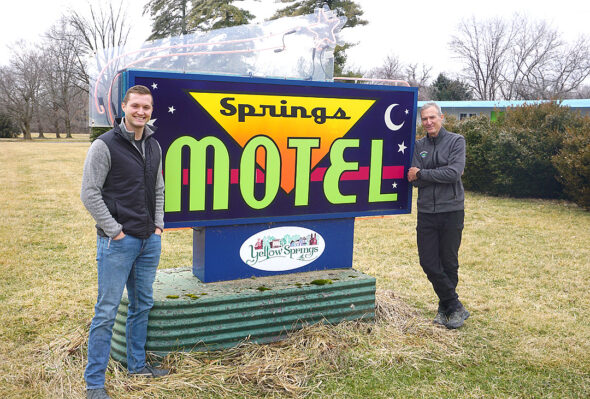 In January, Austin (left) and Tom Knickerbocker, of Knickerbocker Pools & Spas, purchased the Springs Motel. New to the hospi­tality business, the Knickerbockers have spent the last few weeks renovating the 66-year-old motel. Now, it’s back open for business after having been closed for two years. (Photo by Reilly Dixon)

New owners at the Springs Motel

Moving in from just three miles down Route 68 is the Knickerbocker family, proprietors of local business Knickerbocker Pools & Spas.

The father-son duo, Tom and Austin Knickerbocker, purchased the 12-room motel in January for $585,000 from area residents and full-time farmers Kat Krehbiel Johnston and Marc Johnston.

“We drive up and down 68 all the time, so we’ve seen this place for years — and we saw the for sale sign up for a while,” Austin Knickerbocker said in a recent interview. “So, we made it happen.”

In the past five weeks alone, the Knickerbockers have breathed new life into the 66-year-old motel. And now, after sitting vacant for nearly two years, it’s back open for business.

Already the Knickerbockers have addressed a litany of issues with top to bottom renovations.

They’ve repaired the crumbling roof; installed new ceilings, paneling and flooring throughout; outfitted each room with new beds, mini-fridges, cable TV sets and other modern amenities; and doctored up both the interior and exterior with fresh coats of paint.

“We build things for a living,” Austin Knickerbocker said with a smile. “We knew we could rebuild a motel — now we’re just learning to manage one.”

Longtime Miami Valley residents, the Knickerbockers have always been in and around Yellow Springs. Tom Knickerbocker’s father, Don, started the family pool business just south of the village in 1976. Since then, Knickerbocker Pools & Spas has expanded into five additional locations throughout the region.

While Tom has spent much of his life overseeing his family’s business, he has also worked part-time in law enforcement for a number of years. From 1993 to 2018, he was a part-time patrol officer in Yellow Springs — “working as back up whenever they needed me,” he said. Now, he serves in a similar ancillary role for the Greene County Sheriff’s Office.

His 29-year-old son and business partner, Austin, has also spent much of his life in the family pool business. And just like his father, Austin knows how to stay busy. When he’s not hiking, rock climbing or mountain biking around John Bryan State Park, he’s helping his family manage their dozens of short- and long-term rental properties in the area.

The hospitality business, though, is a new endeavor for both father and son — but already, it’s proving to be a successful one.

“Almost the day we closed on the motel, people started coming to us wanting to book a stay,” Tom Knickerbocker told the News. “Even though we were still doing construction, it was hard to turn people away.”

“It’s because we were grandfathered into an already successful business,” his son added.

The Springs Motel’s online presence attests to its popularity. The business boasts hundreds of positive guest reviews, many of which praise the motel’s cozy atmosphere, cleanliness and affordability — qualities the Knickerbockers plan to embrace and maintain moving forward.
Preserving the motel’s classic aesthetics and retro charm is a priority for the father-son team.

“There are some really eclectic relics that will stay,” Tom Knickerbocker said with a laugh. “Take the bathrooms. The strangely-chosen tiles of all different colors — greens, blues, pinks, yellows — are combinations that I don’t think ever really went together, even back then.”

“We’re keeping that kind of stuff just for the nostalgia,” he said.

The Knickerbockers said that the previous owners told them they wouldn’t have to change much in order to bring in business. Krehbiel Johnston indicated that she had many loyal customers — village vacationers who returned to the motel year after year — who have loved the motel “just the way it is.”

“But we still wanted to get the rooms looking a little better,” Tom Knickerbocker said.

While his father is overseeing the bulk of the infrastructural renovations to the motel, Austin Knickerbocker has been focused on bolstering the motel’s digital marketing strategies.

“The day we closed on the motel, I put our [room] listings on Airbnb,” Austin Knickerbocker said. “Immediately, we started getting attention and traffic.”

The Knickerbockers said they’ve long relied on the services of Airbnb.

In addition to the Springs Motel’s 12 rooms, the Knickerbockers’ Airbnb page lists a residential property in Xenia and a 50 ft. sailboat docked in Ft. Myers, Fla. The family also owns a number of other properties throughout the region — mostly in Fairborn, Xenia, Springfield and Dayton — that are used as long-term rentals. They have one long-term rental in Yellow Springs on Davis Street.

“We have dozens of single-family houses, so we really know that business model,” Tom Knickerbocker said. “But for short-term rentals, it’s a whole different thing. The return on investment is much better.”

Both father and son agreed that utilizing their familiarity with the Airbnb platform was the best approach to bringing in business to the motel. They said its benefits were manifold: there’s the streamlined communication between them and their guests, the intuitive interface that allows for easy booking and, most important to them, the accountability factor.

“I think there’s a desire and a need for both parties to try and please the other party,” Tom Knickerbocker said. “The reviews of both the customer and the place motivate everyone to do well by one another.”

“We really enjoy the Airbnb game,” his son added.

Although the Knickerbockers currently rely on the Airbnb platform to list their rooms, they said they hope to soon launch a more personalized website for guests to reserve their stays at the Springs Motel.

Both Tom and Austin Knickerbocker said they were excited to integrate themselves and their motel into the cultural fabric of Yellow Springs. Having seen the growing tourism in Yellow Springs, the Knickerbockers said they’re looking forward to working alongside all the other lodgings in town to accommodate village visitors.

“There’s almost too much demand in Yellow Springs for us to be competitors with the other places to stay,” Austin Knickerbocker said.

They also said they hope their approach to running the Springs Motel and making local connections with nearby businesses will bring a needed economic boost to the southern reaches of the village.

“Essentially, what we hope to do is reinvigorate the south side of town,” Austin Knickerbocker said. “Along with Calypso Grill and the Yellow Springs Brewery Barrel Room, we want to develop this corridor as a hub for current and future businesses.”

2 Responses to “New owners at the Springs Motel”