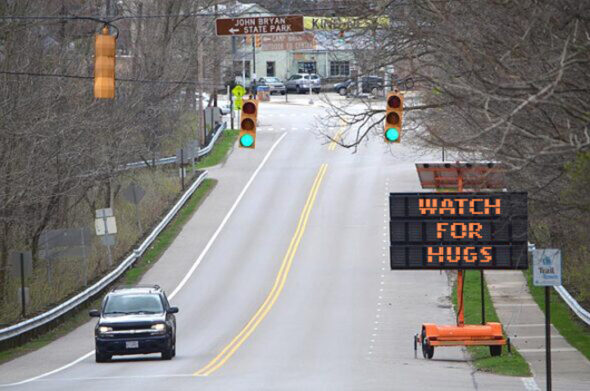 A sign on U.S. Route 68 heading in to Yellow Springs warns unsuspecting visitors to watch their personal space, after Village Council passed the "6 inches of separation" mandate. (Photo by F. Stop Fitzgerald)

In an effort to put the kibosh on rapidly increasing incidents of unbridled, unsolicited and unexpected hugging during the current pandemic lull, Village Council has passed an ordinance mandating social distancing of at least six inches between villagers. 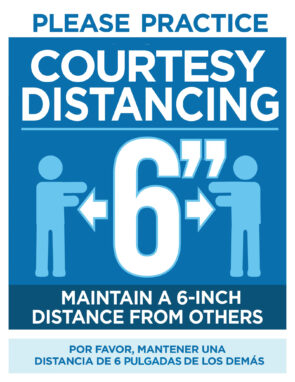 Signs such as the above, reminding villagers to maintain at least six inches of separation, have begun to appear in popular downtown gathering spots after Village Council passed an ordinance instating the new post-pandemic protocol.

“This is hard for Yellow Springers,” Village Council President Brain Hush said in an interview with the Snooze after last Monday’s Council meeting. “Villagers are gregarious; people have not had a good, safe hug in, what, two years, maybe? There’s no way a fist-bump or elbow-touch will do when full-body contact is no longer considered potentially lethal.”

As villagers slowly come out of their pandemic seclusion, the’ve had to deal with an almost insurmountable, pent-up desire to spontaneously hug fellow Springers — coming in or out of Tom’s Market, at the counter in the Emporium, by the gas pump, in line at the Little Art, or even at the recently reopened public restrooms.

“Pretty much anywhere, all the time,” said confused tourist Yuri Hansoff. “I mean, I know this place has a reputation,” he continued, “but I’ve been hugged about six times today. Can’t even finish my coffee.”

Hansoff had barely finished speaking when two villagers simultaneously approached him and awkwardly collided with each other when Hansoff deftly ducked. His coffee did not fare as well, and spilled on the ground.

“I’d get mad at them, but they didn’t even notice,” he said. “They’re hugging each other.”