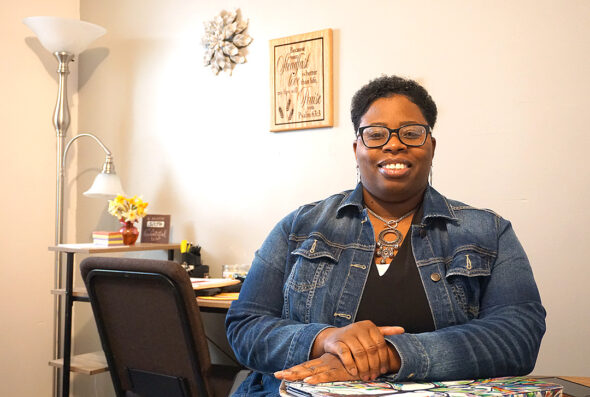 A new pastor has taken the pulpit at Yellow Springs United Methodist Church.

Latoya Warren, a native of Dayton, was appointed to head the 185-year-old church last month after the departure of Rick Jones, who had served as pastor since 2015. Jones is now pastoring Oakwood United Methodist Church.

In a recent interview, Warren said she felt called to accept the appointment in Yellow Springs for a variety of reasons.

“I think God put me here to explore things I’m interested in exploring that I could not do in other churches, or that other churches weren’t open to,” she said. “Part of that is leading [the church] into welcoming a broader audience.”

Warren went on to clarify that broadening the church’s attendance and membership includes aiming to meet the needs of a wider demographic in terms of age, race and socioeconomic status.

She noted that one of the long-term effects of the ongoing pandemic for churches has been the move to virtual services, something many places of worship, including Yellow Springs United Methodist Church, have continued to offer even as in-person worship has resumed. Warren hopes the reach and flexibility that virtual services offer will aid in creating a more diverse congregation.

“I really see it as an evangelistic tool to reach not only your current community, but your neighboring communities, other states and abroad — it’s a way to be more open to a diverse [range of] people,” she said. “I think God is moving a lot of us ministers, and people in other organizations, to help us all live into the new.”

To that end, the church’s virtual services feature a compact program of pre-recorded music, prayers, scripture readings, a children’s message and a sermon from Warren, streamed at 9:30 a.m. on Sunday mornings and archived on the church’s Facebook page.

Though they follow a traditional format, the virtual services sport something of a laid-back tenor, which is reflected in the way they’re characterized by the church — the services are known as “Living Room Worship.” In a recent sermon on forgiveness, Warren invited virtual worshippers to meditate on the topic — which she noted is often a difficult one to consider — in a “relaxed manner.”

“So I’m wearing my sweatshirt, and plan to deliver this message in a more talkative manner versus a preaching manner — but when that holy spirit kicks in, we’ll see what happens,” she said during the message.

Before beginning her work in ministry, Warren had a 10-year career as a cosmetologist. When the salon where she worked closed, she was prompted to go back to school, eventually obtaining her Master of Divinity degree from United Theological Seminary in Dayton.

Warren said she grew up attending church, and that background helped smooth the transition into her career as a minister in 2015. That background also informed her reasons for making the change: She said she has long been passionate about helping Christians in growing their faith through “sound Biblical teaching.”

She also said her time working in a salon was, in some ways, foundational to her current role as pastor. While working as a cosmetologist, she also spent time teaching that trade. Educating others was a part of the job she said she “really loved,” and that she thinks translates well to the pulpit.

More importantly, she said, spending time behind the salon chair involved a lot of “relationship building,” which is crucial for ministers.

“There is a counseling piece to cosmetology — being relatable and allowing people to be vulnerable with you,” she said. “In pastoring it’s a similar thing in that people need to open up to you and form a relationship with you.”

At their root, Warren said, both vocations also rely on a similarly mystical element: their ability to transform a person’s view of themselves.

“I think about reviving and regenerating a person — when you get your hair done, if it’s done well, you feel like the most beautiful thing in the world, and it can change how you see yourself,” she said. “As a pastor, you’re a tangible Jesus for people. You’re sharing hope and life and love with them, so that instead of looking in the mirror, they look inside and feel revived or regenerated on a spiritual level.”

Warren currently lives in Dayton, where she is a single mother to two sons, who are 24 and 14. She said that, even as a pastor, she has never seen the benefit of expecting or cajoling her children to attend church with her.

“I think churches can hold pastors’ kids to high and unrealistic expectations, and I just never wanted that for my children,” she said. “From what I’ve seen, that experience can push those children away. I model what I believe and we talk about it at home, so the door is always open for them.”

Even so, she said she’s invited her younger son, who she described as “tech savvy,” to help Office Manager Marc Welch in recording and streaming virtual services.

“That’s something he used to help me with at my previous church, and he’s debating on it — it’s hard for him to get up early in the morning!” she said.

As she settles in, Warren said she’s focusing on getting to know the members of the church and the wider community. During her first week at the church, she walked around the village and introduced herself at local organizations like the News, the Senior Center, WYSO and the YS Police Department, though she said the cold weather in her first weeks precluded her from meeting as many people as she would have liked.

“I’ve noticed that a lot of people will walk around no matter what the weather is — but I am not one of those people,” she said with a laugh. “Once it warms up, I’m really looking forward to meeting everybody.”

One Response to “New pastor at Methodist Church”