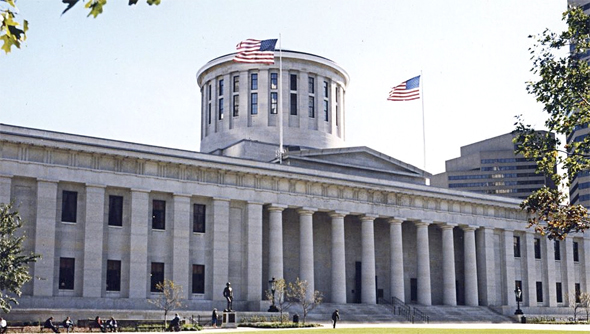 After the Ohio Redistricting Commission’s third attempt at a new set of maps was again struck down by the Ohio Supreme Court on March 16 as unconstitutionally gerrymandered to favor Republicans, the Republican majority on the Commission approved a fourth effort March 28. (Submitted photo)

Absentee and early voting for Ohio’s May 3 primary election opened on schedule Tuesday, April 5, but not all contested races are on the ballot, as the state’s redistricting efforts continue to face legal challenges.

After the Ohio Redistricting Commission’s third attempt at a new set of maps was again struck down by the Ohio Supreme Court on March 16 as unconstitutionally gerrymandered to favor Republicans, the Republican majority on the Commission approved a fourth effort March 28.

Democrats and interested groups such as the Ohio League of Women Voters and the ACLU contend that the latest effort is too similar to the previous plans and should be struck down as well.

Without a validated map, offices of the Ohio House, Ohio Senate and state central committees do not appear on the May 3 ballot, and no new date has been set to vote in those primary contests.

Nor have details about the process for a second primary been determined.

Yellow Springs and Miami Township voters have no local issues to decide in this election. Local ballots include primary races for the state offices of governor, attorney general, auditor, secretary of state, treasurer, chief justice of the Supreme Court and two justice seats.

Other primary races to be decided in the May 3 primary include the U.S. Senate seat currently held by Rob Portman, who is retiring; Ohio’s 10th District representation in the U.S. House; several county judgeships; a Greene County Commission seat; the county auditor; and the county sheriff.

Running for U.S. Senator are Tim Ryan, currently U.S. Representative from Niles, Ohio; Morgan Harper, an attorney and community organizer from Columbus; and Traci TJ Johnson, an IT executive currently based in Columbus.

The Democratic candidates for the U.S. House 10th District are Jeff Hardenbrook of Dayton, a co-founder of the Interfaith Hospital Network and former health care worker; Baxter Stapleton, a filmmaker who grew up in Centerville and lives in Dayton; Kirk Benjamin, of Kettering; and David Esrati, a Dayton community activist and ad agency owner.

No Democrat is running for any of the five open county judge seats, nor the County Commission seat, the county auditor or sheriff. Local residents Lindie L. Keaton and Shonda L. Sneed are running for a single seat on the county central committee.

On the Republican ballot, incumbent DeWine is being challenged by Ron Hood, a former state representative who lives in Ashville, Ohio; Jim Renacci, an accountant, former member of the U.S. Congress and former council member and two-time mayor of Wadsworth, Ohio; and Joe Blystone, a farmer and business owner from East Liverpool, Ohio, running as a “constitutional conservative.”

Seven Republicans have thrown their hat into the ring to fill Portman’s seat: Mike Gibbons, a businessman from northeast Ohio; Josh Mandel, former state treasurer; Neil Patel, a businessman from central Ohio; Mark Pukita, an IT entrepreneur from Dublin, Ohio; Jane Timken, an attorney from Cincinnati; JD Vance, an author and venture capitalist from Middletown; and Matt Dolan, an attorney and baseball team part-owner from Cleveland.