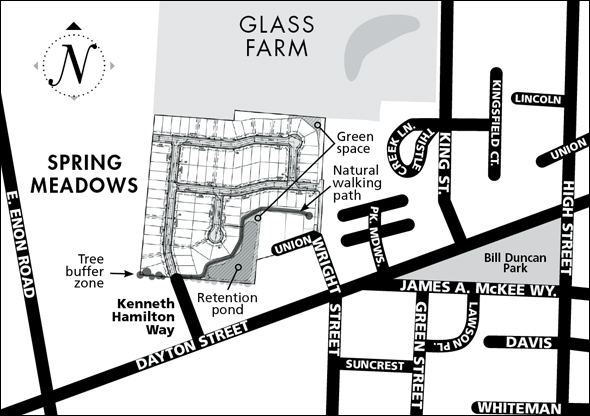 Plans for a new subdivision in Yellow Springs are officially on the table.

Previously called “Glass Farm Estates,” but now being named “Spring Meadows,” the proposed subdivision would be sited on two parcels spanning approximately 23 acres at 402 N. Wright Street. It would accommodate 90 buildable lots — each averaging around 0.25 acres — for single-family homes. Two lots are slated for nearly three-and-a-half acres of open space.

Although the land is still currently owned by Dianne Kinney, the property sale is listed on Zillow as pending, selling for $735,000. Both parcels are zoned Residential-B, or moderate-density dwelling.

DDC’s Land Acquisition Manager Clayton Sears told Planning Commission that his company’s intentions are only to plat out the land and build the future neighborhood’s infrastructure — including roads, utilities, a retention pond, sidewalks and pathways, a park and other features.

“It’s really hard to predict the future that far out, especially with how the market has been fluctuating,” Sears said. “Once we have all this built, we will evaluate what we have and then decide to take a path forward from there. We can’t even commit to a lot price at this point.”

By a vote of 5–0, Planning Commission approved the preliminary application with several modifications related to ecological preservation on the land and increasing the size of buffer areas between the subdivision and surrounding neighborhoods.

Now, DDC has up to 12 months to submit a finalized plat proposal to Planning Commission. Pending the commission’s second approval, the plans would then go to Village Council for review.

“We think Yellow Springs is a great market,” Sears said. “Greene County continues to grow with jobs, and we really feel we can create value here.”

According to YS Planning and Zoning Administrator Denise Swinger, the Village and DDC have met two times over the last several weeks to bring DDC’s preliminary plan into compliance with the Village Zoning Code.

One modification that came as a result of those meetings was the addition of a second entrance.
Swinger reported during the meeting that DDC’s initial plan had just one ingress into the proposed neighborhood off of Kenneth Hamilton Way. Referencing Ohio state law, Swinger said a subdivision containing over 30 lots necessitates having more than one entrance. As such, DDC returned to the table with two entrances: one coming from Kenneth Hamilton Way, and another from North Wright Street.

Planning Commission’s Village Council Liaison Carmen Brown was skeptical of the decision to extend Kenneth Hamilton Way into the proposed subdivision as a point of entry and exit.

“Kenneth Hamilton Way is little more than a glorified driveway,” she said. “It’s not a wide street. There are families that use that street as a congregating area because it’s a deadend. When we talk about using Kenneth Hamilton Way, we’re talking about disturbing that.”

Echoing Brown’s concerns about safety and neighborhood cohesion were several residents of Kenneth Hamilton Way — all of whom were sworn in by Village Solicitor Breanne Parcels to testify before the commission.

“We’re concerned about the safety of our children and grandchildren,” Deb Strain said. “This is real to us. We are not anti-development, we just want it to be done in a safe and positive way.”

Jamie Adoff, whose Union Street home sits adjacent to the land on which Spring Meadows would be built, spoke about his familial connection to Kenneth Hamilton Way and the implications of extending it. Kenneth Hamilton, Adoff’s grandfather, became the road’s namesake after Adoff learned that Hamilton had given the right-of-way and the surrounding land to the Village as a gift in the 1950s.

“The important part of the story is that because of his kindness and generosity, those lovely houses were able to be built right off of Kenneth Hamilton Way,” Adoff said. “I ask only this: that the Village work with the developer in the spirit of my grandfather’s giving and caring nature to develop housing that can be affordable to a diverse population of potential homebuyers.”

Public Works Director Johnnie Burns, who said he has anticipated the development of a subdivision on the Kinney property since 2014, said that Kenneth Hamilton Way has long been eyed as a future ingress to a new neighborhood.

“It goes all the way back to me talking with the current landowners,” Burns said. “They had always intended Kenneth Hamilton Way to be the entrance into [a future] development. It had the larger infrastructure put in — the heavier asphalt, water lines — all to be the main entrance.”

Addressing the concerns about increased traffic on Kenneth Hamilton Way, Sears said DDC will build out the road so that it widens going into the subdivision.

“I can tell you the existing Kenneth Hamilton Way is a smaller road section than what we, as well as the Village, typically require for subdivisions,” Sears said. “So, the road will narrow down as you go out of the subdivision, which will naturally calm traffic.”

Other concerns expressed by commission members and the testifying neighbors concerned preserving the wooded buffer between the Kinney property and the abutting properties on Kenneth Hamilton Way and Union Street.

Of particular focus were lots 53 and 52, which sit in the southwestern-most corner in DDC’s preliminary plat application. Both lots encompass vegetation and natural features that residents seek to preserve.

Kenneth Hamilton Way resident and Executive Director of YS Home, Inc. Emily Seibel called for a more explicit commitment from DDC to preserve that portion of the land, calling it an “ecological corridor.”

“There are so many animals that use that,” Seibel said. “Families of deer, foxes, opossums, coyotes, hawks, kingfishers, herons, indigo buntings, cardinals, owls, blue jays and other songbirds, ducks, ducklings, rabbits, skunks, warblers, bats, treefrogs, toads, fireflies, turtles and a variety of other species.”

Sears said DDC didn’t “purposefully not include the buffer” in that southwestern corner in their preliminary plat application.

“We have met with neighbors and have talked with them, and when we get to the final plan … we are going to do our best to find some sort of buffer along that property line,” Sears said.

Ultimately, by approving the preliminary plat application with the explicit modification to extend that buffer zone in the southwestern corner, “thereby better preserving natural features,” Planning Commission is requiring DDC to include that change in their final plat application.

According to Sears, DDC intends to build the subdivision in a single phase, should Planning Commission and Village Council approve the final plan.

“As far as timing goes, we are hoping to start construction next year,” Sears said. “If we were to move forward a little quicker, then there may be a possibility to start late summer or in the fall. But in no way do we think houses are going to be built here by the end of the year.”

In other Planning business from April 12:

Side rendering of the proposed pavilion to be constructed in front of Peach’s Grill. (Submitted)

Planning Commission also reviewed a conditional use application submitted by Don Beard, owner of Peach’s Grill, to expand his restaurant’s outdoor patio area by building and attaching a new pavilion to the existing building.

With a unanimous vote of 5–0, Planning Commission approved the application.

In a follow-up interview with Beard earlier this week, he said the plan to permanently expand Peach’s outdoor seating options was borne out of the success of the tents he had set up during the pandemic. Beard said those pop-up tents helped customers feel more comfortable dining out during the pandemic, and as a result, “really saved” the business.

The permanent pavilion will extend from Peach’s into the former parking lot in front of the restaurant. According to the application, the structure will not extend further than the storefront of neighboring Ha Ha Pizza.

“I envision it being a two-and-a-half season pavilion,” Beard said at the Planning Commission meeting. “Once we get to the colder weather, November or December, it won’t be in use any longer.”

In the follow-up, Beard told the News he ultimately wants the pavilion to provide his staff with more seating options if they feel they could accommodate it.

“It’ll be nice to have that added flexibility,” he said. “We’re not trying to kill our kitchen or wait staff, but it will help knowing that we’re never going to run short on space. We’ll set up as many tables as we feel we can serve.”

Beard added that he anticipates Peach’s setting up some outdoor games such as foosball, pool tables or shuffleboard in the new pavilion. Construction, he said, will likely begin within the next month.