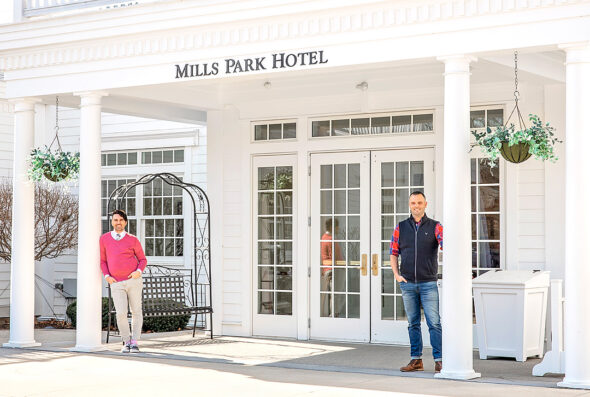 As of April 27, the Mills Park Hotel has new owners: hotel employee Ryan Aubin and his husband, Alex Price. The couple purchased the hotel from its only prior owners, the Hammond family, for nearly $4.5 million. (Submitted photo by Liz Comer, LizCo Photography)

Meet the new owners of the Mills Park Hotel

Ownership of the Mills Park Hotel has officially changed hands.

Jim Hammond, his wife, Libby, and daughter, Katie, have owned and operated the hotel since the family opened its doors in 2016 — the realization of an idea Hammond had in 2012 to help meet the village’s hospitality needs, according to past News reporting.

Featuring 28 guest rooms; a banquet hall; a little eatery, Ellie’s Restaurant and Bakery; and a large open-air patio, the Mills Park Hotel is one of the most distinct buildings in downtown Yellow Springs. The hotel stands at 31,000 square feet and is an architectural homage to the original 1842 William Mills mansion that once stood on the grounds where Mills Lawn Elementary sits.

“In some respects, the hotel is an icon of the community,” Aubin told the News in a recent interview. “It’s an ambassador for Yellow Springs that sets the tone for people who visit.”

Hailing from East Dayton, Aubin and Price were among several interested parties looking to buy the hotel after Hammond announced his intent to sell last year.

Aubin has worked for the Mills Park Hotel for the last three years, serving in several roles: first as a part-time front desk clerk, then as the hotel’s marketing manager and at various times, as a general manager overseeing sales and operations.

According to Aubin, it was Jim Hammond who approached him with the offer.

“I said, ‘Haha. Yeah, right, Jim. People like me don’t have that kind of money,’” Aubin said with a smile. “But Jim said — and I will never forget it — ‘Well, if you’re serious, you should go to the bank and talk to someone.’ So, I went home, talked to Alex, and he said, ‘Yes. Absolutely. Let’s do it.’”

Aubin said the fateful discussion occurred nearly a year ago, after Hammond had already received several offers — none of which, Aubin recounted, impressed Hammond. It was Aubin’s passion for hospitality that made him a good fit in Hammond’s mind.

Now, after months of negotiating small business loans through the couple’s credit union, Aubin and Price have taken the reins. And according to Aubin, things couldn’t be going more smoothly.

“Funnily enough, about half the staff thought the change in ownership had already happened,” Aubin said. “Honest to God, nothing really has changed. The Hammonds have been so immensely helpful throughout this whole process.”

Aubin said one major way the Hammonds have helped Aubin and Price transition into their new roles is simply being present.

“Jim, Libby and Katie have all said, ‘We’ll stay on here and help you for as long as you need us.

Until you tell us to go away, we’ll help you,’” Aubin said. “And Jim’s been here every day since we closed.”

In fact, at the time of the interview, Hammond was upstairs repairing a banister.

The structure of management, day-to-day operations and the overall approach to running a successful small-town hotel won’t change much, Aubin said.

Similar to the Hammonds’ distribution of management — with Libby keeping the books and overseeing the finances, Katie being in charge of Ellie’s, and Jim taking care of property management and operational needs — Aubin and Price aim to split the major duties that come with ownership right down the middle. Price will be in charge of the restaurant and the books, and Aubin will expand his role supervising the hotel’s general operations, while still focusing on sales and marketing.

To help with the day-to-day operations, Aubin said he hired another general manager, Jenn Corcoran, and a property manager, Becky Beaupre. As Aubin put it, Corcoran will mostly help Price with running Ellie’s, and Beaupre will help Aubin on the hotel side of the business.

“And Alex and I will oversee the whole thing,” he said.

Aubin said the existing staff, totaling nearly 50 employees, will continue in their roles.

“We already have an amazing, award-winning hospitality team,” Aubin said. “Every year, the folks here are bringing home so many awards from the Ohio Hotel and Lodging Association. So, I have absolutely no concerns there.”

According to Aubin, his approach to delegating tasks — from the managerial to the menial — is one that was largely informed by watching the Hammonds build a successful business, not on their own, but with the help of a dedicated team of employees.

“That’s one of the biggest lessons I learned from Jim: not to micromanage, period,” Aubin said.
“And I learned that first-hand from him. He never second-guessed anything Becky and I did when we basically ran the hotel after it reopened [after the COVID shutdown in 2020]. He said, ‘I pay you. You know the guests. You know the property. I trust you.’ So, yes, delegation is key.”

The owners, their plans

Aubin, 38, said he and Price, 33, make a good team. He said their differences are complementary and their unique professional backgrounds and specialties make them well-suited to take on ownership of the hotel.

“I always describe Alex as the ‘black-and-white.’ I’m the more ‘gray in the middle,’” Aubin said.

“It was very cursory,” Aubin said with a laugh. “It was awkward at first: ‘Hey, how are you? Blah, blah, blah.’ Band people are weird.”

In the intervening years, the pair left their teaching jobs, got married and moved on to different careers. Price now works as a contract analyst and accountant at Reynolds and Reynolds — a job he intends to keep in addition to taking on co-ownership of the hotel.

Before coming to the Mills Park Hotel in 2019, Aubin worked with his sister at a small art studio in Kettering. According to him, he only sought the front-desk job at the hotel to help him earn a little more vacation money.

“I’d say at first Alex was probably more enthusiastic [to buy Mills Park] than I was,” Aubin said. “He had always said all along that it’d be so cool to own the hotel.”

Aubin said he and Price took the first step toward ownership — “just talking to someone,” as Hammond recommended to him — when they were at their credit union negotiating a line of credit to renovate their home in East Dayton — the same home that Aubin grew up in. On a lark, Aubin brought up Hammond’s idea.

Looking at the couple’s backgrounds — Aubin’s in marketing and Price’s in finance — their financial advisor thought they were a perfect fit for taking over the hotel.

“In theory, I should be able to bring people into the hotel and Alex ought to be able to account for everything,” Aubin said.

When asked if the couple takes their work home with them, Aubin exclaimed, “Are you kidding me? We had to create a whole new home office!”

Although Aubin and Price have spent the recent weeks improving internal operational efficiencies and implementing cost-savings, such as finding more affordable linen vendors and utility providers, Aubin said “not a thing” will change for what he called the “guest experience.”

“I feel like the hotel is so popular because of what it already is,” Aubin said. “All of the aesthetics are staying. The decorations, Ellie’s, the corgis, all of it.”

A baby grand piano — which Aubin said was a gift to himself — has, however, appeared in the hotel lobby.

Looking ahead, Aubin believes the future is bright for the Mills Park Hotel.
He said in 2021, nearly 13,000 people stayed in the hotel, and already, 2022 is on track to bring in even more guests. According to Aubin, Mills Park is booked out all the way through November.

“Which is a good problem to have,” he said.

Beyond accommodating all the visitors that come to Yellow Springs, Aubin said he hopes the Mills Park Hotel can appeal to local residents.

“To the villager at home: Alex and I are approachable people,” he said. “We certainly hope that everyone feels welcome here. Come get a bite to eat. Take a peek in the gift shop. Come say hi. You’re welcome here.”