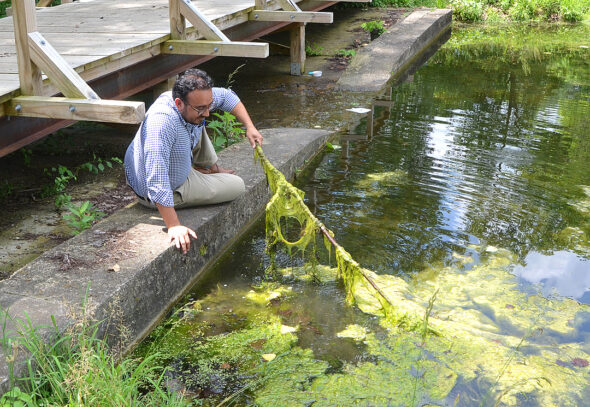 Village Manager Josué Salmerón recently showed the News the growing algae problem at Ellis pond. Pictured above, Salmerón is shown lifting an algae-covered tree branch from the pond’s surface, which is largely covered by the algal bloom. (Photo by Jessica Thomas)

A trip to the edge of town to have a picnic by Ellis Pond could be an idyllic way to spend the afternoon; but for the last few years, Ellis Pond has become increasingly covered in algae. After several attempts at environmentally friendly mitigation techniques, the Village plans to treat the pond with herbicide to kill the algae.

Village Manager Josué Salmerón addressed the issue during his manager’s report at the June 6 Village Council meeting, asking for Council to approve the use of herbicide to kill the algae.

“It is absolutely necessary at this point,” Salmerón said. “We’ve exhausted every environmentally friendly resource at our disposal that is cost-effective.”

Salmerón’s concerns were echoed by Mark Carr, who brought a sample of the pond water to show Council members the state of Ellis Pond.

“This is a social justice issue,” Carr said. “Ellis Park is the only safe, accessible access for nature observation and fishing. The pond conditions discourage use of the park and arboretum.”

Salmerón has been eyeing the algae issue for over a year. In May 2021, Salmerón alerted Council members to concerns about the pond’s health after 40 fish, a snake and a turtle were found dead and floating at the top of the water.

“There was no definitive link between the algae and the fish kill,” Salmerón said in a follow up interview and tour of Ellis Park. “But there was a lack of oxygen and a sudden change in temperature in the water.”

In the interim months, Salmerón and members of the Village staff have installed three fountains to provide aeration to the pond, using grant money. In addition, the Village installed barley bales, which are known to stop algae from growing. According to a pond and lake management publication from Rutgers University, barley straw is only effective in reducing algae.

“We think there are at least two types of invasive plants that are causing the issues,” Salmerón said, explaining that part of the long-term effort toward Ellis Pond’s health will include identifying all the plant species found in the pond and working to eliminate those that could potentially do harm.

At the June 6 meeting, Council member Marianne MacQueen said that she would like to wait for feedback from the environmental commission before moving forward with herbicide.

“No fix is one-and-done,” MacQueen said. “There are various options, like an algaecide, and I’d like to agree on a plan to do that before coming back and getting approval to put in herbicide.”

An algaecide would target algae, while herbicide, depending on the brand, would affect other plant species in the pond.The Village has had a de facto policy against the use of herbicide since 2013, when Village employees sprayed four undiluted gallons of the herbicide Escalade 2 around the pool at Gaunt Park, resulting in a closure of the pool and concerns about long-term health effects of the chemicals found in the herbicide. Laura Curliss, who was village manager at the time, claimed that the herbicide was safe two hours after application, but an investigation into the incident showed that Village crews did not properly dilute the chemical and applied it without obtaining a commercial applicator license.

Salmerón said that he has taken the 2013 incident into consideration, and plans to contract with Aquatic Plus Pond Management, a Waynesville LLC that specializes in pond treatment for the Dayton area and beyond.

“They will use an herbicide that does not affect the wildlife,” Salmerón said. “It’ll take months, because the herbicide will be applied in doses.”

In addition to applying the herbicide, Village crews will work with Aquatic Plus Pond employees to remove some of the existing algae and plants.

“The ultimate solution is dredging the pond,” Salmerón said, explaining that the cost of doing so would be around $200,000 — a figure too high for the Village budget.

Salmerón said that the long-term plan for pond health would include testing pond sludge to determine what is in the water.

“Doing so will allow us to apply for grants that target specific problems,” he said.

In addition, Salmerón said he would like to plant vegetation that would help to filter water coming into the pond.

Following the June 6 meeting, MacQueen, Salmerón and Public Works Director Johnnie Burns met to further discuss the issue. According to a memo from MacQueen to members of the environmental commission, the group agreed to use herbicide as a short-term measure.

“I reached out to several people; in particular, to Zach Bollheimer at the Glen,” MacQueen said. “Zach walked the pond with Brian Housh and me and made a number of suggestions (echoed by others) for more long term strategies to address the cause and not just the symptoms. At the same time, Zach also said he felt the herbicide use in this case was justified.”

MacQueen said that in the meantime, she would like Salmerón and Burns to work closely with environmental commission members to create a policy for the use of herbicides and pesticides.