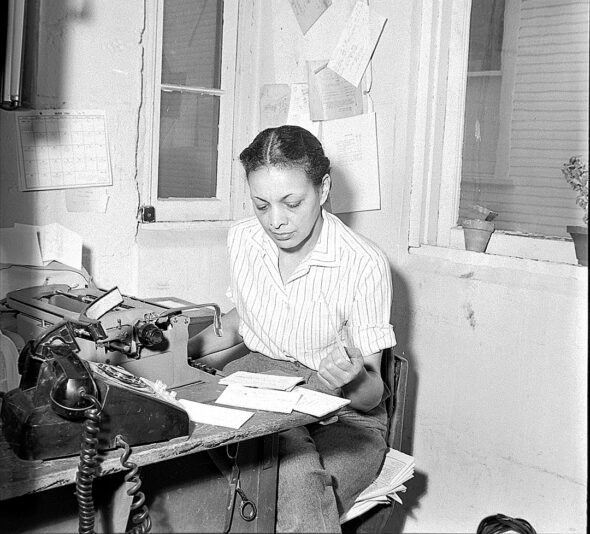 1964 Editorial | What the Negro is trying to say

The following article appeared in the 2020–21 Guide to Yellow Springs: A Legacy of Activism in the Village. Click here to read more articles from that year’s guide.

About a month after the Gegner incident, Pat Matthews, a Yellow Springs News staff member, and later, columnist, wrote this editorial, which was published in newspapers throughout the country and attracted national attention. It is reprinted here from the April 23, 1964, edition of the News.

With sit-ins, pray-ins, stall-ins, walk-ins, lie-ins, cry-ins and picketing, the world is still asking “What does the Negro really want?” Maybe we have not expressed ourselves as clearly as we could or should but we know the desires that motivate our actions, whatever they are, and we may not know where we are going but we know where we would like to go and use the only methods available in our attempt to get there.

What do we want?

A Negro man sees a sign or an ad in the paper that says “House for Sale, Veterans No Down Payment — $65.50 a mo. Nice Neighborhood. Insurance included.” He would like to say, “I make $100 per week. I am a veteran, I want the house.”

If he has $3 and is hungry he would like to go into a restaurant and order a steak dinner, be served without being refused or have the proprietor act as though he wants the waitress to sit on his lap.

If he wants a haircut, he would like to pay the price, whatever it costs, receive service and not be treated as though the barber thinks he wants to join him in a friendly round of drinks and a card game.

A man making $6,000 per year would like to know that he too can purchase a car, a home, decent clothing, educate his children and still not starve to death by having available to him one loan for which he makes a reasonable payment each month, instead of having to make several small loans repaid in unreasonable amounts and at high rates of interest. This, my friends, happens all over the United States as he watches his white friends achieve more and more, working no harder and possibly shorter hours.

When he reads of the murder of Medgar Evers, the respected Negro leader, in Mississippi, he would like to see the slayer convicted, not hailed as a great hero. If a Negro commits a crime of lesser degree, he is seldom tried in Mississipi; he simply disappears — lynched? enslaved? drowned? Who knows?

When the civil rights bill is in the Senate, he would like to have some feeling of assurance that the men elected are really trying to pass a good law instead of seeing a few men waste valuable time reading recipes for a new spring salad or 50 new ways to cook hamburgers on a cookout.

The Negro would like the opportunity to be hired for a job on the basis of his qualifications and not have to always “be better than the other man” in order to do the same work, and not be closely watched to see if he is contemplating an interracial marriage.

He, too, would like the privilege of “choosing his neighbors” and saying to the other man “don’t worry about having me for your neighbor, I’m more worried about having you for mine — you are the type of person by whom I don’t want my children to be influenced.”

He wants the opportunity to send his children to the best schools with the finest facilities, to the well-recommended colleges and universities, without filling a “quota” or representing token integration.

He would also like to see members of his race truly represent him — not chosen by a group and controlled by the same in order to say “we have a Negro representative.”

And lastly, we even want the right to have a few obnoxious persons in our race — our Wallace, Eastland, Long, William Miller, representative Howard Smith, etc. — without being called ignorant.

In other words, we want the right to pick and choose, make our own decisions, laugh, live and love, make mistakes as individuals, have our “types” of people in all walks of life and still not be labeled as “the colored folks.”

The masses of people know that they want these things. Most of them are unsure of how to say them and their methods of achieving them are few, but they know what they want. Won’t you listen? ♦