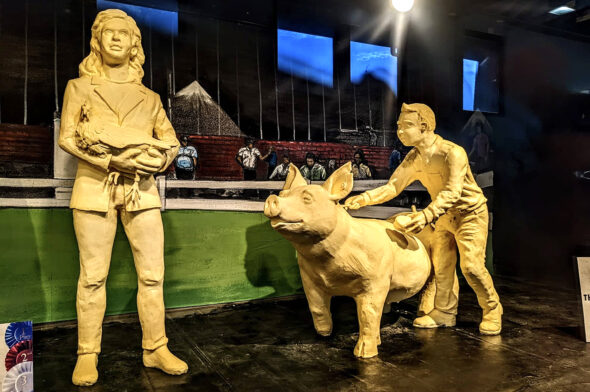 A vignette from this year’s butter sculpture at the Ohio State Fair. (Photo by Lauren “Chuck” Shows)

All I Care to Eat | Time enough at last (for eggs)

Growing up in rural Kentucky, my sister and I had a mass of orange daylilies that grew outside the window of our shared bedroom. These flowers were something of a timepiece for us, two kids who could not yet read a clock; like all kids, I suspect, we were aware on a bone-deep level of the forces that kept us from our very important work of playing around.

And so we measured time in this way: Waking to find the flowers fully illuminated, bright orange in the summer morning sun, meant we were burning precious daylight and should be outside. When the flowers’ hue, viewed from the backyard, turned to rust and purple shadow near the end of a long, warm day, it was time to pack it in. Likewise, their blooms’ propensity to flower and wither within the space of a day was its own kind of ticking clock; when the daylilies had disappeared, summer was usually more than halfway gone.

In my adult Yellow Springs summers, I now have orange daylilies outside my living room window, which my husband planted for me as an annual gift to my own memory.

And as I did when I was a kid, I still vibrate with the anxiety of knowing the time for playing around is short, and always, it seems, growing shorter.

But to get to the food, which is supposed to be the point of this column, and somehow almost never is.

My family and I went to the Ohio State Fair this month, an annual tradition for us that returned for the first time in three years. I was bristling to get there and check out all my favorite haunts: the flea market in the old Machine Exhibit building; the ODNR Natural Resources Park; and the displays of prize-winning entries from a wealth of horticulture and floriculture categories, like amateur floral arrangement, micro garden design and, perhaps my favorite, “longest and best green bean.”

There is also, of course, the annual butter sculpture on display in a refrigerated case in the dairy pavilion. Past sculptures have been themed around everything from Furby to Wendy’s founder Dave Thomas to “a salute to chocolate milk.” This year’s theme, which celebrated Ohio’s agricultural heritage at a fair intended to do the very same thing, seemed a little on the nose, but the artistry was on point. I hope next year they go really conceptual and make a butter sculpture of butter.

But the main attraction was the food. After three years of waiting and — I shamefully admit — a tendency not to eat much at the fair in years past because of the heat, we had picked a cool, rainy day and I was ready to give it all I had.

I sampled loaded corned beef fries, dressed and sauced up with onions, mushrooms, cheese and some kind of tangy, mayo-based concoction that was a little overwhelming, but worth trying. Then there was the dairy pavilion’s signature fair ice cream flavor, “Red, White and Blueberry” — vanilla with strawberry pieces and a blueberry swirl — just a total delight.

Maybe the best thing I tried all day were the “Soul Rolls” from the Hickory Street BBQ truck on the midway; these were macaroni and cheese and spicy collard greens, encased in an egg roll wrapper and deep fried. I still think about them about twice a day. And of course, I had my fair favorite, fried cheese on a stick, which is exactly what it sounds like and never a mistake.

The most adventurous dish was a 2022 State Fair original: lemon meringue deviled eggs. (Just stay with me here.) I wasn’t exactly sure what to expect when I ordered them at the fair’s Taste of Ohio Cafe, which features foods representing Ohio’s pork, beef and poultry industries. When I ordered the eggs, before I even received them, the person behind the counter handed me a large sticker that said “I Tried a Lemon Meringue Deviled Egg at the Ohio State Fair.”

The person behind the counter shrugged, and handed me a cup with two of the eggs in question. I noted that the standard order came with two eggs, but the sticker insinuated that I would really only be able to manage the one.

In the end, it was a weird, but not totally unpleasant experience. The traditional egg yolk filling had been whipped with sugar and lemon juice, and was topped with a lovely, crispy homemade meringue. But at the foundation of the dish was the expected boiled egg white, which, if nothing else, presented a fun textural challenge.

I never made it around to some of the other dishes I had wanted to try, like the cornbread funnel cake and the shrimp-alfredo-stuffed turkey leg. When it was time to leave at the end of the night — after taking a couple of hours to see 89-year-old legend Willie Nelson put on a heck of a show — I felt a little frantic. Did I do and see and, importantly, eat everything I wanted to?

The daylilies — metaphorically speaking, of course — had retreated into darkness, and it was well past time to head back to the car and home. We left the fair and headed toward the parking lot.

Then something unexpected happened. My husband, daughter and I followed the path of a fence away from the fair and toward the parking lot, but our part of the parking lot never came. After about 10 minutes of walking down a gravel path and behind unmarked buildings — somehow — we turned a corner and were back inside the fair.

It wasn’t intentional; all three of us being tired and not always directionally sound, we weren’t sure how it happened, as we certainly hadn’t made our way back through one of the public entrances.

But we laughed and marveled — and groaned a little at the knowledge that we still didn’t know how to get to the dang parking lot — and thanked whatever force had granted us just a little more time beneath the lights of the fair to play around together.