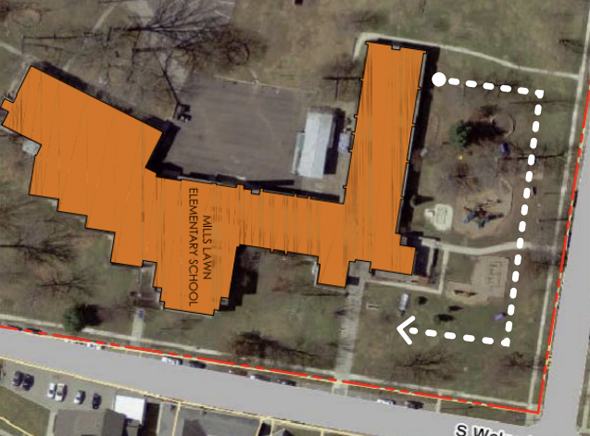 During the YS Board of Education's most recent monthly work session on Monday, Aug. 29, Superintendent Terri Holden discussed the possibility of installing 600 feet of fencing at Mills Lawn Elementary to enclose the student playground. (Image taken from BoE presentation)

The YS Board of Education held its monthly work session on Monday, Aug. 29, at which discussion centered around security and safety in the schools. The work session follows months of discussion on these topics by the board and community members at regular meetings, taking into consideration recent instances of school violence in the U.S.

During a presentation on new safety and security policies and equipment adopted by the district, Superintendent Terri Holden asked the board to consider the possibility of installing fencing at Mills Lawn, which would enclose the school’s younger student playground. The fence’s perimeter would run north from near the school’s entrance on South Walnut Street, and then west along Elm Street, meeting the edge of the building past the playground’s gaga pit.

Holden indicated that district officials have been discussing the possibility of fencing in areas of Mills Lawn’s campus “for a long time.”

“It’s just another barrier, but in the day-to-day, [a fence would] really help teachers — we can contain the children,” she said.

Holden reported that 600 feet of fencing would be needed to enclose the playground, with a projected cost between $15,000 and $18,000. In a follow-up email with the News, Holden clarified that the district is “in the process of getting official quotes” for the cost of the fencing, and that the numbers supplied at the work session are “only an estimate.”

Several board members spoke in support of the fence. Board Vice President Dorothée Bouquet reported having found hazardous materials like broken glass and a vaping device on the playground, which she surmised had been left behind by nonschool visitors to the school’s open space. Board member Judith Hempfling added that such a fence is “a pretty normal thing” for many regional schools.

Board member Luisa Bieri Rios also mentioned the ongoing issue of animal waste on the playground, often left behind by community members and visitors who walk dogs in the area. The problem, she said, has long been pointed out by administrators and even students themselves; Bieri Rios cited her own child’s kindergarten class project nearly a decade ago, in which students implored community members to clean up after themselves in letters to the YS News.

“I would like to see a plan of what it would look like to move forward at a future board meeting,” she said.

“I will make sure [at the next regular board meeting] on Sept. 8 that you have an actionable item,” Holden replied.

In a follow-up email, the News asked Holden if the Mills Lawn playground, which is closed to the public during school hours, will remain open after school and on weekends for community use. She responded that “there has been no decision made on this.”

Holden’s presentation also clarified and expanded on information she presented at the board’s last regular meeting on Aug. 25.

By way of a $72,000 grant the district will receive through Ohio’s K–12 School Safety Grant Program — for which the district applied, but did not immediately become eligible, last year after funding ran short — Holden said the schools have purchased additional security cameras and two-way radios to help shore up school security.

The two-way radios, according to Holden, will be used by “folks who are key in responding to things,” including principals, counselors, the athletic director and herself. However, she noted, the radios, which were purported upon their purchase to facilitate communication across at least two miles, do not allow those at the district office or Mills Lawn to communicate with those at McKinney and YS High schools. The district, she said, will have to purchase a repeater, which will help extend the signal of the radios, at a cost of around $17,000.

The grant will also cover the cost of an additional 16 surveillance cameras at Mills Lawn, bringing its total number to 28; and an additional 25 at the middle and high schools, for a new total of 53.

The new cameras, which will be installed by nearby MVECA, will be split between interior and exterior locations at both facilities. The cameras will include video surveillance displays for front office staff, principals and Holden; the cost of the displays, she added, will not be covered by the grant.

Using the new software, all visitors to school facilities will need to present a photo ID to be scanned and verified at tablet terminals to be located in the front offices of both facilities. This new protocol includes volunteers, who must now receive clean FBI background checks, paid for by the district, before working in the schools.

The terminals will also be used, Holden said, to have students sign in when they arrive late to school.

Holden had previously reported at the Aug. 25 meeting of the board that large groups entering the schools after hours for events like open houses and Exhibition Nights would not be required to sign in. However, at the work session, she said the district is “rolling back” that decision, and is considering making a policy for large group check-ins. The consideration, Holden said, follows an incident at St. Brigid School in Xenia last week, in which a person attempted to gain entry to an open house with the reported intent to harm a child.

The recent purchase of locking mechanisms for interior doors at the schools was also reported by Holden, who declined to name the company that supplies the devices or comment extensively on how they operate for security reasons. Holden also did not disclose the cost of the mechanisms, but the district did not publicly solicit bids for the purchase or installation, which is a requirement for school improvements that cost more than $50,000.

She did say, however, that the locking mechanisms can be operated by teachers in the event of an emergency involving an active shooter.

“We’re talking about pretty much one situation in which [the mechanisms] would be used,” Holden said, and added that the district had been in communication with the YS Police Department, Miami Township Fire-Rescue and Village government in order to have the mechanisms approved.
Holden added that a second round of Ohio K–12 School Safety Grant Program funding may become available to the district, which could help cover the cost of the two-way radio repeater, the visitor management software, the security camera displays and the locking mechanisms.

At the end of the meeting, the board retired into executive session to discuss “specialized details of security arrangements.”

A video of the full Aug. 29 board work session is available online at youtu.be/XNIFX0CJ8gs. To view the meeting’s agenda, which includes a full record of email communications from community members on school safety and security the district has received since May, visit bit.ly/3pWiL9T.