Cincinnati native Napoleon Maddox will present excerpts from musical and spoken word works in collaboration with Tronee Threat and the World House Choir on Thursday, Oct. 13. Maddox is pictured dressed as Haitian Revolution leader Toussaint Louverture at Château de Joux, where Louverture was imprisoned and died. Maddox composed “L’Ouverture de Toussaint,” a portion of which will be performed in Yellow Springs, about Louverture. (Music video still)

History, generational struggle and legacy will be the unifying themes of “Louverture Exchange: A Musical Dialogue,” a performance featuring the World House Choir, hip-hop artist and local resident Tronee Threat and headlined by international performer Napoleon Maddox on Thursday, Oct. 13.

The performers will also hold discussions and educational events for students at Antioch College and Yellow Springs Schools on Monday and Tuesday, Oct. 10 and 11.

The News spoke with Maddox, Tronee Threat and World House Choir Director Cathy Roma over the last several weeks in the lead-up to the performance.

Maddox, a Cincinnati native currently living in France, has a performing career spanning several decades that includes hip-hop, jazz, blues, funk and theater. He is a founding member of the Cincinnati hip-hop trio iSWHAT?!, and went on to form the Franco-American duo Sorg & Napoleon Maddox with French beatmaker Sorg.

Working with Sorg, in 2017 Maddox created a musical and visual piece, “Twice the First Time,” which employs jazz, hip-hop, spoken word and scenography to tell the story of famed 19th-century conjoined twins Millie and Christine McKoy; Maddox will perform excerpts from “Twice the First Time” during his Yellow Springs appearance.

The McKoys — who often signified their movement through life in a shared body by stylizing their names as Millie-Christine — were born enslaved in Whiteville, N.C. in the mid-19th century. The pair were, at different points in their enslavement, sold and kidnapped and compelled to work as sideshow performers. Following their emancipation from enslavement, the women continued to perform for much of their lives, and were known around the world as “The Carolina Twins” before their deaths at age 61.

“Twice the First Time” examines the exploitation of the McKoys, setting their story upon the foundation of their enslavement, ruminating on how the sisters maintained their dignity and autonomy despite being objectified and posing queries about how they would view and interact with the modern world.

Maddox told the News that he chose the McKoys as subjects for his work not only because of a family connection — they are his great-grand aunts — but because of an artistic connection to the lives they led.

“Their story has some parts that are difficult, but they also have a story that we can be proud of,” he said. “Where I always go for inspiration is … ‘What is there for me to learn from this story? And how can I personalize it? … Then when I start to create, I have something to offer the audience.”

One thing audiences can glean from the McKoys, he said, is perseverance in the face of persecution — a thematic element also present in his 2021 performance work, “L’Ouverture de Toussaint,” excerpts from which he will perform in Yellow Springs as well.

“L’Ouverture de Toussaint,” true to its title, uses hip-hop, jazz and readings to sketch the story of Haitian general Toussaint Louverture, who led the revolution of enslaved Haitians against France. Like “Twice the First Time,” “L’Ouverture de Toussaint” confronts the pervasiveness of white supremacy; augmenting a famous lyric from Public Enemy’s Chuck D, Louverture tells the audience: “I got a letter from the government the other day; I opened and read it, it said they were suckers. How many empires must get dissed before they understand we ain’t having it?”

Maddox created “L’Ouverture de Toussaint” as part of a two-year artist residence in France. He said that, as with the McKoys, he felt drawn to Louverture’s story; Louverture did not live to see Haiti’s independence, dying months before it was declared. But Louverture’s work, Maddox said, was not for himself, but for future generations — a quality with which Maddox said he felt an affinity.

“The physical warfare part of his contribution, for me, really is not the first thing — the first thing is the vision, and it served generations to come,” he said. “And that’s where I’m going looking at ancestry and legacy — if I live my life to the fullest, things that I do today will be of benefit to someone who will never meet me.”

He added that this theme is reflected in one of his favorite lines from the show: “​​If I can do it in a lifetime, is it really a mission?”

But Maddox’s bond with Louverture stretches even further, he said; while completing his artist residence, he lived in Besançon, not far from Château de Joux — formerly Fort de Joux — where Louverture was imprisoned and died in 1803. Maddox’s physical location and the historical connection of his own first name — Napoleon Bonaparte was a political and military foe of Louverture — were spurring forces in his decision to create the show.

“Napoleon Maddox is my given name … but politically, if I were to choose my own name, then I would choose a name like ‘Toussaint Louverture’ or one of my other heroes,” he said. “And being here in the city [near] where Louverture was in prison and where he died — it really resonated with me.”

In August 2021, Maddox was able to debut “L’Ouverture de Toussaint” in the courtyard at Château de Joux. Performing the show with Sorg, Haitian-Canadian musician Jowee Omicil and Malian musician Cheick Tidiane Seck, his words drifted up to the window of the cell in which Louverture was imprisoned.

“I don’t really believe in coincidence — I believe very much in purpose, direction and providence,” he said.

Perhaps it was providence, then, that brought Maddox into the orbit of Tronee Threat, the performing name of Guy Banks. YS News Editor Cheryl Durgans, who organized the collaboration between the performers, met Maddox via the Wilmington College Westheimer Peace Symposium, where he was a virtual presenter in 2020; and met Banks earlier this year when she reported on his performance with World House Choir, led by Cathy Roma, following his release from prison. (Banks previously performed with UBUNTU, the men’s chorus at London Correctional Institution, under Roma’s direction.)

Banks said that, upon meeting Maddox via Zoom in preparation for the joint performance, he felt a “connection” to his fellow artist. Like Maddox, Banks said that his own work as an artist is drawn from a deep well of interconnections between his own history and the history of Black Americans.

“Every day I’m living right now is purposeful — waking up every morning with a specific mission,” he said. “Every song that I’m doing is about legacy … Black culture and continuing to be proud of what we came from and what we created.” 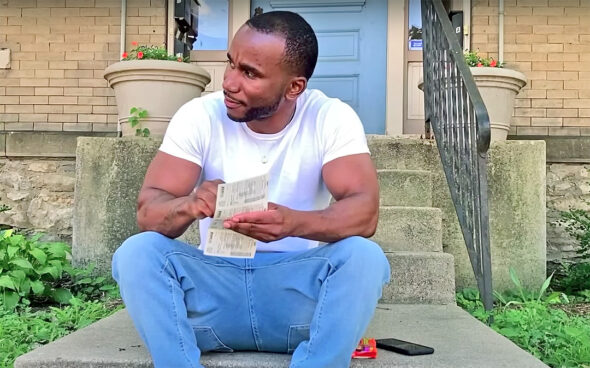 Local resident and hip-hop artist Tronee Threat, the performing name of Guy Banks, will perform as part of Thursday’s concert. He is pictured in Yellow Springs in a still from the recently released music video for his song “Die On Me.” (Music video still)

As Tronee Threat, Banks pens his own lyrics, but he also produces his own backing tracks — a practice he said is “not typical” for many hip-hop artists. During his interview with the News, he performed an excerpt from a new track he plans to debut at the joint performance. Entitled “I Don’t Break,” the song meditates on striving for a goal despite hardship and persecution.

Banks writes: “The time is now, why wait, why wait? Had enough sleep, I’m wide awake, wide awake. … Don’t know when the next time I’ll rest my eyes, I’ll run the streets all day, I can sleep when I die.”

His lyrics call forth the desire to aim for the kind of success that will outlive him — which, as mentioned previously, is also a thematic throughline in “L’Ouverture de Toussaint.” Banks said he is not surprised that both artists have hit upon similar motifs.

“Put two Black men full of purpose in a room, know that they unlocked the part of their consciousness where they ain’t just walking around everyday blind … and get them to talk, get them to write, get them to sing, and you’re going to hear some of that — it’s just automatic,” he said.

Banks said he and Maddox had hoped to connect more in advance of the joint performance, but timing and the great distance between them hindered their ability to do so. Even so, he said, it seems as if their creative work aligned — providentially — without their having met in person.

“It’s one of those things where, when it’s meant to be and how it’s gonna happen, it just lines up,” he said.

World House Choir, Tronee Threat and Napoleon Maddox will present “Louverture Exchange: A Musical Dialogue” on Thursday, Oct. 13. The performance will begin at 7 p.m. at the Foundry Theater on the Antioch College campus; admission is free. The event is a community partnership between the Coretta Scott King Center at Antioch College, YS Schools, The 365 Project, the YS Community Foundation and the World House Choir.

Maddox will perform the full-length production of “L’Ouverture de Toussaint” at the Underworld Black Arts Festival on Sunday, Oct. 23, beginning at 6 p.m. in the Woodward Theater in Cincinnati. The festival, which Maddox helped launch in 2018 as the Underworld Jazz Festival, will also feature a DJ set from Jarobi of A Tribe Called Quest. For a full line-up of events, visit underworldjazzfestival.com.