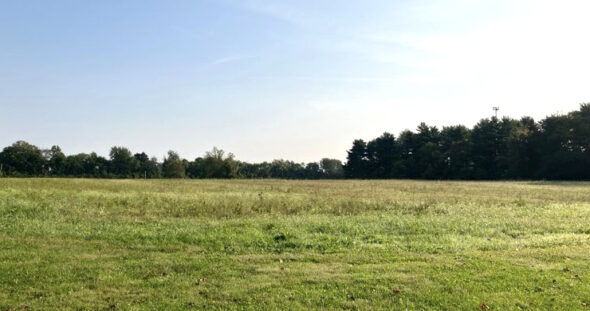 The Village-owned Sutton Farm, located on State Route 343, is being considered for a large-scale municipal solar project. However, a conservation easement on the land prohibits any kind of development that does not "improve the conservation values" of the land. (Photo by Reilly Dixon)

In line with the ongoing efforts to generate more renewable energy for its residents, the Village of Yellow Springs is looking to build solar photovoltaic arrays on a number of municipal properties.

Sites up for consideration are the Village-owned Sutton Farm, located on State Route 343, and the parking lot at the John Bryan Community Center. Additionally, several Village buildings are being eyed for rooftop solar arrays.

The Bryan Center project — which would entail creating a solar canopy pavilion featuring a roof with at least a 200-kilowatt capacity and vehicle parking and event space underneath — was initially proposed by Village Manager Josué Salmerón in a December 2020 Village Council meeting.

However, as Salmerón told Council at its Sept. 6, 2022 regular meeting, financing that solar pavilion has proven to be challenging for the Village government.

“It would be over $700,000,” Salmerón said at the meeting. “And the energy utilization of [the Bryan Center] is not enough to offset that cost. If we — as a utility — were to buy all of that electricity [generated from the pavilion] and sell it to our residents, it still wouldn’t be enough to make that project financially feasible.”

Salmerón explained to Council members that the most viable route to bankrolling the parking lot project would be to invest in an additional, larger utility-grade project that would allow the Village to purchase photovoltaic panels in bulk — at a cheaper cost per panel — and eventually, generate more renewable energy to be sold to village residents.

That’s where Sutton Farm comes in.

“There are very few sites [on Village-owned property] where we could place a one- to two-megawatt system,” Salmerón said. “That’s Sutton Farm and Glass Farm. Sutton Farm was appealing to us because it’s right outside of the village, it’s right next to our Public Works site and we have the transmission lines running to that site that feed back to our switch station.”

Although Salmerón said Glass Farm’s centrality within the village would prove to be the more practical option, he said that site’s “political volatility” made Sutton Farm out to be the best location for a new solar array.

“All power generated at Sutton Farm would be consumed only in the village,” Salmerón told the News in a separate interview. “It wouldn’t go elsewhere. We have enough consumption that none of those electrons would leave our grid.”

Salmerón said that such an array would yield solar energy for municipal consumption at 6 to 6.5 cents per kilowatt hour, which, he explained, generates the “economy of scale” needed to finance additional solar projects on Village-owned properties.

In a memo to Council before the Sept. 6 meeting, Salmerón detailed those other projects. He wrote that a solar array at Sutton Farm would help to “deliver on Council’s goal of having a portfolio of 100% renewable energy” and offset the costs of five additional solar projects around Yellow Springs.

Among those are the solar pavilion at the Bryan Center, as well as rooftop arrays at the train station/Chamber of Commerce headquarters, the wastewater treatment facility on Grinnell Road, Gaunt Park Pool and at the now-Village-owned Lawson Place Apartments.

Salmerón did not state how expensive those projects — including the array at Sutton Farm — would be.

According to CEC’s proposal, titled “The Community Solar and Habitat Enhancement Plan,” or CSHEP, the Village aims to build a “fixed-tilt” solar array that would span 7.6 acres on the westernmost parcel of the 27-acre Village-owned land.

As detailed in the CSHEP, all of these natural features would exist symbiotically with the solar array — not only by creating “positive net benefits to native flora, fauna and water quality,” but also by minimizing property maintenance from Village workers.

“This is what the future looks like,” Salmerón said. “Finding ways for technology and nature to coexist. We’ll produce local energy and save some birds, plants and animals.” 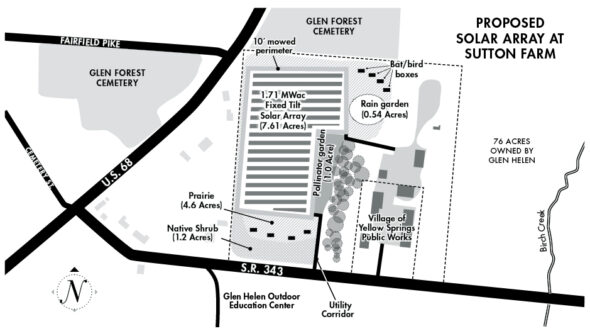 The Village of Yellow Springs recently contracted Columbus-based Civil & Environmental Consultants, Inc., to create a prospective layout of what a solar array might look like at the Village-owned Sutton Farm on State Route 343. In addition to over seven-and-a-half acres of solar panels, the plan also includes natural features such as new prairie, a rain garden and native plantings. This plan, however, may not come to fruition. The land is on a conservation easement that would prohibit the construction of an array. (Map data courtesy of CEC)

All of CEC and the Village’s environmental considerations are in direct response to some of the ecological provisions outlined in Sutton Farm’s conservation easement.

Originally written and deeded in February 1995, and overseen by the Tecumseh Land Trust, the easement ultimately sets out to “preserve and protect the ‘conservation values’ of the property” and “[retain] in perpetuity its present natural/scenic, agricultural and forested condition.”

The conservation easement covers both tracts of the entire Sutton Farm property: the first is owned by the Village and is the 15-acre land being eyed for the solar project. East of that land is the Village Public Works property, which is not covered in the easement. Further eastt is the second tract covered by the conservation easement — 76 acres originally owned by the Village, but purchased by the Glen Helen Association in 2017. In total, the Sutton Farm easement covers 90 acres.

There are a number of prohibited uses on the land protected by Sutton Farm’s conservation easement. The property cannot be subdivided, nor can any building or structure be erected on the land. Any activity that may lead to soil degradation, pollution or erosion is prohibited.

But perhaps most relevant to the Village’s desire to build a solar array is the easement’s provision that states commercial or industrial uses, “other than those relating to agriculture,” are entirely off-limits.

“All of our conservation easements are legally binding documents,” Tecumseh Land Trust Executive Director Michele Burns told the News in a recent interview.

“We are bound to make sure the restrictions in those documents are being upheld,” she said. “That’s our sole mission: to preserve land using conservation easements.”

As Burns explained, any activity that occurs on land overseen by Tecumseh Land Trust by way of a conservation easement must fall within the parameters of the conservation values of the easement. In other words, any permissible activity must essentially improve the natural features of the protected land.

“That’s how the Glen came to own the 75 acres — they wanted to protect the headwaters of Birch Creek,” Burns said. “By taking that land out of agricultural usage and naturalizing the property with habitat revitalization, Glen Helen improved upon the [easement’s] conservation values.”

Burns added that activities “cannot be general environmental values,” but must pertain to any given property’s specific conservation values outlined in an easement.

Amending an easement, Burns said, is something the Tecumseh Land Trust tends to eschew.

According to her, amendments — if written or adopted improperly — could cause the trust to lose its accreditation with the Land Trust Alliance, and open up the trust and the property owners to scrutiny from the IRS.

“As a 501(c)(3) charitable organization,” Burns said, “we are not allowed to do anything that could provide someone with private inurement or any impermissible private benefit as defined by the IRS. If we do that, we could lose our charitable status.”

“Let’s say, for instance, an easement allows for no commercial activity other than agriculture, and somebody asks if they can put up a commercial solar array,” Burns said. “If they use a third party to construct, run or monetarily benefit from the array in any way, then that threatens our status as a charitable organization, and we may become unqualified to hold conservation easements in the future.”

Despite that provision in Sutton Farm’s easement, Salmerón said he believes a solar array could still be built without jeopardizing the local trust.

“We’re a publicly owned utility that aims to create publicly owned power,” Salmerón said in his interview. “Our electric company is owned by the community, by our citizens. There would be no profit built into it — no corporate benefits.”

Salmerón said that while he isn’t intending to pit the Sutton Farm solar array project against the mission of Tecumseh Land Trust, he wants to use the farm in a more productive way.

“Right now, we’re just paying taxes on it,” he said. “TLT needs to find a way to modify or replace the easement with something that can not only protect the land, but also deliver greater value for the community.”

But as Burns believes, the value is in the land itself.

“Sutton Farm is a part of the world’s three percent of prime soil — the very best soil to grow food that requires the least amount of inputs and additives, and that provides the best yields,” Burns said, referring to the land’s potential for future agricultural use. “Plus there’s Birch Creek. The connectivity to the Glen. You put it all together on one property, then you get a real natural treasure.”

Despite their differing views of what Sutton Farm could look like in the future, both Burns and Salmerón said they hope to find common ground in the ongoing conversations.

To date, the Village has yet to approach Tecumseh Land Trust with an amendment request. Such a request would then have to be approved by both the trust’s 17-person board and Village Council.

In the meantime, Salmerón said he will continue his pursuit for more municipal solar.

“I don’t know exactly what the next steps are,” he said. “I don’t want to ruffle TLT’s feathers, but the envelope needs to be pushed. Climate action is at the top of our list of urgent needs.”