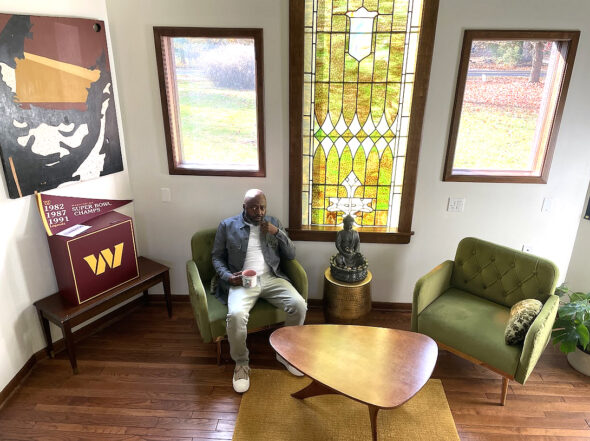 One of Yellow Springs' newest residents, Donell Rawlings, reclined in his new home, into which he moved during the summer. Rawlings says he looks forward to celebrating the holidays there with his family. (Photo by Cheryl Durgans)

Donnell Rawlings is officially a Yellow Springs resident. The stand-up comedian and actor known for his regular appearances on “The Chappelle Show” among other television, film and live performance work officially became a townie after purchasing a home this past summer.

Rawlings said in a recent interview with the News that he’d been coming to Yellow Springs for years to visit his friend and fellow comedian Dave Chappelle.

“When I came, it was usually like one or two days and it was always just connected to the community I knew from Dave Chappelle,” he said.

Rawlings said that he didn’t always appreciate the appeal of living in a small town like Yellow Springs, or why Chappelle chose to live here with his own family.

“It just wasn’t the cool thing to do. Like man, you could be in Beverly Hills, you could be anywhere. Why Ohio? Why Yellow Springs? And then after being here for a while, I got it,” he said.

Rawlings said the COVID-19 pandemic was a catalyst for shifting his thinking about living in the village after he spent the summer of 2020 living here as the pandemic ramped up, doing stand-up as part of Chappelle’s “Summer Camp” comedy line-up of over 50 shows performed outdoors at the Wirrig Pavilion. During that time, Rawlings, a Washington, D.C., native, also became known as the “River Ninja,” coining the phrase, “from the streets to the creeks” after falling in love with kayaking and going on water expeditions down the Little Miami River with production crew from the Summer Camp shows and comedians including Chris Rock and Michael Che.

“I think the pandemic kind of forced us to have different ways of thinking, but I got how simple life could be,” he said.

Rawlings said he’s able to live in Yellow Springs, in part, because of social media.

“It’s such a different scene from when I started 30 years ago. Now with social media, you are able to create your own shows pulling a camera out of your pocket. You don’t have to subscribe to the old school situation of being in New York, LA — where the cost of living is crazy, the quality of life is not as good as this,” he said.

Rawlings also decided to move to Yellow Springs, in part, because his young son, whom he co-parents with actress Stephanie George, lives primarily in large cities — and also loves the town.

Rawlings said he wants his son to grow up with great childhood memories of being with his dad — something Rawlings was unable to experience with his own father.

“It’s kind of cool to know that he’ll remember all of these summers. He’ll know that he used to go to Ohio for Christmas on long breaks, that he fished there,” he said.

Rawlings said the YS community was a draw for him.

“I think the major difference for me is the sense of community, being somewhere where you feel like everybody has your back to a certain extent. As long as you live a decent life, it seems like people are supportive of friendship and camaraderie and getting together,” he said.

Rawlings has already brought people together through organized recreation, including a four-day series of family-friendly community events in and around Yellow Springs called “Donnell Land,” which featured shows at Wiley’s Comedy Club in Dayton, kayaking down the Mad River and a kickball game in Gaunt Park over the Memorial Day holiday weekend last spring. On Oct. 7, Rawlings challenged his neighbor, longtime YS resident Donna Silvert, to a game of pickleball.

At the conclusion of the set — hyped up, “Donnell vs. Donna” — Silvert had soundly defeated Rawlings in front of a lively crowd on the Antioch College tennis courts. Rawlings personally matched all proceeds raised through the event — mainly donations generated from onlookers — as a fundraiser for The 365 Project, Antioch College and Yellow Springs Community Children’s Center. Rawlings also donated a rug to the Children’s Center on the suggestion of a friend.

“I’m like, it’s just a rug. But we walked in [the center] and the way the kids’ faces lit up, the way the teachers lit up, what it represented to them. I just instantly got connected. I want to do something nice for this town,” he said.

“I hadn’t done podcasts in a while. Donna was the first guest on it, and it was a good time to talk to her — I was trying to get people to understand why I connected with her. It wasn’t just trash talk; we discussed her history with the community, the things that she cares about, the way she wants to unify this community,” Rawlings said.

Rawlings is also aware of the changing demographics of the village and potential importance of his presence as a Black person coming from a large city, moving into a community that has seen its African American population drop to about 10.9 percent from around 30 percent in the 1980s.

“My understanding is this community, maybe 40 years ago, was predominantly Black and a large percentage moved away. And you have to ask yourself the question, why? What was uncomfortable? But even in how you deal with that [changing community], the fact is this dude from the city can come here and maybe be a connector, a bridge from the streets to the creeks,” he said.

According to Rawlings, living in Yellow Springs has informed his comedy material. He joked that instead of getting excited about Rodeo Drive in Beverly Hills, he gets a charge of out shopping at the discount retailer Marshall’s.

“When I go in there, I feel sexy knowing that I’m leaving out of there with a reduced red tag. If you want to affect me with a good time, let me get something marked down. I talk about the simplicities, I talk about the experiences I share with my son being in Yellow Springs, I talk about a senior woman who threatened me in a pickleball game,” he said.

Throughout his career, Rawlings has not shied away from making jokes that ride the line of controversy.

“I’ve done some jokes and observations about the LGBTQ+ community, and my older brother’s gay, right? And I got some heat that I was willing to take. It didn’t matter to me because I knew I was speaking my truth,” he said.

However, in the midst of the heat, Rawlings said his brother reached out to him and told Rawlings that he wanted to appear on his podcast.

Rawlings is looking forward to his first Christmas in front of a fireplace in Yellow Springs with his family, especially his son.

“That’s another thing I’m excited about — Christmas and the fireplace. When I was younger, my mom was Muslim, so we didn’t celebrate Christmas, but I remember always going to my grandma’s house. One of the things I always loved during the holiday times was seeing that big tree and the fireplace going, and it just brings back good memories of me growing up, being a kid, and having some good times with my family,” he said.

Rawlings has continued to find pleasure in nature since moving here.

“Whenever I’m here, it’s just so peaceful for me. I could sit on my porch and [enjoy] something as simple as watching deer coming in and out of the yard, watching the squirrels,” he said.

Rawlings’ podcast episode featuring his interview with Donna Silvert will be available Nov. 15, and can be listened to on most streaming platforms.

3 Responses to “Donnell Rawlings finds home in the village”