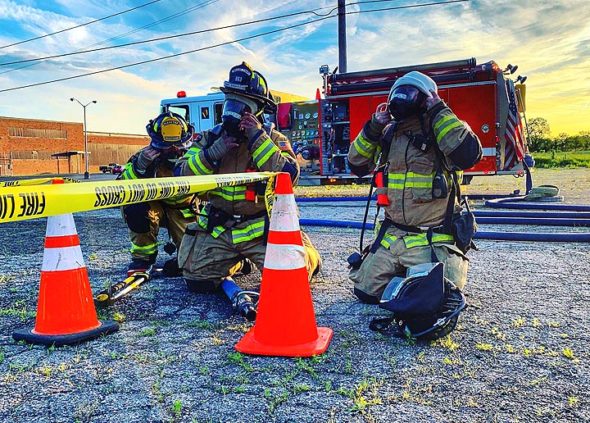 A 3.5-mill continuing levy was passed by voters at the polls in November. It will generate about $670,000 per year for Miami Township Fire-Rescue and will be used to pay MTFR personnel. (News archive photo)

Moir joins board of trustees

Marilan Moir became Miami Township’s first female trustee in recent memory when she took the oath of office on the three-member board in January. Elected in November 2021, Moir’s four-year term began with the start of the new year. The Jan. 5 meeting also marked the beginning of a second term for Don Hollister, who was re-elected this past fall; longtime Trustee Chris Mucher was chosen as chair of the board, with Hollister serving as co-chair.

In June, the Miami Township Board of Trustees voted to approve a resolution of necessity to move forward with placing a 3.5-mill continuing levy on the November ballot. The levy, which was passed by voters at the polls in November, will generate about $670,000 per year for Miami Township Fire-Rescue and will be used to pay MTFR personnel.

After the trustees approved the levy, the Yellow Springs Board of Education penned a letter to the trustees expressing disappointment that plans for the levy were not shared or discussed with the school district and Village government before action was taken, citing a reported agreement between the governmental bodies to do so.

The letter prompted all three governing bodies to agree to hold joint public meetings several times per year or as needed in order to discuss financial and operational issues. Thus far, the joint meetings have been held in October and December.

This year, the Township established a new natural burial site, Oak Grove Cemetery, on 5.8 acres of land behind the Glen Forest Natural Burial Cemetery on U.S. 68. The cemetery will host natural grave sites over which native swamp white oak trees will be planted one year after a natural burial, as well as traditional natural burial plots. The new cemetery, which began selling its oak tree plots in late summer, will hold a total of 600 plots, with 70 of those being oak tree plots.

In November, the Miami Township Board of Trustees held a public hearing to listen to community feedback from residents of Miami Township on large-scale solar installations. The hearing was prompted by an October motion from Trustee Don Hollister requesting that the board write a letter to the Greene County Board of Commissioners recommending that they prohibit the installation of utility-grade solar energy arrays on agricultural land in Miami Township. The county is able to pass a resolution banning 50-megawatt or larger solar farms and wind farms of 5 megawatts or larger on unincorporated agricultural land by way of Senate Bill 52, which was signed into law last year.

After hearing from attendees for and against asking for county action, the trustees declined to make a motion regarding a recommendation to the Greene County Board of Commissioners, citing the need for more information.

In December, the Ohio Power Siting Board, or OPSB, denied the application of Texas-based Vesper Energy to establish the 1,500-acre Kingwood solar project in Greene County. The Kingwood Solar project has been in development since 2017; Vesper Energy told local news outlets that the company aims to challenge the ruling and that it is considering a new application for a smaller project.

In addition to passing a resolution to oppose the project in 2021, the Miami Township Board of Trustees filed to be intervenors in opposition to the project before the OPSB,  citing the “prime soils” on the land planned for solar development and its proximity to Glen Helen, John Bryan State Park and Clifton Gorge as being among its reasons for opposition.

The board is considering the possibility of a joint resolution with Xenia and Cedarville townships in response to Vesper Energy’s intention to challenge the OPSB’s ruling. If Vesper Energy files with the OPSB for a new project that includes Miami Township agricultural land, the Township will have 90 days to petition the County to overrule the application under Senate Bill 52.