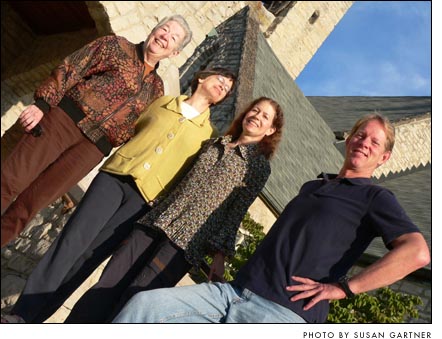 Chamber Music Yellow Springs will launch its 25th year with the Daedelus Quartet on Sunday, Oct. 5, at 7:30 p.m. at the First Presbyterian Church on Xenia Avenue. Pictured above at the church are longtime CMYS organizers, from left, Jane Baker, Mary T. White, Mary Fahrenbruck and Bruce Bradtmiller.

In the world of chamber music, Chamber Music Yellow Springs can play with the big boys.

“When I go to the Chamber Music America Conference [the national association of chamber music presenters and performers], which is held in New York every year,” said CMYS vice president Mary White, “people know about us because we’re a very solid chamber music series. We get very good groups one wouldn’t necessarily expect in a tiny town.”

In the first concert of its 25th season, CMYS presents the Daedalus Quartet with pianist Awadagin Pratt on Sunday, Oct. 5. The concert will take place at the First Presbyterian Church at 7:30 p.m. For more information, visit the Web site at http://www.cmys.org.

How is it possible that a town of 3,700 can share the stage with cities like Cleveland, Chicago, and Toronto and offer an internationally recognized selection of hot new talent that is appreciated by audiences and performers alike?

Yellow Springs might be small in size but it’s mighty in several noteworthy areas — one of them being the concert venue.

“The Presbyterian church is the sort of space that most chamber music historically was written for,” said Bruce Bradtmiller, CMYS past president. “It’s a terrific opportunity to hear the music exactly as it was supposed to be heard. The performers confirm that.”

According to Bradtmiller, many times the performers are locked into a concert series where they play a large auditorium not intended for chamber music. “Chamber musicians are playing chamber music because they like the intimacy.”

Another significant draw for performers and listeners is the type of music that CMYS showcases.

“Different chamber music series have a different focus,” explained Jeff Huntington, CMYS president. “In Cincinnati, for instance, their series is very strong on German and Austrian music, Beethoven and Mozart and all those guys, and that’s all they play. But in Yellow Springs we like to see the interaction between different cultures. [We may feature] a string quartet and the music is written by a Chinese composer or it’s a brass quintet and it’s about music in Haiti. Practically every concert has music from our own time — a piece by a living composer. We do a lot of cross-cultural pieces, but we don’t want to slack off on famous works that everybody expects. So we do both.”

Huntington explains there are certain audiences that are resistant to this — “they only want one kind of music.” Which points to another reason why performers are drawn to Yellow Springs.

“[The artists] like the response they get from our audience,” said Mary Fahrenbruck, a member of the CMYS booking committee. “I hear that over and over again. It’s a very knowledgeable, appreciative audience.”

Then there’s the small-town hospitality.

“What we offer that’s different is Yellow Springs,” said White. “It’s small, [the artists] can walk everywhere, people say ‘hi’ to them on the street, they can get a little bit of a break. It’s not like being stuck in a huge hotel in a big urban environment where getting around is a chore. This is a little like going on a country vacation with a concert thrown in.”

“Our groups have toured all over the world,” said Ruth Bent, a founding member and CMYS past president. “They tell us stories of how they’re treated by other presenters.”

A typical story is that the performers didn’t get picked up at the airport or taken to their hotel, they had to find their own way to the concert hall, and after the concert was over, they received their check and that was that. “Whereas we house them for the weekend and give them a lovely dinner and drive them back and forth to the airport,” she said.

Fellow founding member and CMYS past president Jane Baker initially started the tradition of housing the musicians in her home.

“I did it for the first several years because it was clear that since our fees were modest that was one way we could help out the musicians,” said Baker, who has attended many four-star rehearsals in her living room. “It was a wonderful way to get acquainted with some very interesting people. I was sort of disappointed when other people caught on to the fact that this was not a chore but was actually fun!”

There’s also the CMYS outreach program. Each year, selected performers extend their stay in order to give an additional concert at a local school. Travel costs are a significant portion of the artists’ fee but if the artist is already here, an additional concert is easily negotiable. In November, the Carmina String Quartet will do a workshop at Mills Lawn for the elementary students and in March, the Albers String Trio will do two separate workshops for high school and middle school students.

In addition to all of this, each artist receives a professionally-recorded CD of their performance from SoundSpace, Inc., which is then rebroadcast over WDPR-FM (88.1) and WDPG-FM (89.9). Performances are videotaped by Millard Mier and broadcast on channel 5, the public access cable channel.

This bonanza performance package has been available to CMYS musicians and fans since the beginning 25 years ago.

“A group of us got together at the urging of musicians from the Cincinnati Symphony who had come to play at a series of concerts at Antioch,” said Baker, recalling the group’s humble beginnings. “When Antioch professor Bob Turoff, who had organized those concerts, left town, the musicians said to us, ‘This is the best audience we’ve ever played for. Please find another [YS venue] for us to play.’ They offered to play for free because they liked our audience so much.”

Through it all, the group’s mission has remained the same: to attract and support the younger, up-and-coming groups who are making a name for themselves rather than the big-name, established groups who have been at it for 20-plus years.

“That’s partly a matter of finances,” said Bent, “but mostly a matter of emphasis. We like to think that we’re a place that helps to get the artists on their way.”

As members of the booking committee, Bradtmiller, Huntington, Fahrenbruck, Bent, and Baker weed through the stacks of marketing packets, photos, and CDs sent by the various performers or their agents and then plan who is going to be featured in the next year’s chamber music series. It’s a process of winnowing, debating, selecting and negotiating with schedules, fees, and travel expenses in order to maintain a high caliber of performers yet stay within budget.

“That’s always a matter of give and take,” said Bent. “We certainly don’t want to offer a price that is too low for the artists to make a living. On the other hand, we’re not rich enough to pay what other series can pay with absolute top headliners.”

Each year the series culminates in the Annual Competition for Emerging Professional Ensembles. Two outstanding ensembles are chosen by first-round judges and compete for $5,000 in prize money. Winners often go on to achieve national and international success. The point of the competition is to help launch these young groups so that the winner will have a slight edge over their peers in getting necessary recognition and more performance opportunities.

“We’re a recognized concert series that is doing something important by way of our competition and have been doing it for a very long time,” said White. “It blows me away that we do what we do in this town. It’s put us on the map internationally for chamber music.”

The longevity of the competition has created an unusual problem for CMYS first-round judges and competition staff.

“In my 10 years of being associated with the competition,” said White, “the quality of these groups has dramatically increased. Now it is getting harder to choose our finalists as so many groups are playing at extraordinarily high levels. The quality of the competition is at least as exciting as our regular concerts.”

For the 69 CMYS volunteers (there is no paid staff), their reward comes from the performers who ask, “When can we come back?”