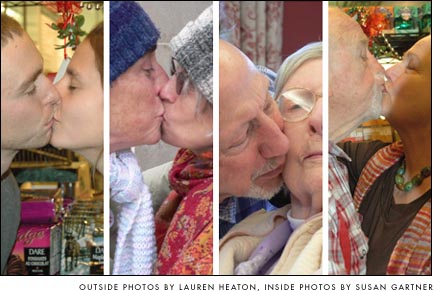 Many villagers took part last Saturday in “The Kiss,” a performance art piece by local artist Nancy Mellon that was part of the Yellow Springs Holiday Festival. As conceived by Mellon, at 3:07 p.m. Saturday 80 couples — romantic, familial, or other — kissed at one of many kissing stations around town. Shown above are, from left, Ryan Berning and Emma Robinow at Current Cuisine, Moya Shea and Marianne MacQueen, Ed and Nancy Vernot at Friends Care Extended Living Center, and Leon Holster and Flo Lorenz, also at Current.

Years from now, as they look back on the event, residents and visitors to Yellow Springs might not remember the exact date or year, but they’ll remember the time.

At least, that’s when the official kissing began.

Some of the participants felt the need to practice beforehand. Some brought cameras and did practice runs, attempting to kiss their mistletoe mate and take a picture simultaneously. Some enlisted the aid of a friendly passerby (to help with the camera, not the kissing). Some brought a cuddle consort, camera and camera operator just to cover all bases.

“The Kiss,” a performance art piece conceived by local artist Nancy Mellon and sponsored by the Yellow Springs Chamber of Commerce, was just one of many offerings during the Yellow Springs Holiday Festival on Saturday, Dec. 6. At 9 a.m., cocoa and donuts were served at the Yellow Springs Federal Credit Union while holiday shoppers bought decorations, cards, and baked goods at Friends Care Community’s Annual Holiday Bazaar. As residents and visitors were sitting down to Breakfast with Santa at the Methodist Church, others were taking a historic tour of the village by local historian Nancy Noonan.

The lip-locking lollapalooza was created to attract people to Yellow Springs for holiday shopping and seasonal celebrating. Initially, 80 sprigs of mistletoe were hung in and around downtown stores. “Kiss Here” signs, handwritten by local artist and calligrapher Ann Bain, were displayed in participating store windows and a map was compiled to keep track of all the “kissing stations.”

But to ensure that people actually would notice the mistletoe and respond accordingly, the idea was hatched to orchestrate a simultaneous kiss by 80 couples at precisely 3:07 p.m. on Dec. 6. “Kiss stickers” would be handed out to all participants (similar to the “I Voted” stickers passed out on election day) and a photo was requested that would become part of a slideshow on the Jafagirls (http://jafagirlart.blogspot.com) and Yellow Springs Arts Council (http://ysarts.blogspot.com) Web sites.

“We’ve had all kinds of theories,” said artist and “elf helper” Corrine Bayraktaroglu. One theory is that the time was selected to commemorate the attack on Pearl Harbor (Dec. 7, 1941) and the classic 1945 photo by Alfred Eisenstaedt of the returning soldier kissing a nurse in Times Square.

“My favorite theory is that there are 307 steps if you go to every single kissing station,” said Mellon. Although she appreciates the ingenuity of all the stories, the reality behind the idea is much less dramatic.

“I was thinking three o’clock,” said Mellon, who had been casually tossing out ideas with her husband, Steve, “and he just looked at me and said [in an ardent voice], ‘Three…oh…seven.’ ”

When the call for kissers first went out, Bayraktaroglu said quite a number of respondents claimed that they were without a romantic partner. The idea was then broadened to include children, parents, stuffed animals, or pets.

A notice was published in the Yellow Springs News giving contact info and asking interested persons to meet on the steps of the First Presbyterian Church at 2:30 p.m. to “synchronize watches, receive kiss station assignments, locate the assigned station and be ready to kiss at exactly 3:07 p.m.”

With only two weeks to plan the event, Mellon and Bayraktaroglu became concerned that the big wet one would be a big wipe out. The town did not disappoint.

“The day before [the event], we had 40 couples,” said Mellon, “and I came home from working at Village Artisans to a slew of phone messages. That’s when I started to think, ‘Wow, this could really happen.’ People dropped info off in mailboxes or sent out e-mails to their friends.” Requests came in from people who wanted to participate but were going to be out of town. “People in Nevada, in Columbus — they’re going to kiss at 3:07 and send us pictures,” she added.

The morning of Dec. 6, Mellon was still getting phone calls as she dashed about downtown, making last minute preparations. “It was a blur,” said Mellon, recalling the large crowd that gathered at the church steps at 2:30 p.m. “Corrine and I were assigning kiss stations and giving out chocolate kisses and kiss stickers and info about where participants could send their photos.”

After making sure everyone was clear about their assignments, Mellon stationed herself at Asian Collection while Bayraktaroglu stood guard between Downing’s Do It Best Hardware and Tom’s Market.

Then, at 3:07 p.m. according to her cell phone, Bayraktaroglu blew her whistle.

Nervous laughter and whoops could be heard all over downtown.

“We stood right inside the door at Dark Star,” said Gail Cyan of the cuddle she shared with her spouse, Lisa. “It was fun to see all the participants running to their kissing stations.” Daughter Sophia Davidson took their picture.

Sue Brezine was happy that husband, Don, had recovered sufficiently from a recent cold so they could kiss at Village Artisans, where she was working. Nancy and Ed Vernot kissed at Friends Care Community and Alice McKinney nuzzled Arthur (a teddy bear) under the Knit Knot Tree. Joanne Caputo and Michael Fleishman kissed inside Ohio Silver, then came outside and kissed their son, Max, in front of Kismet.

Outside of Tom’s Market, 11-year-old Evelyn Greene stood on a bench for maximum full facial contact with her mother, Talitha, as Rick and Mary Donahoe laughed and kissed a few feet away. Across the street inside Current Cuisine, Flo Lorenz kissed her husband, Leon Holster, while Current Cuisine employee Emma Robinow took a moment off from serving customers to kiss her boyfriend, Ryan Berning.

“One coworker was holding the mistletoe above us,” said Berning. “Everyone in the store stopped and watched. We enjoyed it a lot!”

Afterwards, Mellon was exhausted but happy with the final outcome. “It needed to be in Yellow Springs for it to work,” she said.

Flo Lorenz made the suggestion that next year the Presbyterian Church bell be called into service to help synchronize the smooch.

“I think it should be a tradition,” she said.

The mistletoe will be up the entire month of December and kissing is encouraged. Send photos to jafagirlart@yahoo.com.