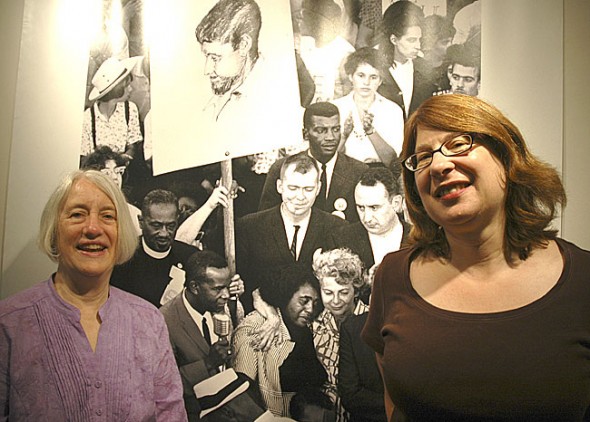 Antioch College Morgan Fellows Anne Bohlen, left, and Jean Gregorek designed a series of events at the college this summer in honor of the historic civil rights events of Freedom Summer, 1964. The next event on Wednesday, July 28, features the Academy-Award nominated documentary Freedom On My Mind. The events take place at 7:30 p.m. at Herndon Gallery on the Antioch campus.

Reflecting the historic Antioch College emphasis on social justice, the revived Antioch College is sponsoring a series of events this summer focusing on the civil rights movement, especially Freedom Summer in 1964.

Beginning with “Oh Freedom Over Me,” an exhibit of photos, documentary films and music from Duke University, the series includes several films and speakers. The events, which run weekly on Wednesday and Thursday evenings, take place at the Herndon Gallery on campus.

Beginning with Horace Mann’s visionary decision to open the college to black students in 1853, Antioch College sustained a focus on racial equality through the years. Efforts in pursuit of equality included the recruiting of minority students in the 1940s and ’50s, including the future Coretta Scott King, from the South, and providing students co-op opportunities to work for the Student Nonviolent Coordinating Committee in the South at the height of the civil rights movement. Many Antioch College students also took part in Freedom Summer in 1964, when college students went to Mississippi to help register black voters.

“I think this is the most distinctive part of our history, some of the bravest stances taken,” said Jean Gregorek, an Antioch College Morgan Fellow who is co-organizer of this summer’s events. “We need to build on it, to learn from it, celebrate it and put it front and center. Our values and ideals were noble, and I don’t want them to be forgotten.”

For organizer Anne Bohlen, also a Morgan Fellow, the series is a valuable reminder that the racism and fear that led to the oppression of African Americans and other minorities has not gone away, and can be seen in current controversies such as immigration and some of the rhetoric of the Tea Party movement.

“I see a lot of it coming back up,” she said. “It makes me want to get people on board, especially young people.”

Both Bohlen and Gregorek have been troubled by how many young people today seem only vaguely aware of the struggles of the civil rights movement. But that time in history has a great deal to teach young people, the women believe, and they hope to attract people of all ages to the events.

Framing the series of events is “Oh Freedom Over Me,” the multimedia traveling exhibit from Duke’s Center for Documentary Studies. Giant photos from Freedom Summer line the walls of the Herndon Gallery, including portraits of civil rights leaders such as Robert Moses, crowds marching and singing, and people grieving over the death of Mickey Schwerner, one of the three young civil rights workers killed that summer. Schwerner was the brother of former longtime villager Steve Schwerner.

The exhibit also includes recordings of speeches by Martin Luther King, Jr., and the documentary Freedom on my Mind, along with a look at local civil rights efforts around integrating the barbershop of Lewis Gegner.

Last week, the series featured “Letters Home from Freedom Summer,” with Yellow Springs young people reading letters written by some of the young people who took part in the effort.

On Wednesday, July 21, at 7:30 p.m. at Herndon, the series continues with The Untold Story of Emmett Louis Till, a 2005 documentary about the murder of the 14-year-old Till as told by first-hand witnesses.

On Wednesday, July 28, Freedom on My Mind, an Academy-Award nominated documentary that interviews many of the Freedom Summer participants, will be shown.

On Wednesday, Aug. 4, the feature film In the Heat of the Night, with Rod Steiger will be shown. A discussion about the repercussions of the civil rights movement in Hollywood will be led by Dr. Dan Shoemaker, an Antioch alum and professor of American Studies at Bowling Green State University.

The series continues on Thursday, Aug. 12, at 7:30 p.m. in Herndon Gallery with footage from “What We Want, What We Believe: The Black Panther Party Library.” Ohio State University Professor Hasan Kwame Jeffries will introduce newsreel footage and discuss the history and goals of the Black Panther party.

On Wednesday, Aug. 18, the film series ends with Let Freedom Sing: How Music Inspired the Civil Rights Movement, a 2009 documentary that focuses on the centrality of music to the civil rights movement. The film features 29 musical performances, including those of Gladys Knight and Pete Seeger.

Several events in the fall are also being planned, including a talk by Antioch alum Larry Rubin, who took part in Freedom Summer, and a talk by Michele Alexander, who wrote The New Jim Crow, a book about how current day incarceration of black men affects the African-American community.

Overall, the college hopes to not only bring back memories of these important events, but to spark discussion that can help people go forward, according to Gregorek.

“The civil rights movement is often talked about as a simplistic story of heroes and villains,” she said. “But that’s too easy. We need to look closely at these events. We hope we’ll stimulate interest and further investigation into this history.”