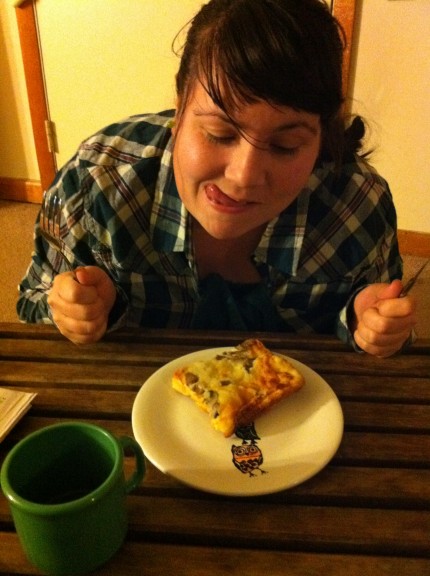 The perfect food has two homes in Yellow Springs.

How lucky am I, then, to have moved to a village with two whole pizza places, both locally-owned, both virtually within 20 paces of one another? I can’t speak for the townies, but as a YS newbie, I have to view the location decision of the newer of these pizza joints as something of a challenge to the other; then again, in a village this size, I’m not sure the strategy would be much different if they’d opened up shop at the other end of town.

In  my hometown in northwest Florida, the local pizza joint is something of a distant memory. The closest local place to my family’s home that I can think of is “across the bridge,” a phrase that marks the dividing point between the city and the beach. These are two distinct communities: the former, where my parents live, is inhabited by god-fearing suburbanites, and the latter by shameless spring-breakers. It is only the tourists who seem willing to open their wallets to a business not bearing a registered trademark symbol after its name. There is something, I think, disingenuous about this sort of culinary tourism; why is it okay to seek out and support small businesses when you’re on vacations, but not okay in one’s own hometown? “Local flavor” is still local, and flavorful, down the street from your doorstep.

Nevertheless, the pizza places in the city are chain restaurants, located more often than not in strip malls. I’ve always been under the impression that strip malls existed to bring more traffic to the businesses therein, but apparently the proprietors of pizza still feel it necessary to take it up the proverbial notch. Glance down the sidewalks of any given drag, and you’ll see them: teenagers holding signs hawking cheap pizza, headphones clogging their ear canals, shifting their weight, their expressions indicating they have just discovered the cruelty of minimum wage. 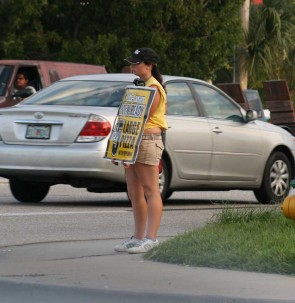 Pizza is a notable exception to the common aversion to purchasing things advertised on cardboard signs by the road. (Photo by Willie Lunchmeat)

This particular job, in my opinion, ranks high on a personal list of “worsts,” and in the heavy summer heat, is a very special form of torture. Several summers ago, I worked at a new coffee shop on the beach, and the owner had my best friend make a giant coffee cup suit, to match the shop’s logo, to be worn out near the busy street. Most similar jobs involve waving, but this particular suit, a masterpiece in its own right, had no logical place for armholes, and was thus a glorified straight jacket. You could only wear it and sort of bob back and forth, sweating away the minutes on the time clock, hoping you didn’t fall down, or else you’d be down there until someone noticed you. I’ve often wondered if this was effective marketing: I guess I would almost have to go into a business out of pity if I saw its mascot writhing on the pavement, not able to right itself.

Inclement weather and inadequate compensation aside, I guess I just don’t understand why it’s necessary to hold pizza signs. Isn’t pizza good enough on its own? Doesn’t everyone love pizza? This stuff should sell itself.

Which is kind of what it does in Yellow Springs. If you stand on the corner of Xenia Avenue and Corry Street on a warm, breezy day, you’re liable to get caught up in what I like to refer to as “The Pizza Vortex.” Because of the dangerous proximity of both of the village’s pizzerias, the delicious smells that emanate from each have the power to meet somewhere in the middle of Xenia Avenue, at which point they join forces, creating a cyclone of aroma that renders anyone within a block’s smelling radius helpless to its whim. Encounter The Pizza Vortex, and you must have pizza. It’s as simple as that.

I would like to imagine that both restaurants, though vying separately for their own client base, intentionally got together and hatched this particular scheme, as it does both businesses an equal amount of good: once you are drawn into The Pizza Vortex, the pizza is a given, but at which place is still left for you to decide.

I do have a favorite of the two places, but I shan’t proselytize. What I will say is this: no matter which you choose, you can be assured that what you’re getting is not only made in this village, but supports this village, and that, with any luck, your sidewalks will remain signless, your teenagers earbud-free, the smell of your favorite food always a block away.