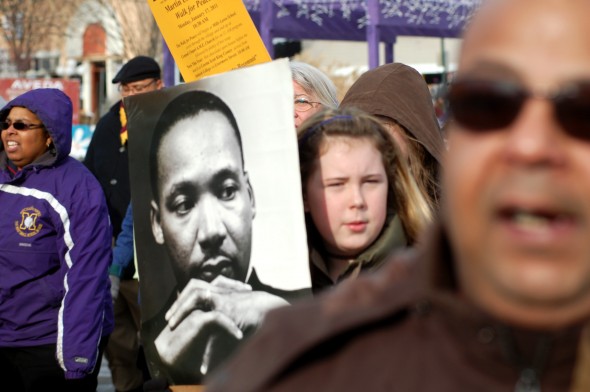 The streets of Yellow Springs echoed with the sounds of the civil rights movement Monday morning. Admirers of Martin Luther King Jr. chanted “We Shall Overcome” as they marched through the streets; a jovial tribute to one of the most iconic and important figures in American history. Upon the crowd’s arrival at the Central Chapel AME Church, the emcee of the event declared it the biggest turnout for any Martin Luther King Jr. Day parade yet.

Ronald Reagan declared Martin Luther King Jr. Day a national holiday in 1983, and now the country celebrates it on the third Monday of January (King’s birthday being the 15th). Unfortunately, not every state was thrilled to celebrate initially, and only as recently as 2000 has every state begun to officially honor the holiday.

While Martin Luther King Jr. was not the singular figurehead of the civil rights movement, he was certainly the most unifying in his approach. His passion for nonviolence and civil discourse expressed itself in numerous historic marches and sit-ins to protest the injustice of segregation in America.

The reverend’s life was cut short by an assassin’s bullet, but one can only imagine what he would think about the state of our country today. Would he be overjoyed by the progress we have obtained? Disappointed in the racial problems we still face? It gives me goosebumps to imagine if he were still alive to see our current president, an African-American man, take the oath of office two years ago. Surely he would have seen that as a triumph for equal rights in the United States.