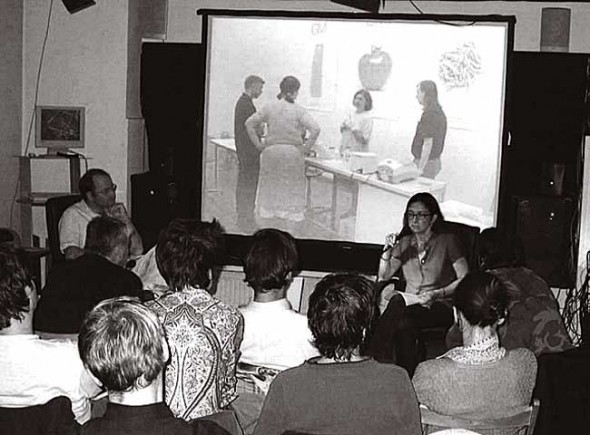 Brian Holmes and Claire Pentecost present a program on their efforts to seek progressive arts organizations in small towns. They will visit Nonstop this Friday, March 25, at 7 p.m. (Submitted photo)

What is the role of a progressive, artistic and cultural organization in a small town? Are there sufficient resources in a village, and specifically this village, to support such an endeavor? And does being an arts town mean just producing art, or also encouraging the questioning of and critical thinking about the dominant culture that artists tend to provide?

Such questions will be among those considered this weekend by members of the Nonstop Institute and their visitors, who call themselves the Midwest Radical Cultural Corridor. The visiting group, which includes cultural theorist Brian Holmes and photographer Claire Pentecost of Chicago, will present their experiences traveling to like-minded progressive organizations in Midwestern small towns on Friday, March 25, at 7 p.m. at the Nonstop Institute. The cost of the event is $5, and the public is invited.

In 2008 the Midwest Radical Cultural Corridor sponsored a “traveling seminar” through towns, cities and villages in Illinois and Wisconsin. “We wanted to find radical culture in a meshwork of locally rooted initiatives. We will be offering some reflections and questions about our ongoing project examining the various interlocking scales of our existence: the intimate, the urban/rural, the national, continental and global,” Pentecost said in a recent e-mail.

When group members attended a higher education conference in Minneapolis several years ago, they met members of Nonstop, and heard the story of that group’s continuing Antioch College traditions even without the campus.

“The story was very inspiring, because we think you have to make culture because you love it and feel it’s an existential and political necessity,” Pentecost wrote.

Central to the weekend event will be consideration of the current status and future of Nonstop, according to Nonstop member Chris Hill. Begun by former Antioch College faculty members as the Nonstop Liberal Arts Institute when the college closed in 2008, the group continued the traditions and legacy of the college by offering classes in village venues after the campus closed. At that point, Nonstop was financially supported by the alumni-supported College Revival Fund.

When the CRF stopped its funding and the college re-opened in the fall of 2009, Nonstop members morphed into a new entity, focusing on offering artistic and cultural events.

In the past two years, the group has focused on offering not only arts events, such as sponsoring artists-in-residence, but also events that provide information on topics of both local and national interest, such as higher education and health care.

“I think Nonstop has the potential to be a powerful cultural resource in Yellow Springs,” Hill said.

However, funding is a continual struggle, made more difficult by the current economy and state funding cuts — at the least, the organization requires about $15,000 yearly to pay utilities and rent at its Millsworks location, plus a modest amount for programming. And beyond that, does Nonstop provide something that villagers want?

“The central question is, is this a need for people living in Yellow Springs?” Hill said.

Nonstop members hope they do fill a need. For Antioch College to survive and thrive, there needs to be a “critical mass” of cultural happenings in town, to attract needed faculty and students, Hill believes. And in a survey she conducted of local artists, Hill found that the artists want “some challenging arts to be brought in.”

“To the degree that Yellow Springs sees itself as an arts or educational village, it’s important to know that people at the heart of that want to be challenged,” she said.

One solution may be for like-minded groups in small towns to network with, and support one another, which is one of the purposes of the Midwest Radical Cultural Corridor group.

“A large part of the idea is to connect regional points in a network,” Pentecost wrote in an e-mail. “What we’ve found in our exploration of the territory is that there are all kinds of endeavors to create alternative culture and even production (farms and cooperatives for instance) that root themselves deeply in the local but with an awareness of how they are implicated in larger scales of existence, from the regional to the global.”