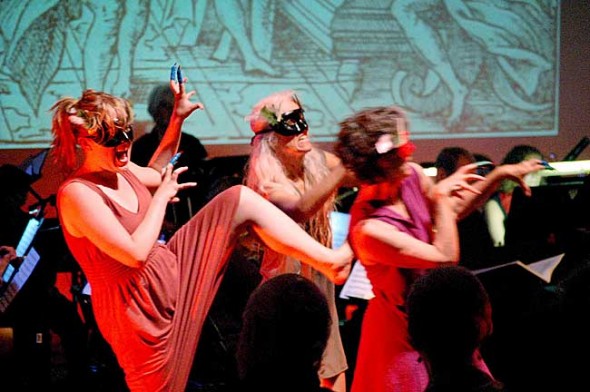 Demons (from left, Amelia Tarpey, Ali Thomas and Jill Becker danced in Hades during Sunday’s performance of Orfeo ed Euridice, which was organized by conductor James Johnston in honor of the rebirth of Antioch College. (Photo by Aaron Zaremsky)

To have loved and lost is better than the usual alternative, but not quite as good as to have loved, lost and then regained love again — at least according to both 18th century composer Willibald Gluck and the leaders of Antioch College. Gluck’s opera Orfeo ed Euridice, which was performed by the Yellow Springs community on Sunday, is the story of love lost and regained, much like the college was lost and then recently, after much perserverence and dedication, regained.

The performance took place in Antioch’s South gym, the first large group multimedia production that has taken place on campus since the college closed in 2008. It was dedicated to Antioch College.

A tribute to the scholarship and community that Antioch has modeled since its inception, Sunday’s concert provided a multidisciplinary venue for virtuosic vocalists, visual art, dancers, Greek literature, instrumentalists and a chorus to share an evening almost unprecedented in a town as small as Yellow Springs. While about 70 people collaborated as performers, choreographers, technicians, publicists, and producers to make the opera stand up, conductor James Johnston, who is effectively the music director of the village of Yellow Springs, made it gleam.

Based on the Greek myth of Orpheus and Euridice, the opera begins at the death of Orfeo’s bride Euridice, sung by guest soloists Peter van de Graaff and his real-life wife Kathleen, who have performed with professional orchestras in Chicago, Houston, Milwaulkee, Budapest, Prague and Krakow. Devastated by his loss, Orfeo is visited by Amore, or love, sung by local resident Jennifer Gilchrist, who offers him a chance to retrieve Euridice on condition that he promise not to look at her until they reach the upper world.

Orfeo charms the gate keepers of the Underworld with the power of his lute and descends to find Euridice and the Elysian Fields, where dancers Elise, Erin Turner, Amelia Tarpey, Ali Thomas, all led by former Antioch College dance professor Jill Becker, sweep across stage brushing the air with silky veils. On their ascent, Euridice does not understand why Orfeo will not look at her, and driven by love, he turns to gaze at her, only to see her fall away into the blackness.

While the Greeks would maintain the tragedy in their story, Gluck preferred a brighter end. Enter Amore, who, touched by Orfeo’s love, awakens Euridice for the lovers’ final reunion. The turn serves well to represent the college’s own odyssey of decline and rebirth, one which is still in the making and full of potential and hope, according to Johnston.

As he does with most of the musical productions that occur in the village, Johnston, who conducts the local orchestra, the local band, the mandolin orchestra, the chorus and is music director of the First Presbyterian Church and former director of the Antioch College music department, conceived of performing Orfeo ed Euridice for the college over the winter. Without a budget to speak of for this scale production, both the Italian libretto and the music for each voice and instrument needed to be electronically transcribed from the score, which Johnston spent a solid two weeks doing, before beginning weekly rehearsals with both the orchestra and the chorus in February. Johnston also has personal connections from his conducting post at Indiana University with the van de Graaffs, who were also supported by a modest Yellow Springs Community Foundation grant.

But much like Orfeo’s lute, the power of the event was the connection between performers and audience members who were united by music. Johnson’s willingness to give hundreds of volunteer hours for such a production are perhaps due to his own musical spell, which many others he knows in the music world exhibit quite regularly. While studying violin in Boston, Johnston heard stories from people who gladly suffered the unpredictability of longtime Boston Opera Company Conductor Sarah Caldwell because of her ability to create musical productions that astound and exhilarate. And here in Yellow Springs, music lovers, such as one chorus member in tender health, keep coming to rehearsals because the music makes them feel good, Johnston said.

“There is so much positive energy that comes out of this, and it’s really just a function of the music,” he said. “It can’t help but elevate, lift.”

Music that’s made by the community of Yellow Springs could even be powerful enough to help elevate its beloved college, too.