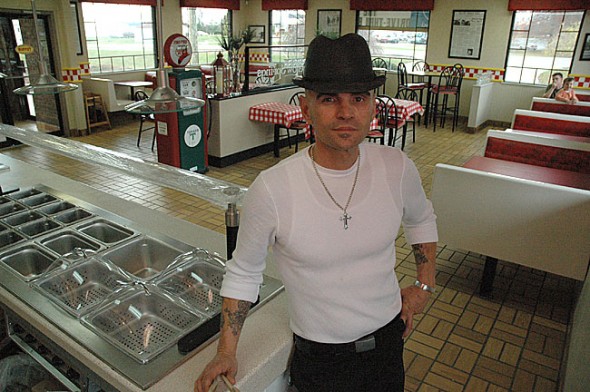 Believe it or not, the daily lunch buffet at the Kentucky Fried Chicken on South Xenia Avenue was crowded with diners for 20 years. The successful family-owned restaurant only closed in 2008 when the corporation demanded a $300,000 upgrade to the building, owned by Bellbrook residents and fast food franchisers Don and Joan Bowling.

Fried chicken is the star once again of a buffet restaurant to open at the former KFC building, which was briefly home to CJ’s Southern Cooking after idling two years. But this time the Bowlings will go the non-corporate route and source some ingredients locally, prepare food from scratch and prioritize quality over cost.

“We’ll have homemade recipes, not food dumped out of a can,” Don Bowling said last week.

The Drive-Thru Buffet, at 1535 South Xenia Avenue, opens at the end of the month. The vegetarian-friendly, diverse spread at the daily lunch and dinner buffets may include — in addition to the southern-fried staple — fried green tomatoes, fish, spaghetti, turkey and dressing, pulled pork, stuffed peppers, cabbage rolls, meatloaf, potato and macaroni salads, coleslaw, vegetable salads and even a dish from India.

Bowling, tired of corporate pressure to use pre-cut, pre-packaged, pre-flavored foods, looks forward to finally running a restaurant his way. Though the prices will still be affordable and the drive-through open for takeout, cost-cutting is not the main goal.

“We’re not going to try to get to a $5 buffet. We’re looking for a one-of-a-kind taste,” Bowling said, adding the buffet will cost somewhere under $10.

Last week the restaurant’s manager, Michael Randall, continued to hone the dining room’s retro look — he was busy repairing a set of drive-in speakers to pipe the ’50s jukebox music into the vestibule. He had recently stenciled a Yellow Springs sign for the dining room, plastered up archive prints of Yellow Springs News papers and photos and installed a red-and-white tiled buffet.

In addition to re-modeling the space, Randall, who is the brother of Joan Bowling, will run the day-to-day operations at the restaurant, under a simple guiding philosophy:

“Make sure the customer’s happy, the employees are doing their job, and the food’s fresh,” Randall said.

The Kettering native brings experience in decorating and design to the task of refurbishing a space that hasn’t been significantly updated in 30 years. Randall silkscreened for Quicksilver when the clothing retailer was still operating out of a California garage. And he helped a friend in New York City convert 1940s beauty salons and pharmacies into popular cocktail lounges.

At the urging of Joan Bowling, the restaurant’s bathrooms were first to be upgraded and beautified, Randall said. She also suggested a custom-built, tiled dessert bar, which will feature Joan Bowling’s fresh, from-scratch pies and other sweets.

Ideas are plentiful as the new restaurant takes shape. The restaurant may cater, deliver large orders and rent out its space for parties. They might serve ice cream. Frank Sinatra, Johnny Cash and Red Foley tunes may stream from the jukebox. But as Don Bowling knows, good, standard recipes are the key to success.

Perhaps the most important recipe is for the fried chicken batter, Bowling said. He acquired Colonel Sanders’ original 1960s batter recipe of “11 herbs and spices” and can legally use it, he said, since it’s not KFC’s current recipe.

The Bowlings, who have franchised fast food restaurants for 34 years, opened their Kentucky Fried Chicken in Yellow Springs in 1988. Don Bowling is looking forward to re-booting his restaurant in a space that holds many memories.

“I have a lot of sentimental feelings of this place and this town,” Bowling said. He remembers delivering lunchtime orders to Vernay Laboratories employees and watching his children play in the back store room. He fondly recalls the surprised look on customers’ faces when they would see a child’s hand reach over the counter to deliver the butter and honey for their biscuits.