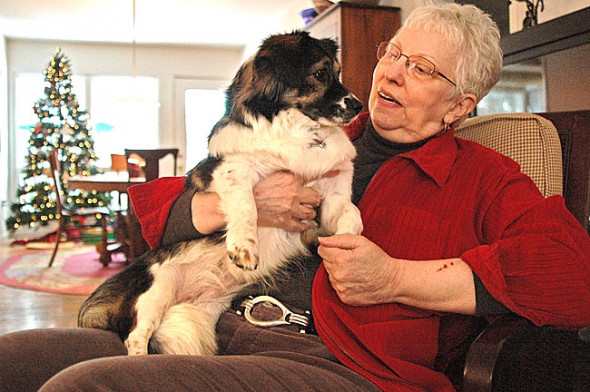 Diane Davis is trying to raise $2,500 for surgery for her certified therapy Sheltie/Corgi mix, Raskel, who has a congenital malformation in her leg that makes walking painful. (Photo by Diane Chiddister)

A therapy dog in need of some help

Diane Davis has a sweet spot for all dogs, but she sees something special in Raskel, a 3-year-old Sheltie/Corgi mix. Specifically, Raskel seems to have a unique affinity for people, which became evident after Raskel received “high marks” in her recent training for certification as a therapy dog.

Davis was training Raskel to take the place of Alex, Davis’ golden retriever, who visits a local hospital, mental health unit and elementary school as a therapy dog each week. Alex has excelled at his task, but he’s getting old and tired, and Raskel, who Davis rescued this summer from the Clark County Humane Society, seemed a natural to take over his duties.

But recently Davis discovered that her dog has a congenital malformation on her left knee, which causes pain and lameness. Consequently, Raskel can’t walk on slippery hospital floors like other dogs, unless she has an operation that is estimated to cost $2,500. Because Davis doesn’t have that kind of money, she’s appealing to the community for donations. She believes that, if Raskel has the chance, the dog could bring joy and healing to countless humans.

“She is beautiful, gentle, intelligent and loves all creatures great and small,” Davis wrote in an email.

Davis appreciates the joy that dogs can bring humans, having started taking her dogs to Friends Care Center to interact with the residents more than 15 years ago. After Friends added their own two dogs, it was no longer safe to bring in outside animals, so Davis found other destinations for her therapy dogs. Retired as a mental health counselor, she now takes Alex three times a week to Sycamore Hospital, the Kettering Behavioral Health Center and Enon Elementary School.

Davis has witnessed countless encounters between humans and canines that appeared to be healing for those with mental or physical challenges.

“I love seeing the magic a therapy dog can do for someone who’e hurting or depressed or lonely,” Davis said. “It’s very gratifying.”

While therapy dogs bring pleasure to the old and the sick, they seem especially effective with those who suffer from mental illness, Davis believes.

“People in mental health units tend to be more isolated and cut off from others than those in a hospital,” she said. “The dogs come in with no agenda. They’re just there to love you, to be your friend.”

When Davis takes her dog for a visit to the hospital or mental health unit, she starts by asking staff which patients might benefit from a visit. And when her dog makes a beeline to someone, Davis tends to trust that that person needs attention, as she believes dogs have an instinct for people who are suffering.

When she and her therapy dog — the two are trained as a team — visit a hospital or unit they don’t talk about potentially controversial subjects such as religion or politics, nor does Davis do counseling. Rather, the visit is centered around the patient’s interaction with the dog, “and what the dog brings to the situation,” she said.

Raskel received the highest marks possible during her therapy training this fall, which includes putting the animals in a variety of stressful situations to make sure they respond calmly. But the dog’s own life has been anything but calm, as she spent her first two and a half years chained in a Clark County backyard until the Clark County Humane Society stepped in. Raskel was then sent to a dog-training program at the Allen County Prison in Lima, Ohio, in which select prisoners train the dogs. Davis encountered Raskel at Petsmart during a special adoption day, and Davis, who said she tries to ignore the dogs up for adoption because she already has too many animals, fell in love immediately.

However, after the therapy training, it became clear that Raskel was in pain, and veterinarian Kelly Young tried two small surgeries to address the leg malformation. But neither worked, and the vet said the more expensive surgery was the only way for Raskel to live a normal life.

Thanks to a generous donor, Raskel does have a new Roadster — it looks like a baby stroller, only with the image of a paw on front — so that she can be wheeled into hospital wards to make her visits. But Davis hopes she will be able to have the surgery so that she can run and frolic and have a normal life. Those interested in helping may donate to The Raskel Fund at the Yellow Springs Federal Credit Union. (Signatories of the fund are Davis and Yellow Springs Mayor Dave Foubert) or call Davis at 767-2308 or dianedavis1335@gmail.com.