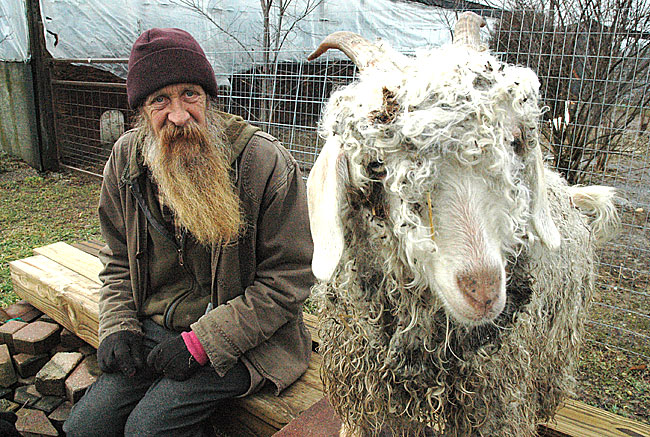 Nick Ormes cares for abandoned and neglected animals at the Ranch Menagerie Animal Sactuary on Village-owned property on US 68. He’s hoping to raise more money to feed his 73 animals through the winter and to raise awarness about the epidemic of stray, abandoned, neglected and abused animals. (Photo by Megan Bachman)

Nick Ormes can rattle off from memory the animals he looks after on his 12-acre animal sanctuary on US 68. There are 20 cats, 15 chickens, 11 ducks, six dogs, six sheep, five goats, four pot-bellied pigs, two turkeys, one mule and one goose. Abandoned or neglected by their owners, these animals faced a life of suffering or the slaughterhouse until Ormes, 58, stepped in to save them.

“They all get to be animals,” Ormes said last week, watching his goats graze on weeds, dogs dig for critters, cats nestle in wool-lined boxes, and pigs snore in hay-filled sheds. Now, especially during winter months when he relies heavily on feed, Ormes explores creative ways to sustain his Ranch Menagerie Animal Sanctuary, located on Village-owned land on the former site of Stutzman’s Nursery.

Ormes, who already sells catnip and antiques to raise money for the sanctuary, relies on donations of food, and has volunteers to help watch the animals around the clock, said he now hopes to go off-grid, grow hay for feed on site, and solicit more in-kind and cash donations from the community to keep his animals safe and happy.

After working at or seeing feedlots and meat packing facilities that “smelled like death,” Ormes decided to dedicate his life to caring for animals.

“It wasn’t like grandpa’s farm, where animals are at least treated with respect before they were harvested,” said Ormes, also a commercial painter.

Ormes started Ranch Menagerie as a nonprofit in 2008 after helping Gary Stutzman care for “owner-surrendered” animals on the property for three years. He later rescued some animals Stutzman left behind when he left the property, including two blind pigs, two iguanas, some chickens and several cats. Since the beginning of last year, he has sub-leased the rear portion of the property from Yellow Springs Botanicals, a start-up rare and exotic plant business sited on the front eight acres.

Among the 71 animals at the sanctuary are a bottle-fed goat who acts like a dog, turkeys named “Ben” and “Franklin” after the founding father who wanted the turkey as the national bird, two pigs who were almost a python meal when they were babies, a very vocal cat named “Boots” and one mean rooster. Hundreds more have spent some time there on their way to a good home.

The no-kill sanctuary is only for farm animals and what Ormes calls “working-class dogs,” such as Australian shepherds and collies, that have experience around other farm animals and can earn their keep by keeping predators away. He doesn’t accept cats, domestic dogs, native wildlife or exotic animals like lions and tigers, but he does help to find foster or permanent homes for abandoned animals he can’t take on.

Ormes said he needs help paying his annual costs of $2,500 for rent and utilities, and daily costs of $10 to feed the animals (not including donated feed). Plus, there are unexpected vet bills, rising insurance premiums and needs for items that would make the sanctuary sustainable, including a hand pump for the well and wind turbines and solar panels to go off-grid.

But to meet the constant demand for food, additional donations of dry or canned cat and dog food, bales of hay and bags of wild birdseed are always welcome. Volunteers, especially those with special skills such as trimming goat hooves, are always needed. And cash donations can always be made to the Greene County Community Foundation in the sanctuary’s name or at any US Bank location.

Thinking creatively, Ormes, a collector of primitive antiques and archeological artifacts, is now looking to offer some of his collectibles at a premium to generous donors. And he is eyeing the town’s aluminum cans, which villagers could donate in large quantities to Ormes instead of recycling them at the curbside so he could trade them in for cash. Ormes is available to pick up any donations.

Besides sheltering animals, Ormes wants to turn Ranch Menagerie into a habitat for native species. He plans to remove honeysuckle, provide beehives for the local honeybee population without any intention to harvest the honey, build and install bat houses and plant native trees throughout the property.

Through the Ranch Menagerie, Ormes also hopes to educate the community about the epidemic of stray, abandoned, neglected and abused animals. Ormes implores people looking for a pet to “Adopt, Don’t Shop.” Nearby shelters include the Greene County Animal Control in Xenia and the 10th Life no-kill cat shelter in Beavercreek. He laments that 90 percent of “cute little” baby chicks and ducks given as Easter presents end up dying of hypothermia. And he’s appalled that some government animal shelters immediately put down cats that aren’t a popular color. Above all, Ormes is passionate about the relationship between humans and animals.

“There would be no humankind without animals for clothes and food,” Ormes said, adding that throughout human history, animals have provided protection and helped with hunting, hauling and plowing.

“Before there were trains and cars, there were oxes, horses, mules,” Ormes said. Today there is a “disconnect” between people and the suffering of animals.

“There would be millions of vegetarians overnight if people had to kill the animals themselves,” he said.

The sanctuary is not open to the public. But visits can be scheduled by contacting Ormes at 937-231-1046. For more information, or to make a donation online, visit http://www.theranchmenagerie.org.