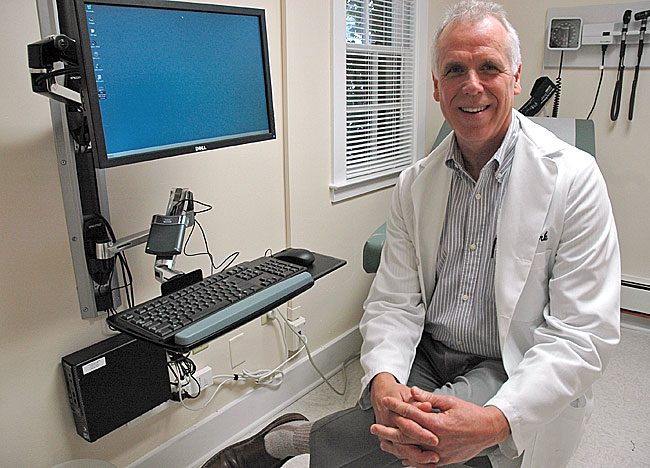 Dr. Alan Fark has set up his new family medicine practice at 716 Xenia Avenue. His office is under the umbrella of the Springfield Regional Medical Group. (Photo by Diane Chiddister)

The local arts scene — and specifically this week’s Chamber Music Yellow Springs concert — can take some credit for bringing a new physician to town.

At his previous job in northern Michigan, Dr. Alan Fark was looking for a change of location when a recruiter contacted him about the Springfield Regional Medical Group, which was seeking physicians to move to this area. While Dr. Fark wasn’t that interested in Springfield, “I perked up” when the recruiter mentioned Yellow Springs as a possible office location, he said.

Fark knew about Yellow Springs from his years as an undergraduate at Ohio State University, when he climbed rocks at Clifton Gorge. In later years he had biked through the village, and knew its reputation as a town with a strong appreciation for arts and music. And when he found that one of his favorite groups, the Minneapolis Guitar Quartet, was scheduled to play this week for Chamber Music Yellow Springs, he felt ready to seal the deal. So Fark signed on with the Springfield Regional Medical Group (and bought a ticket for the concert) and recently opened his office in Yellow Springs.

Fark — who will work in town Mondays, Tuesdays and Thursdays — opened for business just last week. While he doesn’t currently live in the village, he aims to buy a house or rent here. And he’s loving the benefits of working in a small town. For instance, last week on his lunch break he took a walk in the Glen; other days he walked downtown for lunch.

Fark is also pleased with his new office, the 716 Xenia Avenue location that formerly served as home for the Antioch College Revival Fund, and continues to house massage therapists. The building, owned by Bob Baldwin, is an old house which has now been outfitted with the newest technology. But it still has lots of natural light from its high windows and ceilings.

“I like that it’s a combination of quaint and high tech,” he said. “This feels like working in a village.”

He’s also pleased that the building houses massage therapists, he said, because he’s a believer in the importance of preventative medicine.

A physician for almost 30 years, Dr. Fark specialized in family medicine after he received his medical degree from the Medical College of Ohio, which is now part of the University of Toledo. He chose family medicine rather than a specialization because “I wanted to see a full range of problems. I liked always needing to stay on my toes, to keep learning,” he said.

For many years Fark worked in Michigan, where his wife had grown up. After several years as a general practitioner, he became intrigued by the faster-paced world of emergency medicine, and shifted to an emergency room, then directed an urgent care facility. But the faster-paced work also took a toll physically, and at this point in his life, Fark decided to return to a family practice.

He was also looking for a change in location due to the death of his wife from breast cancer four years ago.

“I needed a transition,” he said. And he chose this area because he has family — his mother and two sisters — nearby, in Vandalia. He has three grown children, a son in Japan, a daughter in college in Chicago, and a step-daughter in Grand Rapids, Mich.

He’s looking forward to getting back into family practice, which means addressing medical needs “cradle to grave,” he said. And unlike some family doctors, he enjoys working with children. And while Fark will only be in the Yellow Springs three days weekly, he plans to hire a nurse practitioner who will cover the rest of the week.

While Fark describes himself as a practitioner of traditional Western medicine, he is also open to his patients seeking alternative therapies.

“I have an open mind,” he said. “I wouldn’t be offended if people want to incorporate alternative health care.”

An increased interest in alternative medicine is one change Fark has witnessed since becoming a physician 30 years ago. Another is the growing use of technology. His office will take advantage of high-tech communications systems, and he uses Epic, a software that connects all the components of the Springfield Regional Medical Group — which includes imaging facilities, rehabilitation, home healthcare and a sleep center, among others — so that he’ll have immediate access to his patients’ records and test results from each facility.

Another change in medicine is the growing use of hospitalists, physicians who practice only in a hospital and take over for a patient’s regular physician when the patient is hospitalized. Unlike his practice in the past, Dr. Fark will not follow his patients into the Springfield Regional Medical Center if they’re hospitalized, but will collaborate with the center’s hospitalist to oversee care. While the practice of using hospitalists initially led to some communication difficulties between doctors, Fark believes communication has improved significantly over the years, mainly due to electronic breakthroughs. Overall, he believes patients benefit from the use of hospitalists because the hospital doctors have specialized knowledge of hospital systems and are available 24 hours a day.

The Springfield Regional Medical Center is a new facility that combines the resources of two former Springfield hospitals, Mercy Medical Center and Community Hospital. The overseeing body for the center is the Community Mercy Health Partners, which seeks ways to expand in the area, according to Christa Tutwiler, the group’s manager of employee and physician communication. The group feels excited about opening an office in Yellow Springs, she said.

“We’re glad to be able to offer our services to the people of Yellow Springs,” she said.