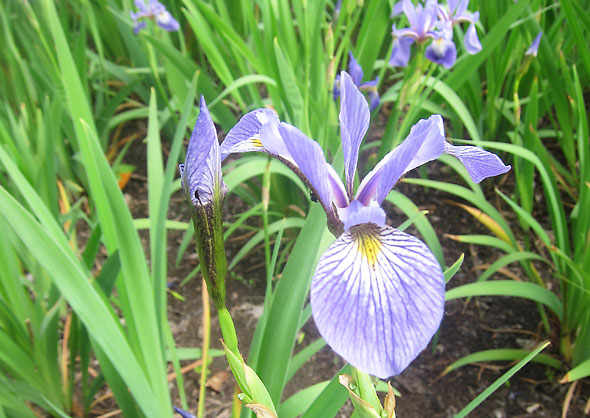 I had a marvelous opportunity this week to attend the dedication of the new Iris Garden at Cox Arboretum. A couple of weeks prior, volunteer coordinator Janet Metter asked if I could help hand out programs and snap pictures at Wednesday’s ceremony. I’m so glad to be asked I said yes immediately. 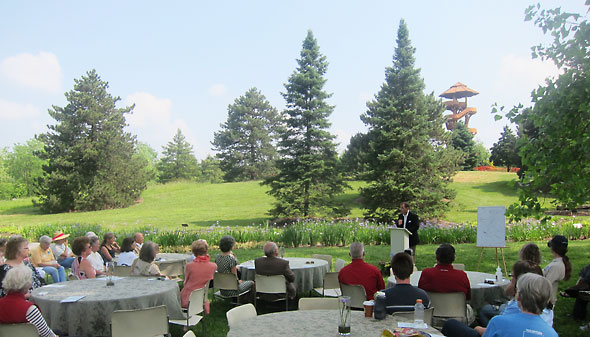 The weather Wednesday was gorgeous, and the garden’s blooms were near peak despite the heat of the week prior. Fellow volunteers from the arboretum’s Wildflower, Edible Organic Landscape, and Ornamental Grass gardens attended the dedication in force, and tours were given by horticulturist Rich Pearson and education coordinator Beth Burke. Many present shared their experiences with the garden’s transformation over the past three years. 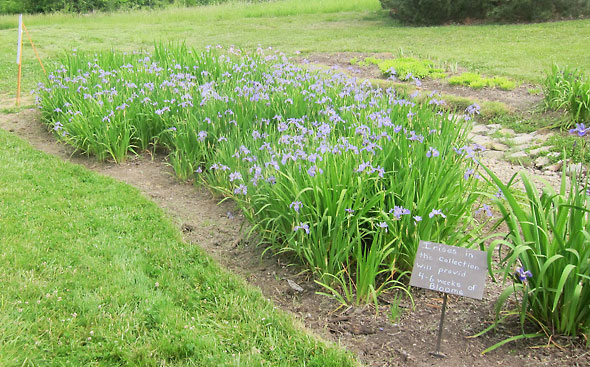 The garden had originally been envisioned as a host for Japanese irises. Unfortunately, the plants were unsuitable for the soil of the site, the soil pH being too alkaline. Shifting the focus of the garden to local conservation, horticulturist Rich Pearson researched Ohio cultivars and found three: Iris virginica, Iris versicolor, and Iris cristata. The first two are doing especially well handling both flooding and drought conditions. Other varieties on site include a gorgeous white Iris siberica and a brilliant yellow iris from the garden of local environmentalist and Cox co-founder Jean Woodhull. 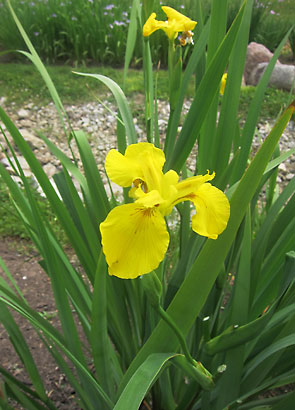 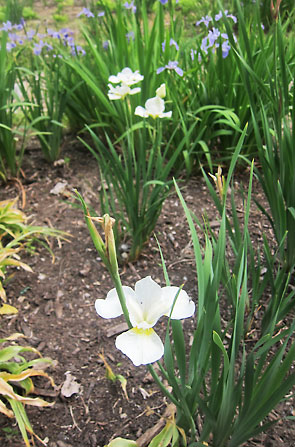 The dedication was originally scheduled for Spring 2011, but the arboretum postponed the ceremony due site conditions. According to the arboretum website, park volunteers established the garden in the Fall of 2010 by planting over 3000 irises. In May 2011, the creek’s beds filled with water and the surrounding ground saturated as Dayton experienced its third wettest spring on record. I witnessed Dayton’s second wettest spring and recall sending a friend a card of fish swimming complaining that it had rained single every day in May. 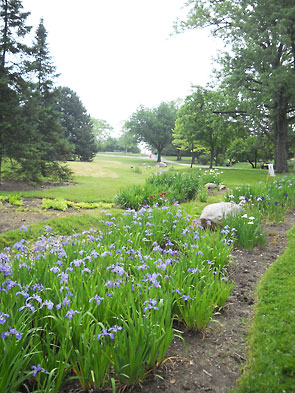 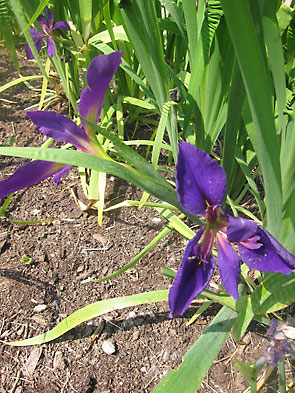 At this week’s ceremony, Rich Pearson recalled watching the water rise in the iris garden bed May 2011. He was immensely relieved when the beds held and no plant material was lost. In contrast, this spring has been dry, and yet the garden is flourishing. The garden’s design was a complicated task, but its success in extreme conditions speaks to the benefit of selecting plants appropriate for the drainage and soil type of the site. 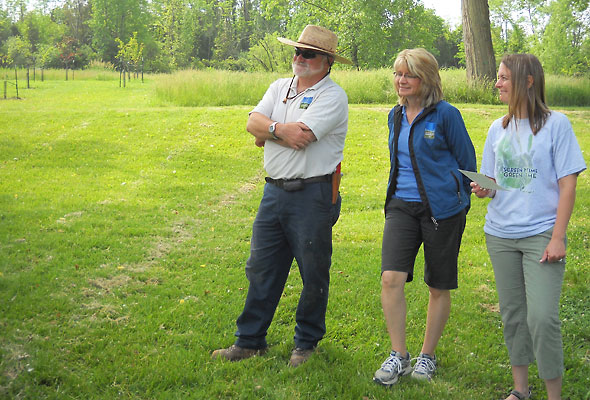 Rich Pearson should be familiar to visitors to the Corner Cone’s Saturday farmers market. Rich brings heirloom vegetables from his Xenia farm, Partridge Pear Gardens. His produce is a stunning selection of tomatoes, beans, eggplants, and squash. He promises to be at market starting July. This morning’s market is busting with a gratifying variety: radish, onion, strawberry, peaches, and a terrific selection of salad and wilting greens. I’m looking forward to combining the Hagstroms’ peaches with the spicy arugula from Patchwork Gardens. When Rich arrives, I’ll be stirring in his eggplants besides. 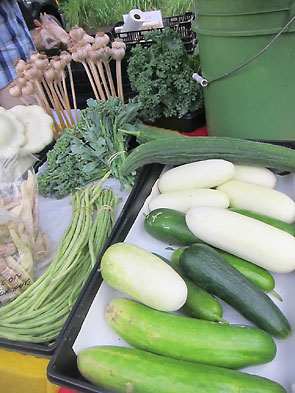 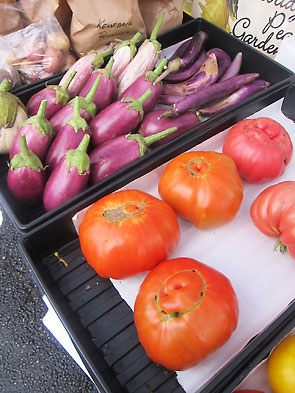 The Iris Garden will reward arboretum visitors who venture past the butterfly garden. The site stands between the new tree tower and bee meadow, so surprising discoveries abound. The garden is well marked with information cards highlighting interesting facts of the iris history, structure, and habitat. Rich told me that a core of 10 volunteers will manage the Iris Garden for the arboretum. 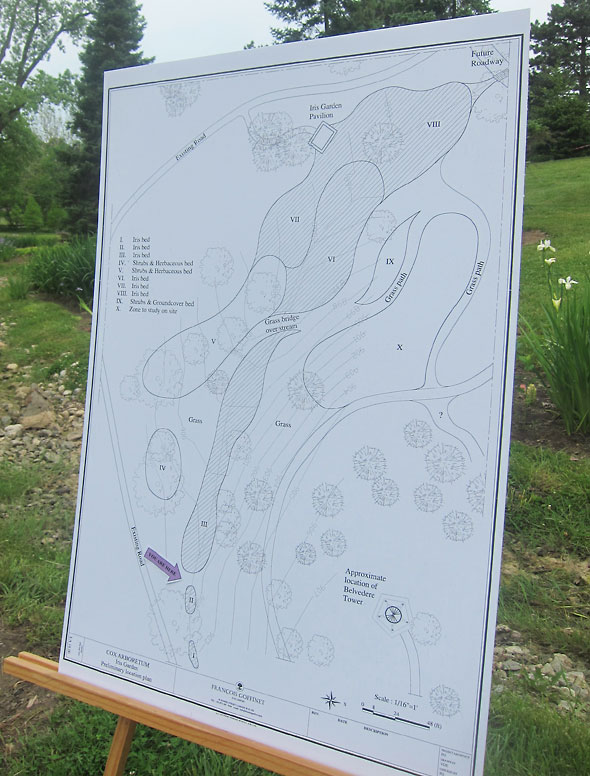 I hope to volunteer myself and assist in the garden’s evolution. The next phase will include the addition of hydrangea and ferns to extend the season of the garden. The arboretum plans to build a pavilion to draw visitors to the garden and entice them to linger. Wednesday I lingered in the garden myself happy to commune with the bees and sip the rainbow colors of the magnificent iris.