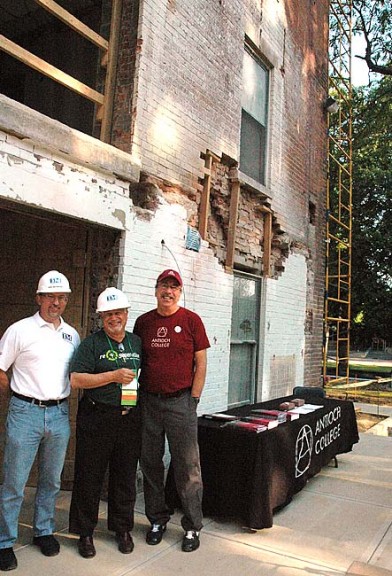 Last Saturday morning Karl McCartney of Thomas & Marker Construction, left, and Antioch College Vice President for Advancement Steve Sturman, right, led alumni, including Ron Winger, ‘64, of San Diego, on tours of the ongoing renovation of North Hall. The dormitory, constructed in 1852, is being renovated to achieve the LEEDS gold certification for environmental responsibility, and when completed, will be the oldest building in the country with that distinction. (Photo by Diane Chiddister)

To succeed with the revival of Antioch College, its leaders, alumni and community members must create a new culture grounded in “ownership, fearlessness and love,” President Mark Roosevelt told college alumni Saturday night.

“Fearlessness does not mean recklessness,” Roosevelt said, but rather “making big bets and making history, experimenting early and often and making failures matter.”

The very act of Antioch reviving itself as a residential liberal arts college, the only college of its kind to do so in today’s higher education landscape, is “an act of audacity,” Roosevelt said. “We are sailing against the wind.”

Roosevelt delivered his State of the College address Saturday night, following two days of activities, including awards presentations, presentation of a draft master plan and tours of the renovation of North Hall.

In his talk, Roosevelt emphasized that the college’s need for financial support remains its greatest challenge.

“Our job is to end the culture of poverty that caused Antioch to be less than it could be for decades,” Roosevelt said in the address. And due to the college’s small endowment and the initial lack of a tuition revenue stream, alumni contributions are the only source of income for the first several years.

“There’s a lot of folks out there who want Antioch to succeed who are hedging their bets,” Roosevelt said, stating that the college doesn’t need alumni support in the distant future, but rather, needs it now, within the next 18 to 24 months.

Roosevelt thanked all who have donated to the college, and especially the small number — Lee and Vicki Morgan, Atis and Judy Folkmanis, Barbara Winslow and the Drey family — who have gone “all-in” with contributions that reflect a huge commitment to helping the college succeed.

The college has made significant progress in the last year, Roosevelt said, but the road is still largely up hill.

One initial challenge the college successfully met is attracting students, especially critical for a school that has to wait four years, until its first graduating class, to receive accreditation, Roosevelt said. He described the offer of free tuition to the college’s first four classes as one of the best decisions leaders have made. More than 3,000 applied for the 75 slots for this fall’s incoming class, making Antioch “probably the most selective college in America this year,” Roosevelt said, citing Antioch’s acceptance rate of 5.1 percent of applicants, compared to Harvard’s rate of 5.9 percent.

The college continues to make progress in its process of achieving accreditation, and has also moved forward in defining the three C’s of its educational model — co-op, classroom and community. However, the revived college needs to do better in integrating co-op, classroom and community into a coherent whole, and in making clear the connections between them, Roosevelt said, stating that Antioch leaders need to stay focused on what the college does well, and then do it.

“We spent a clumsy amount of time figuring out who we are,” he said, until realizing that “who we are is staring us in the face,” referring to the college’s unique educational model.

“Everything else we are fits into that model,” he said.

Many wounds remain to be healed and significant obstacles remain, Roosevelt said, but the challenge of reviving Antioch College is “daunting but doable.”

An example of the college being “all-in” regarding its commitment to sustainable living is its renovation of the historic North Hall, which aims at achieving a LEED Gold certification for environmental responsibility, Roosevelt said. When finished, the building will be the oldest building in the country to obtain the LEED gold rating, a distinction currently held by the U.S. Treasury Building.

The $5.7 million restoration is the single largest capital project at the college since its independence in 2009, and, with 52 double dorm rooms, will double the college’s ability to house students. The project, which will be complete this fall, will also include a full-service kitchen, an apartment, larger bathrooms and a refurbished common area, according to a college informational pamphlet.

North Hall, built in 1852, was one of the college’s three original buildings, and at one time housed Horace Mann and his family, before their own home was complete. It was built as the women’s dormitory on the campus of one of the few colleges at the time to accept female students.

“These old buildings are critical to the history of the college,” Filoni said. “We believe they should be restored.”

And renovating North Hall to the LEED Gold standard makes a strong statement regarding the college’s mission and purpose, Filoni said.

A variety of steps are being taken to make North Hall energy self-sufficient. These include the installation of solar panels on the building’s roof, which will produce about 57,500 kilowatts annually, and using geothermal energy for heating and cooling. About 25 geothermal wells have been dug 600 feet deep on the Antioch Hall lawn to supply the water which will be pumped through the building to maintain livable temperatures, its natural 55 degrees cooling in summer and heating in winter, according to Karl McCartney of the firm Thomas & Marker Construction, at a North Hall tour Saturday morning. The firm is responsible for the building restoration.

Other energy-efficient components are energy-efficient lighting and controls, added thermal insulation on the walls and roof, water-efficient toilets and fixtures, ENERGY STAR rated appliances, carpets, finishes and furnishings made of sustainable materials and low or no-VOC emitting materials used in the remodeling.

A new vision for campus

A Chatauqua-like campus where cars are kept at the perimeter and people walk, bike or ride golf carts. A new tree-lined campus entrance on East North College Street, creating the feeling of a village lane. Some small houses built on the edge of campus to provide homes for alumni or others. A restored gymnasium shared with the Yellow Springs community. A campus in which all buildings are carbon neutral.

These are some of the ideas presented to college alumni last Friday by Pittsburgh architects Filoni and Hohlfelder, who have been working to create a campus master plan. Both men, who have worked on 40 college campus projects, emphasized that the plan presented was only an initial draft.

“No decisions have been made at this point,” Filoni said. “We’re trying to figure out the best way forward.”

The men have spent time meeting with faculty, staff and students in order to try to create a plan that reflects the mission of the college, according to Filoni.

“We take the mission statement seriously. This is not just about buildings and land,” he said.

Keeping cars off campus and walking or biking instead would not only enhance physical beauty but also mirror the college’s commitment to sustainability, he said. While closing down the campus section of Corry or Livermore Streets would be a significant endeavor, the plan suggests that a first step would be to use speed bumps or other strategies to “calm” traffic on those streets.

The current Livermore Street entrance to campus is not attractive, Filoni said, suggesting that arrivals could instead turn off Xenia Avenue onto a tree-lined East North College Street, which would be renovated to resemble a village lane.

“First impressions are important,” he said.

Restoring the historic center of campus — South Hall, North Hall and Antioch Hall (formerly Main Building) — will be critical to helping to enliven the campus, which will benefit from having a central focus.

“The key to making the campus feel active and unified is getting those buildings restored,” he said.

However, the plan proposes that, rather than providing office space, as it had in the past, Antioch Hall (formerly Main Building) become a “learning commons,” a place for students to gather, with the possibility of locating the college’s library on the building’s upper floors, since the current library building seems a poor candidate for renovation, he said.

“We’re not advocating getting rid of books,” Filoni said, but rather using compact shelving, which cuts the space needed to store books almost in half. Also, Kelly Hall would likely not be maintained.

Overall, the architects suggested being mindful of renovating buildings needed for the college’s target of 650 students and no more. On many campuses, colleges have “overbuilt,” they said, and they caution Antioch to avoid doing so.

McGregor and the Science Building would be adequate for classroom, studio and office space for that number of students, Filoni said, with administrative offices in South Hall. The architects also recommend keeping the current theater building as a performance space, Curl Gymnasium as a wellness center, and North and Birch Halls as residential space, with the possible need to build more residential space at some point.

Buildings which seem poor candidates for renovation are the Student Union, Spalt Hall, the art building and the library, he said.

The master plan also includes a two-acre space for a large solar array on the Antioch Farm, farm buildings, pens for animals and a small food processing plant.

The architects suggested that the college and Village of Yellow Springs could partner on the solar array, along with a sewage collection center.

“The town and the college could work together,” Filoni said.

Critical to master plan choices are whether the college takes its commitment to sustainability seriously enough to be carbon neutral, either producing its own energy or relying only on renewables, Filoni said, stating that no campus in the country has yet achieved that distinction. Energy efficient choices will be more expensive, he said, but will also serve to emphasize the college’s uniqueness and commitment to sustainability.

One Response to “Mix of big dreams, hard reality”