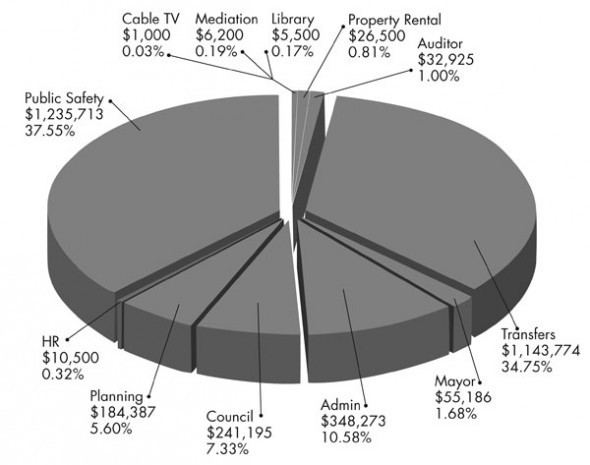 VILLAGE of YELLOW SPRINGS GENERAL FUND BUDGET 2013: The total Village general fund budget of $3.29 million breaks down into 12 different departments, the largest of which is public safety, or the Yellow Springs Police department. Transfers to other funds is the next largest piece, of which $552,582 for Village streets is the biggest expense, followed by $204,000 for facilities improvements and $272,000 for parks and recreation. Chart courtesy of the Village of Yellow Springs.

Village Council convened one last budget workshop last week before the first official public hearing on the budget takes place on Monday, Dec. 3, at the Bryan Center in Council chambers. Council plans to approve the budget in early January, much earlier than it has done in the recent past.

At their meeting on Nov. 19 Council continued to discuss the draft budget, agreeing to include at least $1 million in carryover for the general fund, which has a total budget of $3,291,153 for 2013. The budget is higher than last year’s expenses of $2,413,647, largely due to capital expenditures for water and wastewater infrastructure. The total general fund carryover of $2,116,940 is expected to cover the difference and still allow the Village to meet its capital project needs for the next three years, according to the budget forecast.
According to Village Manager Laura Curliss and Finance Director Sharon Potter, the state auditor recommends that municipalities carry reserves equal to 25 percent of their entire operating expense budget, which for Yellow Springs would be about $500,000.

“So $1 million is uber conservative,” Curliss said, comparing it to Greene County’s $12 million operating budget and $340,000 cash reserves, equal to just 3 percent of the total budget.

But Council President Judith Hempfling cautioned the village to look ahead a few years to 2015 when according to the forecast, the carryover starts to dip below the $1 million, and keeps going down from there.
“That’s how we came to decide on the $1 million figure,” Council member Lori Askeland said.

The only capital projects that need to be considered in the foreseeable future that are not covered in the budget forecast are the repainting of the water towers in 2015 and the 50-year-old Village water plant, which will soon need to be either renovated, replaced or circumvented in order to get village water from another source. The water fund is the one enterprise fund (outside the general fund) that is not currently self sustaining and could also need support in the future, Curliss said.

In other Council business from Nov. 19:

• Council discussed its goals for the coming year, based on principals from the village-wide visioning process. As affordable housing was a high priority from the visioning process, and the affordable development at the Barr property fell through, Hempfling suggested a focus on that issue. But the village needs to consider the need for development of all kinds, Wintrow said.

“We don’t have land for business development, elderly housing of any kind…development of any kind is very minimal,” Wintrow said. “Our needs are so huge that to focus on just one is [limiting]. We need to focus on how to get all kind of housing and business needs served.”

The Glass farm is a large piece of property that is currently being farmed and could be put to much better use for the community, Hempfling suggested. Lori Askeland added the Wright State University former clinic property as another vacant lot with potential.

“There’s a lot of opportunity for a plan to develop the Glass farm to meet many needs of the community, and affordable housing is just one.”

• The downtown Railroad Street property recently purchased by the Village has been regraded and signed and is currently open for public parking.

• Council plans to create a list of candidates to replace member Judith Hempfling, who said that for personal reasons she intends to leave Council in January, before the end of her term. Council will interview a short list of applicants, who must live in the village. Village Council members are expected to attend regular meetings on the first and third Monday evenings of each month, and participate as a member of two commissions.