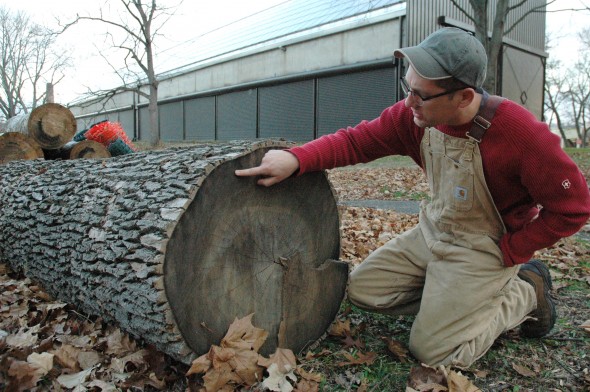 Local arborist Bob Moore pointed out the grain of a recently-felled ash tree log on the Antioch College campus, the site of an upcoming workshop on reclaiming urban lumber. Moore hopes to turn local ash trees, which are dying from the Emerald Ash Borer infestation, into long-lasting furniture and wood products. The workshop and sawmilling demonstration takes place at the Antioch art building at 10 a.m. on Friday, Dec. 7. (Photo by Megan Bachman)

Let furniture rise from the ashes

The coming decimation of the village’s ash tree population by an invasive Asian beetle — a kind of “Arborgeddon” for a tree that represents about one out of every 10 in our canopy — is a dismal story. Many beloved trees — on Mills Lawn, at the Antioch College campus, in the Glen — have already died. Others are showing signs of stress. Within a few years, every local untreated green and white ash tree in the path of the voracious bug will succumb, leaving dead trees to rot in place and, at some point, crash to the ground.
But the ash trees have a chance at redemption. Local arborist Bob Moore has a vision for the next life of the village’s doomed ashes: as tables, chairs, cabinets, and flooring adorning local houses, lumber for local building and wood for art projects. And with a group of local collaborators and a sawmilling workshop next week to kick off what Moore is calling the Heartwood Lumber Restoration Project, Moore is hoping the enthusiasm for reclaiming ash wood will spread just as fast as the Emerald Ash Borer has.

“We are losing a whole genus, fraxinus, and we’re not just losing one at a time,” said Moore as he pointed out dead and dying trees on a drive around the village this week, including 27 ash trees on the Mills Lawn campus alone. “It will be a totally different place.”

Native to Asia, the Emerald Ash Borer was unknown in this country until 2002, when it was discovered killing trees in southeast Michigan and Windsor, Ontario. Since 2003, the borer has begun making its way through Ohio’s ash popluation, putting some 3.8 billion ash trees at risk, according to the Ohio Department of Natural Resources. It was first discovered in Yellow Springs this spring.

Moore, a horticultural broker of 12 years and a licensed arborist for the last two, said he wants to “honor the life cycle of the tree” by turning local ashes into enduring products imbued with meaning, rather than watch them become wood chip mulch and firewood, which are both waste products.

Headlining the Heartwood Lumber Restoration Project, urban logger Dave Nelson will bring his portable sawmill to Antioch College for a workshop there on Friday, Dec. 7. Starting at 10 a.m. outside the Antioch College art building (accessible from Corry Street), Nelson, a custom miller and teacher of furniture-making at the University of Rio Grande in southeastern Ohio, will give a brief talk on how to harvest urban lumber and demonstrate ash woodcutting. The event is free and open to the public.

Villagers are fast lining up behind Moore’s vision. Antioch College has agreed to let Moore dry and store ash logs in its art building. The Village of Yellow Springs this week made plans to cut in logs and deliver to Moore the 15 ash trees it will take down from Village-owned property, starting with a large dead tree in front of the Yellow Springs Board of Education building. And the Antioch School pledged two initial ash trees from the many that dot its parking lot and playground. Local homeowners interested in donating their ash tree for the project should contact Moore at bobtheplantguy@gmail.com or 937-424-7467.

Moore urges that the time to decide the fate of your ash tree is now. That’s because once a tree dies and begins to decompose, the quality of the wood suffers. Also, the trees must be cut in 8–10-foot logs to be milled into lumber.

The choices now facing local property owners with ash trees are difficult, according to Wright State University biologist and villager Don Cipollini, who has been watching the borer make its way through town. Some villagers have elected to treat their ash trees with pesticides until the infestation wanes, at an estimated cost of $200–500 per tree every two years. Others have had trees removed before they became a falling hazard, which can cost from $500 to more than $1,000.

Unfortunately the easiest choice — to do nothing — is also the worst. Ash trees are particularly brittle, and when they do die, their branches and trunk will come crashing down within a few years, Cipollini said. Property owners should face the fact that all local ashes, with the exception of the blue ash found in the Glen, will die.
“It’s kind of hard to get people to accept that it’s inevitable,” Cipollini said. There’s a miniscule chance — no, an infinitesimally small chance — that they might have an ash tree that is resistant, which we haven’t found yet in the wild. It’s going to die in the face of this infestation.”

This year has been particularly hard on local ashes, Cipollini said. The signs and symptoms of infestation, including dieback in the tree’s canopy, the presence of exit holes on the trunk (shaped like a “D”), woodpecker activity and the presence of sprouts on the lower limbs of the tree, have become more obvious, and dead or dying trees are scattered around town. Next year will be even worse, he said. The peak of the ash die-off will take place either next year or in 2014.

But this sad reality has a silver lining as ash trees take on new life, according to Moore.

Moore’s first experience with reclaimed lumber came as a child growing up on a family farm on Clifton Road. There, felled cherry trees on the property were turned into boards and, eventually, a bench rich with memories.
“When I look at that [cherry] lumber, there is an emotional attachment,” Moore said. “It’s takes me back to a place that’s gone.”

Moore went on to study horticulture at Ohio State University, before becoming a container tree grower and horticultural broker. He now works for a landscape brokerage company, Listerman & Associates. Having spent most of his career on the nursery side, he is now interested in the “elder care” aspect of ash tree reclamation.
It wasn’t until this summer’s controversy over the removal of the Bradford pear street trees that Moore realized the extent of villagers’ love for trees and the sudden viability of his idea. The outpouring of support for the downtown trees, slated for removal as part of a sidewalk renovation, surprised him, he said.

“Trees that I didn’t think had meaning to people suddenly had meaning,” Moore said. “I started thinking, ‘How do I save the ash trees so they have meaning?’ I thought about a bookcase for my child or a piece of art.’”

The Illinois Department of Agriculture, for one, is promoting “Emerald Ash Board” for use in veneers, cabinets, furniture, millwork, and flooring, according to a brochure. Because ash wood is strong and tight-grained, it is often used in athletic equipment such as baseball bats, rackets, billiard cues, skis, shovels and oars. And since it imparts little odor or taste, ash is great for use in food bowls and spoons. Importantly, since the Emerald Ash Borer feeds only on the inner bark of ash trees, the vast majority of wood from affected trees retains these excellent lumber qualities, according to the brochure.

Valuable products can be created from ash wood, but that doesn’t mean that homeowners will be paid to cut them down, Moore emphasized. Log transportation and processing are expensive and labor-intensive, and furniture-making is a complicated craft. Commercial lumber companies harvest trees in volume and aren’t interested in taking down one tree at a time. For now at least, ash donations will fuel the project.

Moore is still figuring out how the once mighty local ash trees will find their next incarnation. He’s connected with area millers and kiln dryers, local furniture-makers and artists, and the schools. There may be furniture-making workshops, art competitions and local building projects in the future. He’s hoping wood workers will come out of the woodwork to contact him, because he’s eager to get started in the midst of ash tree despair.
“It’s totally depressing,” Moore said of the ash problem before noting its similarity to larger environmental crises. “Everything in environmentalism is pushing against and nothing is building for. The Emerald Ash Borer has been that. If I could just get a few examples, then hopefully people could see what could be done.”
For more information on the Heartwood Lumber Restoration Project, contact Moore at bobtheplantguy@gmail.com or 937-424-7467.