This Sunday, I attended the third annual “pre-graduation” party for local babies at the Bryan Center, just as I did last year. And just like last year, I’m now writing about it, though my intention is not actually to talk that much about babies.

But I will inevitably talk about babies at least a little, because who am I kidding?

As it happens, I sort of used the baby party to my advantage this year. I’m part of the current Community Voices class at WYSO, learning how to produce content for radio, and one of our first assignments includes taking a field recording kit, going out into the world and talking to strangers. Frankly, I must admit that I had a good deal of trepidation about this particular project. So I’m  not sure what made me think that the noise of a dozen toddlers in a gymnasium would be a soothing accompaniment to my efforts, but nevertheless, I decided to take my two-year-old in one hand and my microphone in the other and sally forth to the Bryan Center.

Arriving in the gym that afternoon, there were already quite a few families with small children present. After Lucy was settled with a toy and a tiny friend, I loafed around for a few minutes, stalling. The very idea of approaching a stranger (or, for that matter, a friend) and sticking a microphone in their face was growing heavy in the front of my mind. And apart from my mind, the idea was also producing a truly heinous flop sweat as I gathered my gear together.

I began to wonder what it is that makes it so hard for me to approach people sometimes. In this particular case, it probably had at least a little to do with the fact that I was walking around wearing big ol’ headphones, but I’ve had trouble with it since childhood. In fifth grade, as I recall, we were obliged to raise money for something called “Jump Rope For Heart,” which I believe involved going to people’s houses and asking them for money for the American Heart Association, after which we would go to school and jump rope for a while? I still don’t totally get it, but whatever, it was for a good cause.

My sister and I canvassed the neighborhood together, which was probably good for our safety, but not so good for us as competitors in the fundraising world, which we totally were. As everybody who’s ever done a school fundraiser knows, the more funds you raise, the better your chance of getting a cheap plastic incentive prize, like a Fozzie Bear pencil topper or a mini-Slinky. Clearly, the two of us were going to be splitting everything down the middle.

The most memorable house we went to was right down the red clay street from ours, a large edifice that, in my memory, has a touch of the Bates Mansion about it. Whether this was true or not, indisputable is the fact that there were goats and guinea fowl running about the property. We wandered around the yard for a while before knocking on the front door. After a minute or so, it creaked open, and we were shown inside by a white-haired woman in an old dress. The interior of the house looked somewhat dingy and ill-lit, almost like a faded photograph. And there were pigeons. Lots of pigeons. Some in cages, some very obviously not in cages. It was quiet in there, aside from occasional cooing and the fluttering of wings, and there were large stacks of newspaper stowed in corners.

I have the vague recollection that the lady was really nice and that she gave us both money and introduced us to the animals outside, but I couldn’t help it: the interior of that house had scared any daylights I had, living or otherwise, right out of me. I had seen just enough Hitchcock by that point in my life to know it was a perfect setting for some horrific nonsense.

And it was then that it occurred to me that our teachers and parents were sending us, a bunch of unaccompanied children, to the doors of strangers to ask for money. Parents of America: are we still doing this? This can’t still be a thing, right?

As it happens, the practice continued throughout my public school career. The big fundraiser for band in high school was the annual sale of 10 pound bags of Vidalia onions. Our band director, may he rest in peace, was a ball-buster supreme, and during onion-selling time, he used to go around the room and make each of us report how many bags we had sold so far. A perennial procrastinator as well as socially awkward, I was never a good seller, and when it came around to me to tally up my sales, I would always lie. Sometimes it was a good lie; three bags isn’t hard to pull off, even for somebody like me. Sometimes, though, the numbers from the rest of the class would be high, and I’d have to up my nonexistent ante. And by the end of class, I realized I was now going to have to sell 150 pounds of onions to people I didn’t know. High school was the worst.

But what does this actually have to do with interviewing other parents at a baby party? Well, I may not have been asking them for money, and I certainly didn’t have to walk into their potentially creepy, bird-laden homes, but I did have to ask them for something. First, I had to ask them to stop what they were doing and acknowledge me. And second, I had to ask them to listen to me, to answer my questions, to speak naturally and honestly, with the full knowledge that their words and voices are going to live on somewhere outside themselves, and, outside of some kind of reconnaissance caper to retrieve the tape and destroy it, they would be powerless to stop that once I began recording. Why couldn’t I just go up to someone, easily, with confidence, and introduce myself, and say, “Can I have a minute of your time?”

I looked over at Lucy as I was going to approach the first cluster of folks. She was in the middle of some sort of negotiation with another child. Both children, neither of whom knew each other very well, were inspecting a toy very closely, poking at it, apparently comparing notes. These two were having no trouble at all talking to strangers. Seemed like a breath of fresh air to them, in fact.

Well, I kept telling myself, “If my two-year-old can do it, I can do it.” Which isn’t entirely true, because I could never bring myself to pile up all my Little Golden Books in a corner of my room and urinate on them, but we all have our calling. Talking to people I don’t know isn’t my calling, either. But it doesn’t mean I can’t work at it. I brandished my microphone and walked on. 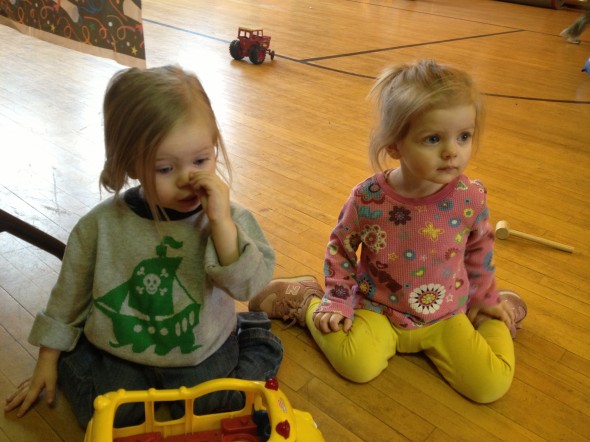 Lucy and Rudy Mae: “We will sell no onions, lady. Not now, and not ever.”