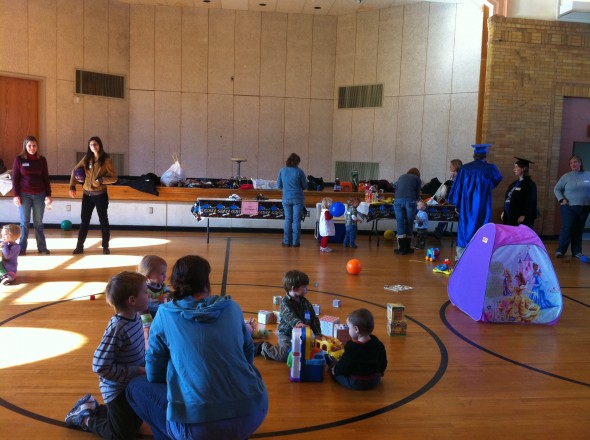 The second annual "pre-graduation" baby party, which was held Sunday, Feb. 5 at the Bryan Center.

Last Sunday was the second annual “pre-graduation” party for local babies who will graduate in 2027, ’28 or ’29. The party was organized by Eric and Jackie Clark and held at the Bryan Center. (For a full story on the party and other baby happenings about town, go here.)

This party is something I had looked forward to for quite a while, for many of the same reasons I look forward to taking my almost-18-month-old, Lucy, to playgroups about town each week. Not only do these events mean the freedom of play for the kids, they’re a breath of fresh air for parents, who are given the chance to talk to other human adults. We can even sit down sometimes. The baby party was this, times ten. Plus snacks!

I remember the exact moment when I had my first pang of maternal desire, the first time I ever was sure that I really wanted to have a kid. I was 23, living in Lexington, Ky. and working at a bakery, when a woman came in with her baby. That’s it. No big revelation, no cute story. I saw a mom and baby together, and for the first time, the idea of parenting didn’t seem like a soul-crushing punishment for those who had clearly gotten something wrong in life.

Cut to five years later, as I’m standing in the Bryan Center gym with a small group of other moms. We’re talking, but none of us are really looking at one another, as our eyes are all fixed on our respective children, little points of energy that skitter furiously from one end of the room to the other, in constant motion. Conversation among parents with young children is a different class of talk entirely. The first unwritten rule of talk amongst parents is that you only really get about 80 percent of a person’s attention, for the reasons mentioned above. You must also, as either speaker or listener, be prepared to lose your audience at any moment, as the other party or parties may need to suddenly run away to stop a small person from shoving a Cheeto into an electrical socket. 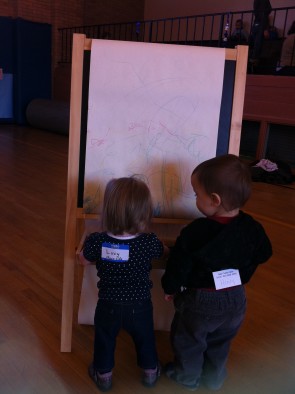 Likewise, the topics of conversation seem to follow a common theme. That is to say, you mainly talk about babies and other baby stuff. In this way, getting parents together is a lot like holding a baby convention. We are nerds for our babies. In the common sense of the world, being a nerd means having a marked interest in something that’s counter to what’s popular. For that reason, being a nerd is something of an isolating experience. You end up surrounding yourself with people who have the same interests that you do, because they understand and facilitate your need to talk and think about these interests constantly. Nerds pride themselves on their knowledge of minutiae, on their collection of interest-based paraphernalia and just liking what they like more than other people do. All of this necessitates being part of a community of like-minded individuals.

As baby nerds, parents are sometimes further isolated in that they may have moved away from their own home and families to raise their kids someplace else. Several of the parents at the baby party, like myself, are not Yellow Springs natives. Which puts us all in the unique place of raising people who will not be “from” the same place that we are. My childhood, for example, is not peppered with memories of cornfields, just as Lucy’s memories will not contain all that many images of days at the beach. Our childhoods will not look the same, and there’s something very interesting and very sad about that for a parent, I think. 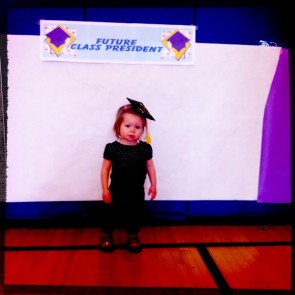 But looking into the gym on Sunday was like looking into the future (which is something else nerds love). As the kids navigated the room, negotiating with one another, sharing or arguing, taking or giving, I could clearly envision them all getting taller, their words becoming more distinct, their voices clearer. I could see their attitudes changing, their interactions with one another augmenting. It’s unlikely that our kids will remember anything about the day, but I will. I’ll look back, and recall how, at that moment, I was looking forward. In the future, I’ll tell my old memory self how things turned out. I will tell myself that I was right: it was always worth it to be such a nerd.