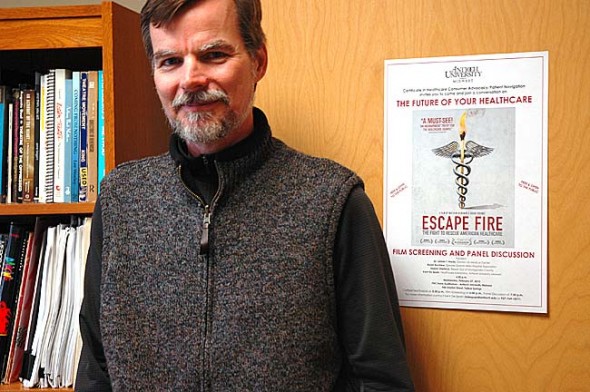 Antioch University Midwest is sponsoring a free documentary, ‘Escape Fire: The Fight to Rescue American Healthcare,’ at the school on Wednesday, Feb. 27 at 6 p.m., with refreshments at 5:30 p.m. Shown above is Kent De Spain, the new chair of the school’s program for healthcare consumer advocacy/patient navigation. (Photo by Diane Chiddister)

The American health care system is so broken that fixing it requires far more than tweaking what’s already there to make it work better. Rather, the system requires a major conceptual transformation, according to Kent De Spain of Antioch University Midwest’s department of human development, health and wellness.

“The primary question is, why are we spending so much after people get sick instead of preventing illness?” he said in a recent interview.

A significant health care overhaul will take place only after citizens demand it, De Spain believes. And he and AU Midwest are doing their part to help spark that conversation.

The documentary film Escape Fire: The Fight to Rescue American Healthcare, a free screening and panel discussion, will take place Wednesday, Feb. 27, at the PNC Bank Auditorium at AU Midwest, 900 Dayton St. The film will screen at 6 p.m. (with refreshments at 5:30 p.m.) and the panel discussion will begin at 7:30 p.m. Panelists include Dr. James Hardy of the Dayton VA Medical Center, Bryan Bucklew of the Greater Dayton Area Hospital Association, Sharon Sherlock of Reach Out of Montgomery County and De Spain, the chair of the AU Midwest Healthcare Advocacy and Patient Navigation program. The program is open to the community.

Created by Emmy-nominated Matthew Herneman and Oscar-nominated Susan Froemke, the film “examines the powerful forces maintaining the status quo of a medical industry designed for quick fixes rather than prevention, for profit-driven care rather than patient-driven care,” according to the film’s website, http://www.escapefire.com.

The film focuses on the stories of patients and physicians caught up in what seems an irrational system, although according to the New York Times review, “This hard-hitting film leaves us finally more hopeful than despairing.”

Bringing the film to Yellow Springs ­— its first screening in Ohio — is a step toward opening a conversation among people who have traveled through the health care system with doctors and hospital administrators, all of whom have something at stake in improving our national health care.

“If we don’t get everyone talking to everyone else, we won’t get the systemic change that we need,” De Spain said.

The Feb. 27 event is De Spain’s first public event since he took over the position formerly held by Jane Brown, longtime AU Midwest faculty who retired last summer. The film and discussion bring together two subjects he cares deeply about: health care reform, and people telling their stories to facilitate social change. A former professor of theater and dance, De Spain was teaching at Oberlin when he began traveling to Yellow Springs on Wednesdays to take part in the program of healthcare consumer advocacy/patient navigation that Brown began. And when Brown announced her retirement, De Spain applied for her position.

Regarding his own transformation from a specialist in theater and dance to one in health care advocacy, he said, “There’s a need. I think my skills in storytelling can make a difference.”

De Spain’s interest in health care reform began several years ago when, living in Austin, Texas, he received a phone call from his doctor telling him that he had cancer. De Spain’s first response was “What do I do now?” but he had no idea where to turn, nor did his doctor suggest that there might be someone to turn to.

“It seemed kind of crazy,” De Spain said. “Millions of people had gone through cancer and survived,” but there was no one to help guide him through the dysfunctional health care system.

That experience opened to De Spain the need for advocates for healthcare consumers, and when he heard of the AU Midwest program, he signed on, driving once a week from Oberlin to Yellow Springs to receive his own certification as an advocate. It’s a new field but one that will grow quickly, he believes, with new pressures on hospitals, such as the Healthcare Reform Act, to pay attention to the quality of patients’ experiences. And while several online programs offer a program in healthcare consumer advocacy, AU Midwest is one of the few that requires its students to be on campus to attend classes each week. The year-long program also requires of its students 80 hours of experience working in a health care setting.

The program seeks to produce professionals who have expertise on several levels to make the journey through the healthcare system a more satisfying and effective one for patients, De Spain said. The advocates learn the “cultural competency” to communicate successfully with doctors, Medicare providers and insurance representatives. They also are taught communication skills and crisis management to help smooth communication efforts during high-stress times.

“Sometimes when someone’s life is on the line, emotions rise,” De Spain said. “The advocates need the skills to bring all the parties back to the table.”

And finally, the advocates also help patients to learn new communication skills, “to help people articulate their needs and get the health care they deserve,” he said.

Regarding the upcoming film and panel discussion, De Spain invites villagers to come and bring stories of their own experience with the health care system.

“We want to hear the voices of Yellow Springs,” he said.