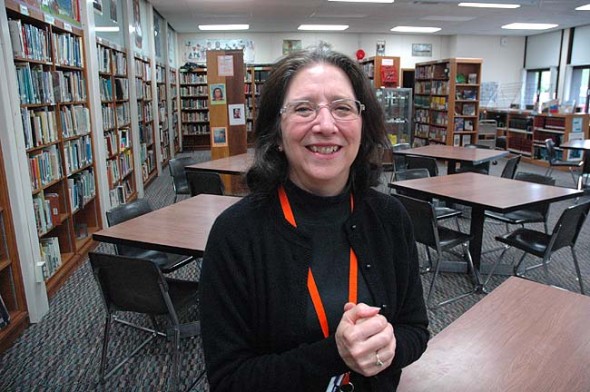 Yellow Springs School’s librarian Mary Ann Christopher retires this month after 25 years with the district. Christopher, who lives in Beavercreek, spent 16 years in the library. Here she stands amongst the stacks she helped cultivate at the YSHS library. (Photo by Megan Bachman)

The right book in the hands of the right student can be magic, says retiring school librarian Mary Ann Christopher. Whether reading to first graders, helping high schoolers with research or stocking the latest young adult fiction, Christopher hooked many a student on books in her 16 years as the librarian of Yellow Springs Schools.

“The library should be the heart of the school — it should touch every class,” Christopher said in an interview this week.

After 25 years with the district and a teaching career that began in 1972, Christopher retires at the end of this school year.

Christopher taught in Arkansas and Georgia before moving to Beavercreek when her husband was relocated to Wright-Patterson Air Force Base. She taught math and English at Yellow Springs High School, then moved into the library when she saw an opportunity to use her love of books — not to mention a library media master’s degree specialization — to move education forward.

“You could see the writing on the walls that the library was changing and the way people would teach is changing,” Christopher said. “Kids would do more research and there would be more emphasis on technology.”

First at YSHS/McKinney, and in the last three years at Mills Lawn, too, Christopher oversaw the transformation of education in the digital age. There was still a card catalogue when Christopher started. In recent years she taught third graders how to share work on Google Docs, led first graders through the picture version of an online card catalogue, and admonished older students about the risks of Internet research.

“My students know not to say Wikipedia in front of me because they know they’re going to get a lecture,” Christopher joked.

Despite a trend toward more digital resources, Christopher said she believes brick-and-mortar libraries continue to have a place in schools. Many students who don’t have mobile devices or computer access at home rely on libraries. Books are here to stay, according to Christopher, and it’s the younger children who don’t read at home who need libraries the most.

“Sometimes we’re the first introduction to books for those kids,” Christopher said. “There’s something magical with watching a group of little ones who are so into that story, leaning in, then at the end they all clap. If you want to grow readers, that’s where you start.”

Still Christopher sees that a one-to-one computer-to-student ratio would be ideal, and technology can be a boon to classroom learning, as long as it doesn’t become a crutch.

“I can certainly see good uses for technology, but I don’t want us to ever get to the point where teachers say ‘I can’t teach today’ because the technology goes down,” Christopher said.

In the face of these technological changes — not to mention budget cuts — some districts are doing away with librarians. Just in the last year 90 librarian positions were cut in Ohio schools, according to Christopher. Because of this, Christopher was initially hesitant about retiring, fearing that she would be the school’s “last librarian.” But she was pleasantly surprised when she learned her position would remain. She said the school librarian is vital in updating the stacks with new material and providing classroom and research support.

Over her library career, Christopher learned to do more with less. When Christopher started in Yellow Springs there were full-time librarians at both YSHS/McKinney and Mills Lawn and each had an aide. Today, Christopher splits her time between both schools. While teacher coordination has been more difficult, she still manages to work closely with the teaching staff. And though budgets for new books are tight, Christopher has organized book fairs and secured donations from the Yellow Springs Community Library to keep stacks current. She has also, as a member of the Southwest Ohio Young Adult Materials Review Group, stayed abreast of the latest books.

The decision to retire did not come easy. But Christopher, 62, was motivated by several factors, among them statewide changes to retirement benefits, a one-year-old granddaughter, a second home on the Ohio river, and the district’s move to project-based learning. While Christopher had planned to retire at 65, she is leaving early so that her replacement, who will take an intensive summer training in project-based learning, can see the transition through, she said.

Leaving is bittersweet for Christopher, who will miss the moment when a book changes a life. To her, the job’s greatest joy has been watching students’ faces light up when they realize they can do a math problem, or when they just finished their favorite book and want more, leading to a question Christopher said she loves to get:

“They then come to me and say ‘This is the best book, do you have one just like it?’”