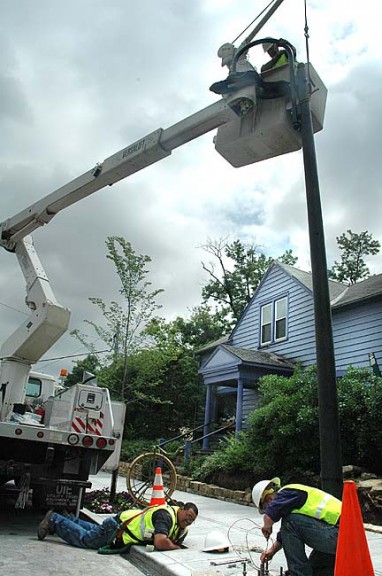 Downtown lighting gets a makeover

The Xenia Avenue streetlight changes were a component of the streetscape renovation that began with the repair of subpar sidewalks in front of The Winds Cafe and Dino’s Cappucinos, along with the removal of aging street trees, and the addition of new trees this year. While the original plan for streetscape changes proposed by Village Manager Laura Curliss last summer included new lights for all of downtown, the final plan was downsized to just the area where the sidewalk was repaired.

However, the crew will install the new streetlights, which are more energy efficient than the current lights, up and down Dayton Street in upcoming weeks. The lights were chosen by landscape architect Roger Beal several years ago when the Dayton Street area was renovated, but that project was put on hold for several years. As well as being more efficient, the lights from the new lamps is more focused on the sidewalk, and less light is lost to the sky, according to Curliss.

The cost of the new streetlights, about 22 in all, is about $96,000, which will come out of the Village Electric Fund.