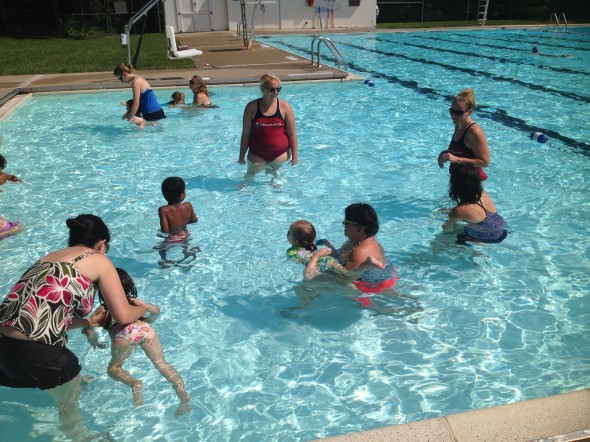 A small gaggle of kids of all ages will gather at Gaunt Park Pool for the next two weeks for swim lessons. I was on hand with my daughter, Lucy, for the level one beginner class. (Photo by Anthony Fife)

I never had swim lessons when I was a kid. Well, technically, my dad taught me, but he taught me to swim the same way he taught me to play guitar: “Here, do your hands like this. Good, now figure the rest out on your own.”

As a result, I can swim to save my life, but with perfect awareness of my less-than-perfect technique, which combines the paddle of a dog and the leap of a frog with the labored breathing of an out-of-shape mom. (In case you were wondering, I can’t actually play guitar to save my life, but I could accompany you on the chorus to “Breakfast at Tiffany’s” at your local open mic night in a pinch.)

Nevertheless, swimming has always been one of my all-time favorite things to do. I remember very clearly, at the age of 8, the euphoria with which I watched my dad (my poor, poor dad) dig out the level circle of ground which would sit beneath the new above-ground pool in our rural Kentucky backyard. That summer was the stuff of kid dreams: long hours floating in the back yard with my sister and my best friend; dripping wet trips to the corner store to buy sandwiches and pop from the deli; storing those sandwiches in the ancient, abandoned lead-lined refrigerator beside the pool, which we would also occasionally play in.

All of that stuff I just mentioned, by the way, was done with what, in my memory, seems like a surprisingly low level of adult supervision, and is now the stuff of my frequent, neurotic nightmares. Then again, the memory of a child seems to frequently edit out the roles of nearby adults, so as far as my memories are concerned, I apparently raised myself. Which means I have no one to blame for my hair and wardrobe but myself. Mom and Dad, you’re off the hook. 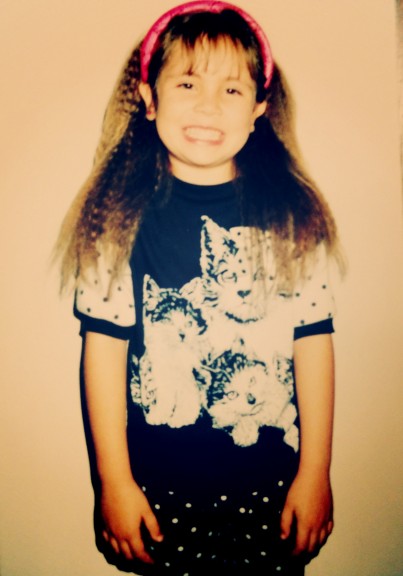 Seriously, somebody needs to be held accountable for this.

That was also the summer that I figured out how to do what I called “mermaid feet.” That is, crossing your legs at the ankle, so that your thighs are pressed together and your crossed feet form what your 8-year-old mind thinks looks a lot like a mermaid’s tail. This discovery was prompted by my having seen Disney’s beloved 1989 version of the terribly sad bait-and-switch tale by Hans Christian Andersen. (In Disney’s version, the eponymous mermaid loses her fins but gains a hot dude, impaling a giant sea witch in the process. In Andersen’s version, the hot dude runs off with somebody else, and the mermaid flings herself off a mountain and becomes some kind of beach angel trying to earn an immortal soul, and every time a kid is bad, she has to work longer to gain her soul, and then you realize you’ve just read this whole tragic mess so H.C. Andersen can tell you to be a good girl and eat up your peas or the mermaid will never get her water wings or whatever. Bait. And. Switch.)

Anyway, I spent that whole summer fantasizing that I was a mermaid. I liked the movie, sure, but it was really the idea of being able to navigate the water with ease that so interested me. Turns out that putting your ankles together doesn’t do anything to promote said ease for humans, but it was fun to pretend.

My two-year-old (almost three-year-old) daughter, Lucy, has inherited my love of swimming (and, it turns out, mermaids). She wakes up in the morning begging to “go to da pooooool!” And as often as I can, I oblige. I’d like to pretend that it was pure, selfless parenting, but I’m just as disappointed as she is when we go to the pool and the sound of thunder orders everyone out of the pool for 30 minutes. And I’m just as whiny as she is, too, insisting that it was probably just somebody’s garage door in the distance.

This week, Lucy began her very first pool lessons. I took off an hour from work on Monday and Tuesday to accompany her, along with dad Anthony. Having, as previously mentioned, never taken swim lessons, I hadn’t a single, mermaid-footed idea about how one goes about teaching a toddler, who barely speaks English, how to swim.

Turns out that swim classes for toddlers are a lot like any other kind of class for toddlers, but considerably wetter: there was lots of singing, accompanied by hand motions. There were toys handed around. There was, of course, a minor amount of horseplay. Inbetween these things, the kids were instructed in short spurts of leg-kicking, underwater arm-waving and bubble-blowing, and in my kid’s case, howling when myself or Anthony even remotely suggested we might lie on our backs in the water. Whatever, we all have our vices; one of mine is that I still call it “mermaid feet,” even though the whole point of mermaids is that they don’t have feet. The little ol’ mermaid herself can’t even remember the word “feet” in the Disney version, so it’s clear that I wasn’t paying very close attention to the film’s themes, but in my defense, I was probably distracted by the singing crab.

Aside from the fact that I get to play hooky from work, I love the fact that my kid will learn to swim better than I do. I am thankful for the endlessly patient lifeguards/swim teachers; thankful that I live in a community that offers its children free swimming lessons. I loved my rather isolated, rural childhood with my sandwiches and backyard pool, and also my adolescence, growing up on the Florida Gulf Coast, minutes from the beach. But there’s something about knowing my kid will grow up learning to swim beside the same kids, and will go on to learn to read, write and hopefully be a lot better at math than I am with those same kids. As soon as she hits third grade, I’ll have her do all my banking.

There is, of course, one thing that the swim instructors don’t teach at swim lessons, but that’s okay. We’re working on it at home. 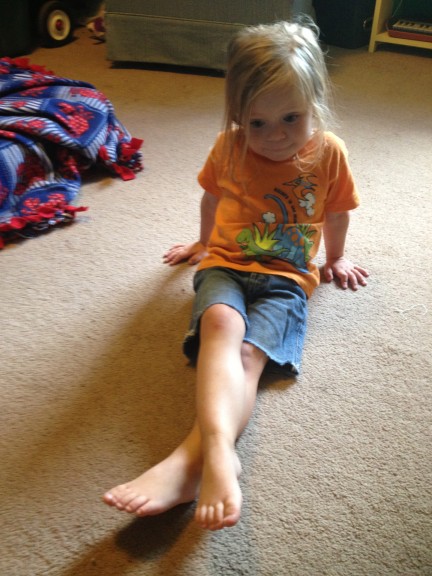 A master of mermaid feet.