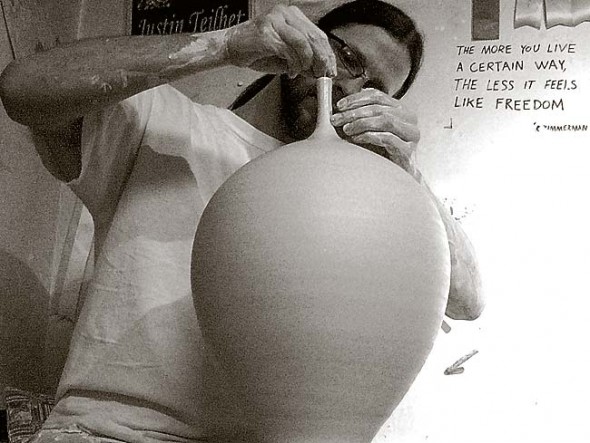 While the work produced by local artists Justin Teilhet, Michael Casselli and Migiwa Orimo has little in common, all three recently received Individual Excellence Awards from the Ohio Arts Council (OAC). The awards, which include a monetary prize, are meant to “recognize creativity and imagination that exemplifies the highest level of achievement in a particular discipline and advances the art form,” according to the OAC’s website. Yellow Springs was also represented in the organization category, with a grant going to Community Media Productions, Inc. for their creation of ReInvention Stories, an interactive, nonfiction storytelling website about Dayton.

“The Individual Artist Grant is a fantastic program,” said Orimo. “It’s based on the merit of the work sample and an artist’s statement. It’s not about connections or your education. It’s recognizing the work on a pure base.”

Because much art is a material-intensive endeavor, and such materials — especially technology — can be expensive, monetary awards such as the OAC’s can make a big difference in an artist’s capacity to successfully produce their creative visions.

“It can really change your life,” Orimo said. Having won the award three times over the last 10 years, she was able to use the money for capital improvements, particular projects and expensive materials.

As a fellow multimedia, interdisciplinary artist, Casselli agreed. “I’m thinking about how I really want to spend that money,” he said. “I’ll be using some of it to improve my space and put together a space that could be used as a presentation space for other artists as well as a studio.”

Winning two of the three available awards in the Interdisciplinary category, Orimo and Casselli were required to submit three different pieces from their last three years of work.

For Casselli, this included footage of Slackwire, which he described as “a high voltage sparking piece” in which two bare wires are suspended from the ceiling and slope to the floor, with smaller pieces of music wire attached to them. Charged with 15,000 volts, the wires begin to oscillate as the electricity moves and dances between them, according to Casselli.

“I work a lot with the idea of desire — something you find attractive,” he said. “How close are you willing to get to something you want?” This piece expresses that idea since many times people are drawn to the wires but realize that getting too close can be dangerous.

In Orimo’s case, questions of memory and place are central to her work. This includes what she calls “slippage” or the space between people’s personal recollections and government or official accounts of an event, and also the role of the internet in remembering.

“I’m interested in the internet sphere of memory-making because it’s memory being outsourced in a way, but we’re also memory-making together, collectively,” she said.

In particular, she has been working with the 2011 earthquake and ensuing nuclear disaster in Fukushima, Japan.

“I was not there during the actual disaster, so my relationship for witnessing and remembering is through the Internet,” she said.

With this in mind, Orimo followed an entire year of online press conferences by Tepco, the nuclear plant owners, and made sketches of them during their presentations. She then paired the sketches with footage taken from a live camera feed that showed 24 hours at the Fukushima plant a few months after the disaster.

“These are not artistic drawings” she said of her final work “I wanted to be like a court artist. It’s stamped with dates, to create the idea of a record. I am a witness.”

The Internet has also played an integral role in Community Media Production’s (CMP) project ReInvention Stories. Unlike the individual awards, organizations apply for funds based on a specific project, presenting a timeline and specific budget. However, the process happened a bit differently for CMP.

“We kind of got in over-the-transom so to speak,” said Julia Reichert, the organization’s co-founder “We called, made a proposal and they said yes, so it was kind of a special project grant.”

The grant was used to fund the complex computer programming required to create the interactive, nonfiction storytelling website Reinventionstories.org. “We’re very grateful to the OAC, who always finds ways to come through for people when they need it,” said Reichert about the impact the funding had on their project.

Web design, and particularly interactive websites, was new territory for Reichert and her partner Steve Bognar, both of whom are documentary filmmakers, and so the project created unique challenges for them.

“It was very difficult to wrap your head around a short form as opposed to a long deep experience,” said Reichert. “We don’t even talk about an audience on the web — you have to think about a person in front of a computer with 10,000 other things they could do at that second” and find ways to engage them in your work.

This being the case, the interactive nature of the website is of particular importance. On the site, people can listen to and watch the stories of different Daytonians who have struggled to reinvent themselves over the past few years, while also cruising footage of Dayton’s streets and answering questions such as “what gives you hope for Dayton?” One can see others’ answers and also interact with the footage of Dayton to learn more about the events that occasionally pop up on the screen during the virtual tour.

“It’s really about a back and forth with the audience, or user,” said Reichert. “Hopefully it will keep going and be of use to the city in some way.”

While people from all over the world can interact with Dayton through Reinventionstories.org, villager and potter Justin Teilhet must travel all over to showcase and share his ceramic work. His itinerary in the past year has included Miami, Florida, St. Louis, Washington D.C., Chicago and New York City.

“It’s a crazy, crazy, grind but I enjoy it,” he said, noting that even though each trip requires extensive set up and take down of displays, he gets to travel all over the country and spend time with friends along the way.

When he’s not on the road, Teilhet works in his studio near Clifton while also serving as an adjunct at Stivers School for the Arts in Dayton. He submitted and won in the Craft category, which required a set of twelve images of recent work.

In addition to creating more sculptural work, Teilhet has become interested in the relationship between pieces and has started creating what he calls “compositions.”

“They’re three pieces sold as one,” he explained, “but they’re arranged in a particular way. It’s about a conversation between objects, the negative space and the interplay between them.”

Although his work is made with traditional methods, and most of it is done on a potter’s wheel, Teilhet uses porcelain clay and strives to create a contemporary feel with his final pieces.